Posted in: Disc Reviews by Brent Lorentson on November 5th, 2014 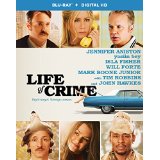 This has been a review that has taken me a while to get to, not because it’s something I was dreading, but instead it had me revisiting some other Elmore Leonard adaptations to the screen.  There have been countless adaptions of Leonard’s work on the big screen as well as television.  Whether it’s his westerns 3:10 to Yuma, Justified or Hombre or his work on crime Jackie Brown, Out of Sight, and Get Shorty, there is a good chance at some point you’ve seen Elmore’s work, and those were just a handful of titles I mentioned.  I was a teenager when I first discovered Elmore Leonard. Out of Sight had just come out in paperback, and I had scooped it up after reading this was from the guy responsible for Get Shorty.  His books didn’t read like your typical novel. Instead it felt like you were reading something that came alive; his characters simply spoke as though they came off the streets, not the pages of literature.  I loved these books and have been reading them since, and when the news came early this year that Elmore Leonard had passed, it was one of the first times I actually got upset about a “celebrity” passing.  It was the realization there simply would be no more stories to keep me turning the pages at night. Thankfully he left behind a collection of stories that will stand the test of time, and it’s with Life of Crime we get to see that.

A pair of small time crooks, Ordell (Mos Def) and Louis (John Hawkes) have a plan to kidnap a crooked real estate developer’s wife and hold her for a million-dollar ransom.  The plan is just about perfect, and Mickey (Jennifer Anniston) is just about the perfect victim for her kidnappers; the trouble instead comes with the husband, Frank Dawson (Tim Robbins) who has just gone on vacation to the Bahamas where he has his mistress waiting.  To make matters even more complicated for the crooks, Frank has even filed for divorce, so having his wife out of the picture would only make his life easier.

Originally titled The Switch, Life of Crime actually brings back some characters we are already familiar with, at least for those that have seen Jackie Brown.  Life of Crime in fact shows us the younger version of several characters, but most notably Ordell and Louis, who were originally played by Samuel L. Jackson and Robert De Niro.  I have to admit I was a little worried at how Mos Def and John Hawkes would measure up, but the duo nail their parts and also make the characters uniquely their own; after all, some leeway can be given, since Jackie Brown takes place long after the events in Life of Crime.

What works best in this film are the interactions we see between all the characters, whether it’s the dynamic of Mickey working with her kidnappers or how the mistress Melanie (Isla Fisher) deals with the extortionists, the dialog drives every scene.  Sure, there is some violence throughout, but it’s how these characters interact that get us to care as well as keeps us wondering who is going to out-con who.

Staying true to the novel, the film takes place in 1978 Detroit.  Not only does this allow the soundtrack to be filled with some fun funky 70’s themes, but the styles and the cars just work so well for this story.  Writer and director Daniel Schechter sticks to the source material and does solid work at getting together this cast that simply nails the material.  Sadly, though, without the “star power” it seems this little movie won’t get the audience it deserves.  Sure, it has its faults, but Schechter delivers such a charming con-artist film that takes the typical Hollywood cliché and flips it on its side.  This is a world where the bad guys are not so bad and the good guys are not so good. The film walks a fine line between the good and the bad but manages to find a way where everyone involved can win.

Life of Crime is presented in an aspect ratio of 2.39:1.  The 1080p image is arrived at with an AVC MPEG-4 codec at an average of 19 mbps.  Even though the film takes place in Detroit during the winter, there is a lot of warmth in the film’s image.  Whether it’s while we are in the Dawson home or in the Bahamas, there is a sandy beach-like quality to the film’s image.  As the film moves to the outdoors or where they hold Mickey, the warmth is stripped away and it has a colder look.  Though the film maintains a very sharp image, there is not much in the way of shadow definition.  It’s an overall pleasing look but far from perfect.

The DTS-HD Master Audio 5.1 track comes alive with its funky 70’s sound that helps take us back to 1978 Detroit.  This is a dialog-driven film, and the dialog sounds smooth and clear throughout.  In the few action sequences the gunfire pops nicely as the track is nicely mixed with some well-placed sound effects.

Directors Commentary: Here we get a solid commentary with the director who offers plenty of insight into the source material as well as what it took to get the film made.

Deleted Scenes: (10:20) There are a few scenes that have been cut out, but really there is nothing missed here; it’s simply fat that needed to be cut.

Behind The Scenes: (10:06) This first behind-the-scenes feature is more so about how the cast came together for the film, a little underwhelming.

Envisioning The Big Picture: Shooting Crime (9:16) Here we get a little more insight on how the film came together and about the look and style of the film and keeping it in the 70’s.

Hit and Run: Choreographing Mayhem: (6:30) A look at how some of the film’s stunts were accomplished with the use of stuntmen.

As much as I enjoyed the film and seeing characters from the book come to life, for those who are unaware of the characters and the connection to Jackie Brown, some of the novelty the film has won’t matter.  Sure, we have some solid performances, and the story is relatively simple and fun; for most this will amount to nothing more than a casual Netflix view.  Hopefully this film gets people interested in seeking out more work, whether it’s in book form or on film, from Elmore Leonard, but I won’t hold my breath.

Brent Lorentson is a horror writer and film critic based out of Tampa, Florida. With a BA in Digital Film, he co-wrote and co-directed Scavenger Hunt. His short stories have appeared in various horror anthologies. In 2019 his short script Fertile Blood will be a part of the anthology horror film Slumber Party. He is currently working on his first novel A Dark and Secret Place set to be released in late 2019. Favorite Films: Taxi Driver, Fight Club, I Saw the Devil, The Wild Bunch, Dawn of the Dead, A Clockwork Orange, Pulp Fiction, Heathers, The Monster Squad, and High Fidelity.
Impractical Jokers: Season 2 Step Up: All In (Blu-ray)