Posted in: No Huddle by Archive Authors on November 11th, 2014 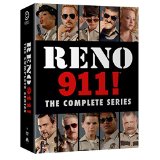 Now that it’s over, Comedy Central has put together the entire six-season run of Reno 911 in one big DVD collection. The show that started out as basically a Cops parody (which is pretty funny on its own trailer-trash merits) had become a holy grail of sorts for the Comedy Channel. While some sketch shows like The Ben Stiller Show and Mr. Show have managed to touch on the Cops parody with their material, the only one that did it regularly was the show that used it for inspiration. The show spanned six seasons and a major motion picture. Reno 911 can be best described as a faux-reality show with a good deal of improvisational comedy performed by some very capable actors and actresses.

The show focused on a group of police officers in the sleepy Nevada town doing what they can to keep law and order. You’ve got Lieutenant Dangle (Thomas Lennon, The State), a bicycle cop who perpetually wears hot pants, Deputy Jones (Cedric Yarbrough, Meet the Fockers), probably the guy who best looks the part of a menacing cop, Deputy Williams (Niecy Nash, Malibu’s Most Wanted), who has no bones about being the only black woman on the force, and Deputy Johnson (Wendi McLendon Covey, Bewitched), the blonde-haired, big-chested female member of the force. Lennon, who helped create the show, also brought a couple of members of his State alumni with him, Kerri Kenney-Silver (who plays Deputy Weigel) and Robert Ben Garant (who plays Deputy Travis).

Much like the show it’s inspired by, Reno 911 contains episodes that are standalone and don’t really focus on any continuing character development, but primarily on isolated events in characters’ lives along with the occasional arrest, of course. Some of the arrests are pretty funny, but they are definitely in the “dark humor” category. You don’t need to look any further than the first episode (when a dog is shot) to know whether you’re going to like it or not. Episodes include incidents from Carrot Top trashing a hotel suite to a Citizens’ Patrol member (great cameo performance by Paul Ruebens) keeping one step ahead of the police on a murder case.

I had caught the show a couple of times, and it basically produced a “meh” feeling. I didn’t get it, I suppose. Sure, there were a few funny gags, but from the little tidbit I caught, I wasn’t very interested. However, as with most shows, you start understanding it more once you sit through a ton of episodes at one time. Now I’m not going to say that I’m hooked. But I can honestly say there is a lot of brilliance to be had. The comedy is smart but doesn’t feel canned. Everybody in the cast has a truly equal part. Sure, you have favorites (Deputy Johnson and Deputy Jones) and can do without others, but they all come together in hilarious fashion. There are times when the humor seems a little forced (that’s more the fault of the premise rather than the cast of characters), but those times are few. It’s good television that doesn’t suffer from big-name actors, and they play off each other rather well.

One note of caution the DVD cover does say Uncensored. Well, the language certainly is; the cast swears like sailors, but it does add to the hilarity. However, the nudity is censored. Now, this can be a good thing (Season Four Episode 10 *shiver*), and this can be a very bad thing (very same season, Episode 9, oh Dep. Johnson and they use black bars, not fuzzies; even in the commentary, the actress complains ). It is false advertising, but we’ll live (I guess).

The DVD has a host of extras to enjoy, and while it won’t make you feel well-rounded about the show, they are very entertaining. You get the first 5 seasons in full frame while the 6th season is in 1.78:1. There are 14 discs in a fat plastic container. Credit these guys for not making the discs overlap. It makes for a rather bulky case but you can get to each disc without having to take out another. I absolutely love this approach better than overlapped discs or cardboard sleeves.