Welcome to the Space Show (Blu-ray) 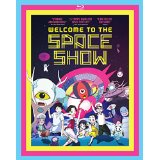 Welcome to the Space Show looks like what would happen if you combined Steven Spielberg’s E.T. — or the openly-Spielbergian Super 8 and Earth to Echo — with the boundless imagination and quirky charms of anime. The result here is intermittently dazzling, but this particular kid-friendly alien adventure is ultimately less than the sum of its parts.

The film immediately grabs your attention with a high-octane action sequence: two bumbling, strange looking creatures are being pursued through a forest by a spastic smaller blur that looks and behaves as if it’s on fire. What’s most intriguing about this opening is that director Koji Masunari makes it impossible to tell whether we should be rooting for the two creatures to get away or for the pursuer to catch them. After the action-packed prologue, Welcome to the Space Show settles into its main story. A group of elementary school kids heads to a summer camp that has a mildly alarming lack of adult supervision.

Natsuki (voice of Tomoyo Kurosawa) has her head in the clouds and dreams of being a superhero. Her younger cousin Amane (Honoka Ikezuki) is feisty and reliable, which means she is often annoyed with Natsuki. (One example: Amane blames Natsuki for their missing class pet.) Kiyoshi (Shotaro Uzawa) is the oldest of the group and its de facto leader, despite a propensity for second guessing himself. Noriko (Tamaki Matsumoto) is the most stylish group member, while Koji (Takuto Yoshinaga) is the most bookish. While looking for their class pet, the kids find a wounded dog named Pochi (Keiji Fujiwara) in the forest. They know his name is Pochi because the “dog” speaks to them and tells them he’s actually an alien.

Pochi was on Earth because our planet is said to contain a mysterious substance known as the Zughaan that is coveted throughout the universe. (Hint: the substance isn’t exactly rare in Japan.) In exchange for saving his life, Pochi offers to take the kids on the adventure of a lifetime. He whisks the kids away to a bustling space colony on the dark side of the moon. Not surprisingly, this is also the point where Welcome to the Space Show really takes off as a visual experience.

The movie was released in 2010 and marked Masunari’s feature film debut after decades of work as a TV anime director. The most impressive thing about Welcome to the Space Show is the inventive character design and the intricate world-building Masunari achieves once the kids reach the space colony. Most of the characters look like a mash-up of two or three different animals (there are hints of tadpoles, hedgehogs, squids, etc). The result is a cast of aliens who could populate a much cuddlier version of “The Island of Dr. Moreau.” The exception, of course, is Pochi, who looks very much like a dog, except for the fact that he has a pair of bushy eyebrows. (A subtle touch that instantly gives him more human facial features.) One of the movie’s best running jokes is Pochi’s outrage at being referred to as a dog.

The film’s title alludes to a wildly popular intergalactic variety show, which appears to be broadcast from a moving spaceship. “The Space Show” host Neppo (Ryohei Nakao) and his comely canine associate Marie (Rei Igarashi) each have nefarious ambitions and a connection to Pochi, but the movie becomes considerably less engaging when it is bogged down by its ponderous plot. In addition to the mysterious Zughaan, there’s talk of a “Pet Star” and a “Dark Trench,” which are more likely to make your eyes glaze over than thrill you.

At 136 minutes, Welcome to the Space Show could definitely use some trimming. At the very least, the film would’ve benefited from a more streamlined finale that didn’t have most of the major characters repeatedly monologuing about their intentions. That being said, the finale is an epic set piece that thrusts one of the kids into “The Space Show” and forces the others to come to the rescue. (The establishing shot of a lighted, outer space parade is particularly breathtaking.)

But even the exciting finale feels slightly overstuffed. As a whole, Welcome to the Space Show is more interesting when the kids are allowed to explore the world, as opposed to being forced to save it.

Welcome to the Space Show is presented in an aspect ratio of 1.85:1. The 1080p image is arrived at with an AVC MPEG-4 codec at an average of 33 mbps. Even if the story had remained earthbound, this would’ve been an incredibly strong visual outing. There are inky black levels with terrific separation in the opening nighttime action sequence, and there are also some lush colors (especially green) when the kids discover a crop circle at their camp. Of course, the real fun starts once the story moves to outer space. I’m not just talking about more overt visual treats, like the way every color of the rainbow is represented when the kids visit the eclectic space colony. Even their trip over the moon’s surface reveals a remarkable amount of texture and detail. The movie is a visual spectacle, and the Blu-ray absolutely lives up to the lofty standard set by Masunari.

You have the option of listening to the DTS-HD Master Audio 5.1 Japanese track or a DTS-HD Master Audio 5.1 English track that comes with a separate set of subtitles. Even though the English dubs on these GKids/Cinedigm Blu-rays are actually quite good — at least in my experience — I tend to watch films in their original language. You’ll want to make sure your system isn’t pumped up to the max — especially if you have neighbors nearby — because that early chase sequence will absolutely make it explode to life. The thunderous, dynamic opening winds up being the sonic highlight of the track, which generally veers a bit too much on the aggressive side. Ambient noises from the rear speakers largely consist of a single sound — crickets; an aircraft taking flight — cranked up a little too high. (Not enough to mess with dialogue clarity, but still.)

The Making of Welcome to the Space Show: (1:25:29) Instead of a standard “Making of”, we get a feature-length episode of a foreign talk show called “The Creator.” (At least according to the subtitles; this is all in Japanese.) Early on, the (overly) enthusiastic hosts announce their intention of delving into the brain of an anime creator. As a result, we get director Koji Masunari talking about his process. He is eventually joined by crew members (producers, an illustrator, a scenic designer) and the young members of his cast. Although the format is a bit jarring, this is an impressive deep dive and appreciation of all the people who work on an anime film. It’s also a detailed breakdown of what each of their jobs entail. Presented in standard definition.

From Storyboard to Film: (7:49) Side-by-side comparisons of the movie’s opening sequence and the first glimpse of the space show. Masunari intentionally works from rougher, less-detailed storyboards to let his collaborators have more input, so the comparison here is more stark. Presented in HD.

The movie looks fantastic, and that’s in no small part due to this strong Blu-ray release. Like the kids in Welcome to the Space Show, you’ll be treated to some amazing sights.

Unfortunately, with the exception of Natsuki and Amane — who share one pretty touching scene right before the final act — the main characters and story are pretty thinly drawn. (No pun intended.) And besides Pochi, Welcome to the Space Show doesn’t quite have personalities that are indelible enough to make this an enduring animated favorite. Still worth a look if you enjoy dazzling hand-drawn animation.