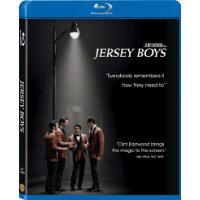 “You sell 100 million records, and see how you handle it.”

If you’ve ever seen an episode of Behind the Music — or followed popular culture at all in the previous century — then you probably know artists tend to not handle that level of success very well. However, the rise and (inevitable) fall of the original Four Seasons lineup is unique for a number reasons. Unfortunately, very few of those reasons are captured in Jersey Boys, Clint Eastwood’s oddly lifeless, workmanlike adaptation of the joyous, wildly popular Broadway musical.

Jersey Boys immediately took Broadway by storm. It was a critical and commercial smash that captured four Tony awards, including the prize for Best Musical. In addition to its multiple national tours, the show has held down a spot on the Great White Way since it opened in 2005. This is all just an elaborate way of telling you that a lot of people have seen and loved this musical, which is why I’m a little surprised it took almost 10 years for the Boys to make their way to the big screen.

The film, like the stage show, chronicles the formation of the Four Seasons: Tommy DeVito, Bob Gaudio, Nick Massi, and lead singer Frankie Castelluccio Valli. Jersey Boys opens in Belleville, New Jersey in 1951, and we learn there are only three ways out of that particular neighborhood: join the Army, join the mob, or become famous. Small-time hoods Tommy (Vincent Piazza) and Nick (Michael Lomenda) take it upon themselves to protect and nurture Frankie (John Lloyd Young), the prodigiously talented teenager with the voice of an angel. Tommy, who manages and performs in his own musical trio, eventually forms a group with Frankie and Nick. The three make little headway until a mutual friend introduces them to talented singer-songwriter Bob Gaudio (Erich Bergen).

The newly-formed Four Seasons sign a record deal with producer Bob Crewe (Mike Doyle), but the path to stardom remains bumpy. Even after they score three #1 hits in 1962, tension among the guys continues to mount. Tommy’s behavior grows even more erratic when he starts to feel he’s losing control of the group (and losing control of Frankie) to Bob. Frankie’s wandering eye destroys his relationship with his wife Mary (Renee Marino) and daughter/aspiring singer Francine (played as a teen by Freya Tingley). Meanwhile, all Nick wants is to start his own band and for Tommy to stop being such a slob.

“Everybody remembers it how they need to.”

The movie is written by Marshall Brickman and Rick Elice, who also penned the Broadway musical’s book. Both feature a different member of the Four Seasons breaking the fourth wall and narrating the band’s story directly to viewers. I’ve never seen Jersey Boys on stage, but I imagine the device works well as a way for the actors to slyly share info with a live audience. On film, the same device feels forced and distracting because movies allow for the sort of visual and storytelling freedom that make this sort of narrative trick unnecessary. On top of that, the group members’ perspectives don’t really contradict each other, so the film also squanders the potential for Rashomon-style fun.

Jersey Boys is a jukebox musical, using the Four Seasons’ popular hits — rather than original compositions— as its score. The focus with a jukebox musical is almost exclusively on the songs, so writers typically end up concocting flimsy stories to fill the gaps between recognizable tunes. The story of the Four Seasons, on the other hand, includes more than enough fascinating characters and events to fill that space between songs.

Unfortunately, it appears as if Eastwood became so enamored with that space between songs he forgot to make an entertaining movie musical. It’s a disappointing turn of events considering Eastwood has a well-documented passion for music. The Four Seasons’ insanely-catchy catalog is deployed in distressingly compact bursts. Remember those three #1 hits from 1962 — “Sherry”, “Big Girls Don’t Cry”, and “Walk Like a Man”? Eastwood stages them back-to-back-to-back in rapid succession. Jersey Boys clocks in at 134 minutes; three of the most popular songs in your movie shouldn’t be crammed into a single 10-minute block.

Even the film’s best number — Valli’s solo rendition of “Can’t Take My Eyes Off You” — is immediately followed by another major hit, “December 1963 (Oh What a Night).” The actors sang live on-set, which is always admirable. However, it produced some unintentionally rough vocals. (Lomenda simply wasn’t able to channel Nick’s well-deep bass.) The bigger problem is that none of the musical sequences in the film are staged or presented with any sort of verve or imagination. In fact, the only time Clint seems to loosen up as a movie musical director is during an end-credit medley that feels totally tacked on.

The film — shot by Tom Stern (Gran Torino, Million Dollar Baby) — has a glossy sheen that clashes with the salty language. (Jersey Boys is rated R, and it’s not for violence or sexual situations.) Eastwood luxuriates in period details, particularly the costumes and cars of the era, as well as the idea that people in New Jersey hung framed pictures of Frank Sinatra in their homes the same way most people hang pictures of Jesus.

Some of the wiseguy banter is amusing, but I wish the script had spent more time on the Four Seasons’ record-breaking impact — they were Beatles-level successful right before The Beatles — and the process that led to such indelible music. Apparently, Gaudio really did write “Sherry” in 15 minutes, but we don’t get any insight into the actual creation of that (or any other) smash song. (The most we get is an eye-roll worthy origin for “Big Girls Don’t Cry” and Tommy cluelessly grumbling that he doesn’t understand why the group is singing about “walking like a man.”)

The only biggest reason for the Four Seasons’ success, we’re told, is Valli’s otherworldly voice. Young, who won a Tony for playing Valli on Broadway, still has the baby face and the vocal chops to pull off the role. (The baby face hurts him — and the other actors — when he has to don some unfortunate old-age makeup.) Young is better when Frankie is in the studio or on stage than when he has to re-enact Valli’s domestic drama. The actor shares a nice spark with Marino during their first scenes together, but the script eventually has Mary devolve into a poor man’s Karen Hill. In fact, Jersey Boys spends too much time on sub-Goodfellas/sub-Sopranos braggadocio.

Even a talented performer like Piazza spends more time doing pale tough-guy variations of James Caan and Joe Pesci characters than he does showing off his musical chops as Tommy; at least he’s got a better voice than Pesci. (I feel I should mention — since the movie didn’t — that the “Joey” who introduced Bob to the rest of the guys in the movie was Joe Pesci in real life; also, “Tommy DeVito” is the name of the iconic character Pesci played in Goodfellas.)

Christopher Walken, easily the most recognizable name in the cast, pops up as friendly neighborhood gangster Gyp DeCarlo. (I take it back; Walken is the second-most recognizable name here if you count a sly cameo by the director.) Gyp isn’t crucial to the story, but Walken effortlessly embodies the menace Piazza and others are desperately trying to achieve. There was so much bluster going around, Doyle’s effeminate performance as Crewe was actually a nice antidote.

Jersey Boys is presented in its original aspect ratio of 2.40:1. The 1080p image is arrived at with an AVC MPEG-4 codec at an average 25-30 mbps. The high-definition image presentation isn’t quite what you might expect if you hadn’t seen the film at the box office. Colors and focus are both quite soft throughout. This represents a period feel that is actually pretty common in an Eastwood-directed film. When the camera moves in, you get the sharp detail that pays off the high-definition experience. Black levels are average again a victim of the soft image. Understand that this is exactly the way the film was intentionally presented and is flawless in that context.

The DTS-HD Master Audio 5.1 comes alive in the musical presentations. It’s a bit of a letdown that these numbers are pretty much limited to performances and montage scenes. Dialog is fine and presented perfectly in space, but it’s the vocal performances that make this presentation dynamic. John Lloyd Young has a terrific voice and does a wonderful job reproducing Valli’s iconic falsetto style. Surrounds aren’t terribly aggressive, and they really don’t need to be. This is a front-facing film all the way. Anything else would have only proven to be a distraction.

From Broadway To Big Screen: (22:55) The cast and crew offer up plenty of sound bites on the film. They talk about Valli’s music and how they feel about the familiar songs. It’s always a joy to see Eastwood directing even if this was perhaps not the best suited material for his talents. There’s plenty of behind-the-scenes footage. If the film is about the stories, these are the stories behind those stories.

Too Good To Be True: (4:51) While many of the actors also starred in various productions of the stage version this feature focuses on Donnie Kehr who played Norm Waxman in the film but played both Waxman and Gyp in the stage production.

Oh What A Night To Remember: (5:05) A look at the finale crowd scene, unfortunately my least favorite scene.

So I suppose for Jersey Boys, the question becomes “Who Loves You”?  I suspect fans will flock to this film. I’m just not sure they’re going to find the toe-tapping, finger-snapping musical spectacle they might expect.