Posted in: No Huddle by Jeremy Butler on November 17th, 2014 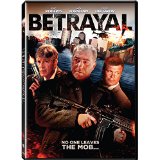 Isn’t it always the case that the people closest to us usually bring us the biggest trouble, or perhaps that is a pessimistic view. However, I must admit it’s likely a view that the lead character of Betrayal could agree with as he finds himself drawn into a web of deception that threatens to destroy the lives of not only his family but his own as well. Vaz is a gangster. Based on what I saw there is no way around characterizing him that way; however, he does seem to have a few redeeming qualities such as the love he has for his family, specifically his elder son. He also appears to have inspired as well as employed a lot of loyalty to his number two, as displayed by his number two’s willingness to execute anyone on his order as well as lay down his life for his boss.

The story does it best to be interesting; unfortunately, it is a tale that has been told a numerous times over and in the case of this time. The story fails to bring anything new and exciting to the table. A majority of the film is spent with Vaz attempting to clean up the mess made by his oldest son in an attempt to avoid a war that ultimately started by another group looking to X out Vaz for the most basic of reasons: money, greed, power (the usual trinity of destruction). So the audience spends their following along with characters who present little to no intrigue. Perhaps more backstory on what brought about Vaz’s rivals’ decision to strike, or perhaps more detail into Vaz’s organization, would help improve the overall status of the film.

Though there are a few familiar faces, they add very little to the success of the film. Eric Roberts gave a compelling performance as a gangster in The Dark Knight, which is ironic considering it was a small role with fewer appearances then he has here. As a whole, there wasn’t a lot of chemistry among the cast, somewhat due to acting, but mostly due to interactions between characters being limited by the go-go-go circumstances the film illustrated. We moved from place to place, never given the opportunity to become comfortable and familiarize ourselves with the cast. The film could have benefited from less moving around and more character-driven dialog.

Jeremy Butler is a film school graduate of the International Academy of Design and Technology. He is been writing for Upcomingdiscs since 2012; however, movies have played a big part of his life for much longer. Favorite genres include horror, science fiction/fantasy, and comedy. Favorite movies are V for Vendetta, Boondocks Saints, Kiss Kiss Bang Bang, and The Godfather.
Hot in Cleveland: Season Five Patema Inverted (Blu-ray)