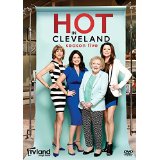 I had never seen a single episode of Hot in Cleveland before I sat down to review this season 5 DVD set. So why did it feel like I’d been watching this show my entire life? Turns out, it’s entirely by design. On the surface, it doesn’t seem like I’m the target audience for Hot in Cleveland: I’m under 50 years old, and I’m a man. But if you look beyond the plastic surgery jokes and geriatric humor, you’ll find a show that aggressively channels — and ultimately appeals to fans of — many of the classic, multi-camera sitcoms of the past. In other words, Hot in Cleveland feels like you’re watching re-runs of a show you’ve already seen…and still enjoy plenty.

“I still can’t believe that I actually live in Cleveland. But in L.A., we were feeling devalued and disposable.”

In case you’ve never seen Hot in Cleveland, the set-up is simple. Three middle-aged women from Los Angeles are on a flight headed to Paris before their plane is forced to make an emergency landing in Cleveland. Melanie Moretti (Valerie Bertinelli, One Day at a Time) is an optimistic writer; Joy Scroggs (Jane Leeves, Frasier) is an English beautician who, erm, has enjoyed the company of many men; and Victoria Chase (Wendie Malick, Just Shoot Me) is a self-centered soap opera star. The women are considered over the hill by L.A. standards. However, they quickly realize that they’re still considered hot in Cleveland. As a result, they decide to stick around and lease a home together. Unfortunately for them — but very fortunately for us at home — the house comes with sassy, judgmental caretaker Elka Ostrovsky (Betty White, The Golden Girls).

Season 5 begins on a predictably loony note. Melanie is dealing with a surprise pregnancy that has an unexpected resolution. Joy is bracing for the impending arrival of Simon (guest star Craig Ferguson), the man who fathered the son she gave up for adoption when she was a teen. (The trio has a rocky family reunion in Ep. 3/“Dr. Who?”) Victoria is missing her fugitive tax defrauder of husband and preparing to embark on an Oscar campaign for her performance in Woody Allen’s (fictional) Cleveland Rhapsody. Meanwhile, Elka…probably just needs a vodka refill. This is a good place to mention that the season 5 premiere was a live episode that featured guest appearances from Cedric the Entertainer, Ken Jeong, recurring guest star Dave Foley (as eccentric private detective Bob), and a fourth wall-breaking Alex Trebek(!)

That season premiere turned out to be the tip of the guest star iceberg. Practically every episode features a familiar face from TV’s past (Chevy Chase, Kirstie Alley, Marion Ross, Jason Priestley, Luke Perry, Frasier‘s John Mahoney) or present (New Girl‘s Max Greenfield, Modern Family‘s Sarah Hyland, Glee‘s Chris Colfer and Jennifer Love Hewitt as two of Victoria’s children: Tony and Emmy). What might otherwise be considered desperate stunt-casting on a different show is instead a crucial part of Hot in Cleveland‘s DNA.

The show was TV Land’s first original scripted program and easily its biggest hit so far. Before that, the network pretty much consisted of comfort food reruns. Hot in Cleveland doesn’t stray very far from the formula. As grateful as we TV fans are to see some of our long-lost favorites pop up, I also sense an uncommon enthusiasm from the performers themselves. To be frank, many of the show’s high-profile guest stars are well past the days when they were carrying their own shows. But rather than seeming like they’re slumming here, there’s an appealing sense of play to practically every guest appearance. (Like when soap star Susan Lucci, as herself, makes one of her periodic pit stops as Victoria’s nemesis.)

That sense of looseness is missing from a lot of modern sitcoms that strain to be edgy or hip. (Right about now, Hot in Cleveland would shamelessly throw in a joke about Elka breaking a hip.) It also manifests itself through the easy chemistry among the four leads. To be fair, that looseness also means the show’s silliness often veers into eye-rolling territory. Thankfully, a lot of that is offset by its expert cast. Betty White — who was only supposed to be a guest star in the Hot in Cleveland pilot — is obviously the show’s scene-stealer. Since Elka wasn’t part of the original plan, the show’s writers can add whatever insane qualities strike their fancy. So far, she’s a Nazi-dodging drunk whose “late” husband had mob connections. In season 5, Elka reveals that she once slept with Frank Sinatra and decides to run for city council, which leads to some House of Cards-style asides. (See? Hot in Cleveland is very willing to reference current shows as well.)

Since White (deservedly) gets so much attention, the other leads’ work is a little underrated. Bertinelli is an invaluably affable straight (wo)man, and Malick has her charmingly oblivious vain routine down to a science by now. Leeves, on the other hand, feels miscast as the allegedly slutty Joy; the actress could be hitting some bawdy notes, but ultimately comes off as too sweet. Among the guest stars and recurring players, my favorites included The Mary Tyler Moore Show‘s Georgia Engel as Elka’s daffy friend Mamie Sue (she pretty much swipes the live premiere) and Wonder Years actor Dan Lauria as a filmmaker who makes Victoria realize she may not be that shallow after all.

In addition to Elka’s city council run and Victoria’s Oscar campaign — both culminate in Ep. 22/ “Win Win” (Spoiler alert, I guess?) — the ladies adopt an adorable pup they name George Clooney. There’s also a completely bonkers animated episode that features homages to Willy Wonka and the Chocolate Factory, The Wizard of Oz, and…The Walking Dead(!?) Oh, and Steven Tyler also guest stars as himself and offers to grant the ladies three wishes because why the heck not? The season ends with a Bachelor-style cliffhanger — naturally Bachelor host Chris Harrison guest stars as himself — in which Joy has to decide between marriage proposals posed by Simon, Bob, and Mitch (Tim Daly, Wings).

Hot in Cleveland: Season 5 features all 24 episodes on three discs. There is no bonus material. Season 6 is already airing on TV Land, and I suggest you tune in. Reviewing this DVD set taught me the same lesson the ladies on the show learned a long time ago: it’s never too late to discover the fun you can have in Cleveland.

Contest: Queens of the Ring From Image Entertainment Betrayal