Posted in: Disc Reviews by Brent Lorentson on November 17th, 2014 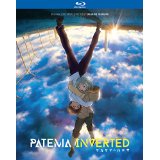 I’m not the biggest fan of Japanese animation. I don’t think it’s awful or anything, but animation is one of those things where I’m just picky about what I like.  Though I can say I am a big fan of Hayao Miyazaki (Spirited Away and Princess Mononoke) and most of his work.  I think this is worth mentioning, because though I may not be as well-versed in this genre, I’d like to feel I still go into it with an open mind, and I’m always excited to find a title that excites me that I never saw coming.  And that it precisely what Patema Inverted did.

Imagine if one day the laws of gravity were broken, and during this time friends and family all around seemed to be randomly sucked towards the sky, and you were helpless to do anything about it.  Those who would be lucky to survive and keep their feet planted firmly on ground would have to go on living in this world that had fundamentally changed overnight.  But what about those who have been floating up into the ether, what about these lost souls and their fate?  This is the fundamental springboard by which Patema Inverted takes us to a world where those who survive live in separate “realities” where some seek to live deep beneath the earth to survive, while others have created their own world in the sky that has evolved as well.

Patema (original voice actor Yukiyo Fujii) is a young girl and filled with the sense of adventure; she’s the kind of character we are used to seeing time and time again in these adventurous tales, but nevertheless she is a character we find irresistible to root for.  One day she of course ventures into an area where she doesn’t belong, and this results in her falling through an endless void, that is until the world seems to flip upside down and she emerges into another world.  In this world the “sky” continues to be the ground, and it’s in this world she meets Age (original voice actor Nobuhiko Okamoto).

What develops between Patema and Age is to be expected; after all, this is simply a tale of girl meets boy in a unique but not-so-different world.  Unfortunately in this world Patema and her kind are looked upon with disdain, and called “Inverts” by the government officials.  It’s in this world where they believe all the sinners were sucked up into the sky and that only bad could come from her or any “inverts” being around.

While the film does tend to tread in areas we’ve seen before in other science fiction tales, the visuals and storytelling in this animated feature do allow for this to feel fresh but unfortunately not groundbreaking.  I wish the animators got the chance to play more with this notion that gravity no longer plays by the same rules, when instead we only get generic visuals like Age holding onto Patema while she floats upside down.  There is a fun chase at the midpoint of the film, but still, considering this is an animated film where there simply are no restrictions other than what the imagination can create, it’s sad we didn’t get at least a little more out of this film.

Patema Inverted is presented in an aspect ratio of 1.78:1.  The 1080p image is arrived at with an AVC MPEG-4 codec at an average of 32mbps.  This is a beautifully animated world that is filled with plenty of detail. The one complaint I have, and this is more of a preference than a jab at the animation: I’m just not a fan of the use of a filter to give the image an unnatural haze.  As for the scenes below the surface, the image appears much sharper, and I found this to actually be the world I actually enjoyed viewing more since it was filled with many unique characteristics to help support people living beneath the ground.

The DTS-Master Audio 5.0 sound has a default to the English language, though you do have the option to choose the original Japanese language track with English subtitles.  Whether you are watching the dubbed or original language track, the dialog is clear throughout, and for those reading the subtitles, they are white and large enough to see without any struggle and easy to keep up with the images on the screen.  We get a nice mix that also has plenty of solid sound effects work throughout.

Audio Commentary:  There is a commentary track with the producer as well as some of the cast members, but you should be warned that they are speaking their natural Japanese language, though the track is accompanied with subtitles for you to follow along.

Interview with the Director Yasuhiro Yoshiura: (5:18)  This is a brief interview with the director which looks to be shot at one of the early festival screenings of the film.  It’s not very informative, but he does offer insight into how the process of directing an animated film works.

Interviews with Original Voice Cast: (6:00) An interview with the original voice performers of Patema and Age.  The pair seem like sweet and charming individuals who seemed to have a good time working on the film.

At the Premiere with the Director and Cast: (15:04)  At the Tokyo Film Festival where they are getting to show their film for the first time.  There is a sweet moment where Yukiyo Fujii thanks the director for the role; it’s sad we don’t get to see more performers being so gracious anymore.

While the film may not be perfect, this is a fun little sci-fi adventure that offers up a little bit of everything from action to romance.  With the English language track, this is a DVD worth showing the young ones when you simply have gotten tired of them watching Frozen and How To Train Your Dragon for the hundredth time.

Brent Lorentson is a horror writer and film critic based out of Tampa, Florida. With a BA in Digital Film, he co-wrote and co-directed Scavenger Hunt. His short stories have appeared in various horror anthologies. In 2019 his short script Fertile Blood will be a part of the anthology horror film Slumber Party. He is currently working on his first novel A Dark and Secret Place set to be released in late 2019. Favorite Films: Taxi Driver, Fight Club, I Saw the Devil, The Wild Bunch, Dawn of the Dead, A Clockwork Orange, Pulp Fiction, Heathers, The Monster Squad, and High Fidelity.
Betrayal Holiday Gift Guide: True Blood: The Complete Series (Blu-ray)