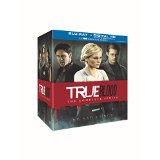 As we get closer to holiday shopping time, Upcomingdiscs will be here to help you find something for that home theater fanatic on your shopping list. Keep checking back to see more recommendations for your holiday shopping. These gift guides ARE NOT paid advertisements. We take no money to publish them.

With the seventh and final season of True Blood in the books, it’s time for HBO to give you the ultimate wrap-up party. That’s exactly what you get with the True Blood: The Complete Series on Blue-ray. It’s a box filled with lots of blood, sex, and all sorts of things that make a prime time cable soap opera keep its hardcore audience. Yep, you heard me right. True Blood (if you haven’t figured it out already) is a glorified soap opera. It has more twists and turns than General Hospital and saucier romances than The Bold and the Beautiful, in a deliciously perverted way. Seriously, nothing is taboo in Bon Temps, Louisiana or any other location in this fantasy world.

After all, this show is on HBO, and if you have seen Deadwood or the Sopranos, you can guess that this show doesn’t pull any punches. The series has the benefit that it can use a ton of material from the book series and uses some or all of it. Most viewers by now understand that it is a loose interpretation, but that doesn’t mean they don’t enjoy it all the same. This allows the show some freedom but a great deal of depth at the same time. It certainly succeeds in this venture.

But much like a soap opera, it does suffer from trying to juggle too many stories at once. Often, a viewer might find themselves lost if they don’t watch each and every episode. In this review, I might present two or three stories for a main focus, but there are easily half a dozen little arches and minor plots that I could spend chapters on. The fact that I wrote this review and took almost triple the space I normally do should give you a clue on how much is going on in True Blood at any given time.

I am not the biggest Sookie fan at all. My favorites are Sam, Jessica, and Lafayette. The great thing is that even if Sookie’s  attempts at a Bill and Eric sandwich (with her in the middle) are a failure, I can at least enjoy it to see what Sam or Lafayette are up to. It is that dynamic that kept fans coming back episode after episode. Diversion is essential when not everybody cozies up to the main characters.

A big negative I find to the series in general is their consistent need to place a moment of levity or hokiness at the one moment where they should be most serious. I love comedy, and I love the odd sort of humor that can be present in this show. But timing is everything, and sometimes in the middle of a very important episode, we get fallout that is often funny on purpose. It seems like the most life-or-death situations will do their best to get that one true comedic moment. Most fans are used to it, but it still seems a bit jarring at key moments. The show also moved far afield of its focus as the seasons wore on. Before long we had too many kinds of creatures and a mythology that went toward the silly more and more often.

Now that it’s over, I look forward to watching this collection as a whole. Shorter time between episodes and seasons might go a long way to tying all of this together in a more coherent fashion, at least that’s my hope.

The Blu-ray package is top-notch with above average video, great sound and a ton of extras which will appeal to many hardcore fans.  This is an easy recommendation, but most fans do not need me to tell you that. The show knows how to keep its fans and even introduce a few new ones too. Enjoy.

Gino Sassani is a member of the Southeastern Film Critic's Association (SEFCA). He is a film and television critic based in Tampa, Florida. He's also the Senior Editor here at Upcomingdiscs. Gino started reviewing films in the early 1990's as a segment of his local television show Focus. He's an award-winning recording artist for Omega Records. Gino is currently working on his 8th album Merchants & Mercenaries. Gino took over Upcomingdiscs Dec 1, 2008. He works out of a home theater he calls The Reel World. Favorite films: The Godfather, The Godfather Part II, The Body Snatcher (Val Lewton film with Karloff and Lugosi, not the pod people film), Unforgiven, Gladiator, The Lion King, Jaws, Son Of Frankenstein, The Good, The Bad And The Ugly, and Monsters, Inc.
Patema Inverted (Blu-ray) The Dog (Blu-ray)