Posted in: Disc Reviews by Gino Sassani on November 18th, 2014 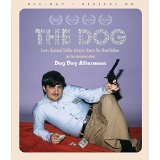 You get the idea. These are the words of one John Wojtowicz, better known as The Dog. On August 22, 1972 he attempted to rob a Chase Manhattan bank in order to finance his male lover’s sex change operation so that he could become a woman. The heist was about as amateur as the come and went horribly wrong from the start. In a matter of minutes the bank was surrounded by a swarm of police units and a growing mob of bystanders. In the hours that followed, The Dog interacted with the crowd, gave a radio interview, and managed to whip the crowd into a frenzy by throwing thousands of the bank’s dollars out of the front door. If this all sounds familiar to you, it should. While you may not have heard of these exploits directly, you surely saw the movie Dog Day Afternoon. Al Pacino played John Wojtowicz, and now you know where he got the nickname The Dog.

This is a documentary on The Dog. It’s not a behind-the-scenes look at the film. In fact, no one connected with the movie except for the film’s screenwriter appears in this documentary, and he only appears in the final minutes. The documentary is one of those labors of love that took filmmakers Allison Berg and Frank Keraudren more than 10 years to make. They privately financed the film, which took them on a journey with The Dog himself that changed their lives forever.

Make no mistake here. While Berg and Keraudren might have made the film, Wojtowicz was always in control. The only choice they had was to allow him to drive the car and reap what they could from the results. This is not your standard talking-heads documentary. The Dog loves attention and constantly mugs for the camera, often calling “cut” himself. This is a man who comes alive when people are watching him, and it’s easy to see how he managed to hold off police and work a neighborhood crowd while holding hostages in a bank for nearly 14 hours. He loves a captive audience, to be sure. He’s also an unreliable narrator. The filmmakers readily admit that he was prone to exaggeration and downright lies. That didn’t appear to surprise them at all. What did shock them, and will shock you, is how many outrageous things he claims that check out.

Then there’s his mother, Terry. The apple didn’t fall far from that tree. While she’s not nearly as flamboyant and doesn’t quite revel in the attention, she’s quite the storyteller herself. She’s obviously had a hard life. She had one son who was mentally handicapped taken away from her as a child. She describes that emotional moment with vivid recollection. The experience moved her closer to John, and the two share a very unique relationship. They are closer than most sons and mothers. She’s amazingly accepting of John even though she’s clearly against many of the choices he’s made. It’s this dynamic of mother and son that makes this material as compelling as it is. They are both charismatic as hell, and like a train wreck, you simply can’t turn away. You’ll be hooked in the first two minutes of the documentary.

The film is basically told in three parts. The first part is rather unexpected. It turns out that The Dog was an active part of the gay rights movement of the late 1960’s and early 1970’s. He wasn’t so much interested in the social reform as he was in easy sex. He’s a self-admitted sex addict, male or female. It dominates his conversation and interaction with anyone around him. John can’t be in a room for five minutes without hitting on someone. Again, it doesn’t matter male or female. He admits to joining the entertainment committee so he’d have first crack at anyone who came to events or meetings as a greeter. Footage here shows him at several demonstrations and at a stunt wedding conducted to bring attention to the idea of gay marriage. Sounds like a contemporary event, but this was in the 1960’s. That’s where he married Aaron, later Liz, whose sex-change operation he ended up robbing the bank for. Of course, he was already legally married to Carmen, a woman who knew about his sexual exploits with men. Carmen is interviewed in the film and is remarkably calm about her remembrances. Here we also learn that The Dog’s first encounter with a man was after he was drafted into the Army during the Vietnam War. That period clearly set in motion the events that would shape the remainder of his days.

The second part of the film deals with more familiar territory for fans of Dog Day Afternoon. The Dog ended up with about $100,000 for the rights to his story, much of which he claims to have donated to Aaron/Liz’s operation. We hear from him/her, but only through archive interview material. She died years ago. Her relationship with The Dog became hostile toward the end, and we get to see that evolution play out in television interview shows they did together.

The actual bank robbery takes little of this film’s time. Berg and Keraudren decided that we saw most of that in the movie. What surprises me here is how accurately Dog Day Afternoon portrayed the events of that day. Photos and footage of the actual event from news coverage shows remarkably eerie images that are at times almost exactly like that of the movie. Pacino looks very much like the younger John and just nailed his movements, mannerisms and speech patterns. The most notable departures from the real bank heist attempt are Pacino’s chants of “Attica” and waving the white flag.

The third segment deals with the aftermath of the robbery and The Dog’s final days. He spent about seven years in prison. He found a new “wife” in prison in a jailhouse lawyer who had his 20-year sentence reduced. Once outside, they continued the relationship for many years. The Dog took full advantage of his celebrity and lived off the income he could derive from it. This was before the Son of Sam laws that no longer allow one to profit from a criminal act. He would pose for photographs and sign money for anyone who would pony up a few bucks for the privilege.

The Dog died in 2006. From there the filmmakers used their tremendous amount of footage of Terry and John to find other participants to fill out the story. From there they had a seemingly impossible task of editing a film from all of this material. The end result would start making the festival circuits in 2013. It’s a rather compelling film that tells an unbelievable story. Really, you couldn’t make this stuff up.

The Dog is presented in its original aspect ratio of 2.35:1. The 1080p image is arrived at with an AVC MPEG-4 codec at an average 25 mbps. Look. A lot of this footage is pretty bad. It’s the best that could be found, and it’s absolutely essential to telling the story. Even the more contemporary interview footage is done on the fly and won’t win any awards for its high-definition presentation. With that said, it’s important that the transfer be the best it can be in order to make it at all watchable. That we do get from this transfer. You can enjoy it with the understanding that you’re getting exactly what was provided to anyone who saw it screened at a festival.

The DTS-HD Master Audio 5.1 is really just dialog. Some of it is recorded in locations that make good audio impossible. It’s authentic, and you can certainly hear what these people have to say.

There’s an Audio Commentary with Berg and Keraudren. They are candid about their experiences with The Dog, and it’s an interesting story in itself. They spent a ton of time with him and were tested by his demands and flamboyant nature. They obviously fell in love with his charm but were constantly frustrated by him.

It’s hard to make a documentary about this man work. He’s not exactly a likable guy. He’s a criminal who is totally unapologetic for his crimes. There’s no remorse here at all. The film does, I think by necessity, gloss over the fact that his partner Sal was killed in the robbery attempt. That alone makes his 7-year prison stint somewhat incredible. This film doesn’t make him any more likable. It does bring out his charisma, however. It’s easy to see why so many people have been drawn to him over the years and why so many have been willing to give him a pass. The filmmakers do a great job of staying out of the way and letting The Dog speak for himself. This was certainly an experience for me, and I intend to watch Dog Day Afternoon again soon to see how it’s affected that experience. The Dog is an experience I recommend you try. “Am I rattling too much?”

Gino Sassani is a member of the Southeastern Film Critic's Association (SEFCA). He is a film and television critic based in Tampa, Florida. He's also the Senior Editor here at Upcomingdiscs. Gino started reviewing films in the early 1990's as a segment of his local television show Focus. He's an award-winning recording artist for Omega Records. Gino is currently working on his 8th album Merchants & Mercenaries. Gino took over Upcomingdiscs Dec 1, 2008. He works out of a home theater he calls The Reel World. Favorite films: The Godfather, The Godfather Part II, The Body Snatcher (Val Lewton film with Karloff and Lugosi, not the pod people film), Unforgiven, Gladiator, The Lion King, Jaws, Son Of Frankenstein, The Good, The Bad And The Ugly, and Monsters, Inc.
Holiday Gift Guide: True Blood: The Complete Series (Blu-ray) Housebound (Blu-ray)