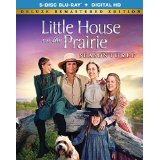 It’s funny how some actors mean different things to different people. It often depends on your age and interests. Michael Landon is one such actor. I was a horror movie fan who watched late-night creature features with my dad. To me Landon was the titular character from I Was A Teenage Werewolf. To my Dad and his generation, Landon was Little Joe from Bonanza. To continue the comparison, Little Joe’s pop was always Commander Adama, with no offense intended toward Edward James Olmos. But there is another generation that doesn’t know werewolves from cowboys, and to them Michael Landon will always be the warm father Charles Ingalls from Little House On The Prairie.

From 1974 until 1983 Little House On The Prairie told the story of the Ingalls family. The series was based on the book written by Laura Ingalls Wilder, who is one of Charles’ daughters and is played by Melissa Gilbert in the series. It had a very Waltons feel for family life in a bygone age. For the Ingalls family, it was the mid-1800’s, and they were a true pioneer family. The show’s focus was on the family, but the entire little town became a character on the show, as well. It was populated by many recurring characters who combined to give the show that rural charm found in shows like The Waltons or The Andy Griffith Show.

If you have someone on your shopping list who thinks of Michael Landon as Charles Ingalls, then Lionsgate has something they are going to love. For the first time this show is starting to arrive in high definition on Blu-ray. That means you get to see this wonderful scenery like never before. You can pick up the first three seasons right now and make someone very happy indeed.

Family entertainment as a genre appears to have all but vanished from our culture. There isn’t a lot you can share with the whole family any more. From sitcoms to drama, it’s all about shock, sex or foul language. If someone on your shopping list agrees with that statement, you need to pick up the first three seasons of Little House On The Prairie. While the show depicts an era long gone by the show itself represents another era long gone from our television landscapes. It’s the kind of gift they will enjoy for hours at a time. Don’t be surprised if they ask you to join them.

Gino Sassani is a member of the Southeastern Film Critic's Association (SEFCA). He is a film and television critic based in Tampa, Florida. He's also the Senior Editor here at Upcomingdiscs. Gino started reviewing films in the early 1990's as a segment of his local television show Focus. He's an award-winning recording artist for Omega Records. Gino is currently working on his 8th album Merchants & Mercenaries. Gino took over Upcomingdiscs Dec 1, 2008. He works out of a home theater he calls The Reel World. Favorite films: The Godfather, The Godfather Part II, The Body Snatcher (Val Lewton film with Karloff and Lugosi, not the pod people film), Unforgiven, Gladiator, The Lion King, Jaws, Son Of Frankenstein, The Good, The Bad And The Ugly, and Monsters, Inc.
A Royal Christmas Holiday Gift Guide: Spotlight: The Merv Griffin Show (1962-1986)