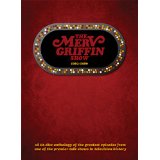 Johnny Carson might have been king of the late-night airwaves, but it was Merv Griffin who held court during the day. From 1962 until 1986 Merv Griffin brought you the most important, entertaining and fascinating personalities to your living rooms. He was also quite the producer. Here’s the question:  He created two of the longest-lasting game shows in television history. Who was Merv Griffin? That’s correct. He created both Wheel Of Fortune and Jeopardy.  But it will be The Merv Griffin Show that he’ll he’s most remembered for.

When I say that Merv made history with his show, I mean more than entertainment history. With the likes of Martin Luther King, Jr., Merv was ahead of his time. This is a serious collection that you’re bound to make a hit with this holiday season.

Gino Sassani is a member of the Southeastern Film Critic's Association (SEFCA). He is a film and television critic based in Tampa, Florida. He's also the Senior Editor here at Upcomingdiscs. Gino started reviewing films in the early 1990's as a segment of his local television show Focus. He's an award-winning recording artist for Omega Records. Gino is currently working on his 8th album Merchants & Mercenaries. Gino took over Upcomingdiscs Dec 1, 2008. He works out of a home theater he calls The Reel World. Favorite films: The Godfather, The Godfather Part II, The Body Snatcher (Val Lewton film with Karloff and Lugosi, not the pod people film), Unforgiven, Gladiator, The Lion King, Jaws, Son Of Frankenstein, The Good, The Bad And The Ugly, and Monsters, Inc.
Holiday Gift Guide Spotlight: Little House on the Prairie Signed Sealed Delivered Christmas