Posted in: No Huddle by Jeremy Butler on December 8th, 2014 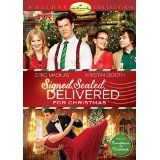 I don’t say this often, but I’m always happy when I get an opportunity to say it: this movie took me by surprise. I not usually one for the holiday film; don’t get me wrong, I’m no Grinch; however, I have found that magic of Christmas tends to wear off when the illusion of Santa is destroyed. (To all those who are still believers I recommend you stop reading now.) That being said, I have no shame in admitting that in case of Signed, Sealed, and Delivered, I felt the magic once again. Don’t call me a believer again; however, let’s just say it made me want to believe again.

Signed, Sealed, and Delivered as it turns out is actually a full-on Hallmark television series following the everyday lives of characters who work in the  dead letter office of the United States Postal Service. Led by Oliver O’Toole (Eric Mabius), this group that includes Shane McInerney (Kristin Booth), Rita Haywith (Crystal Lowe), and Norman Dorman (Geof Gustafson), works overtime ensuring that letters make it to the intended party, believing in the significance that each piece of parcel can bring into the lives of the intended. This time around, it’s Christmas, and their final letter has a very challenging recipient: GOD.

Investigating deeper and aided by a mysterious troubleshooter (Rob Estes) who shows up, the team finds out that the letter belongs to a girl whose mother is in the hospital suffering complications from her pregnancy with the family’s new addition. The little girl hoped to act in a local Silent Night play, but given the state of her mother it does not seem possible. The team decides to intervene and do everything they can to fulfil the girl’s wish. However, Shane seems reluctant to help, as memories of her past seem to be brought back to the surface during this time of year.

Well, as previously stated, I was taken by surprise with this one. Given that it’s Hallmark, I expected your basic cheesiness and granted that this is present in the film, the overall story manages to sidestep a majority of it and provoke genuine emotion. The cast is tremendous. Balancing quirkiness that I imagine you would find in a dead letter section of the post office, they are also very layered, showing real depth, which is shown in aspect where they discuss their past. When it comes to Norman’s character it’s all about feeling unwanted stemming from growing up in the foster care system. Oliver keeps the group focused, but it is also evident that his focus is a distraction from pain he still feels from his failed marriage, and the most heartbreaking comes from Shane, who is the story’s Grinch given her abandonment issue.

The film manages to allow solo story arcs as well as an ensemble arc for the overall story, which is impressive given that execution is a difficult feat. Again, the most compelling arc being the one involving the character Shane, as it deals the heartache that so many deal with every day, therefore making it most identifiable. However, the story could not have soared without Kristin Booth’s acting behind it. There was softness to her approach, vulnerability in when she described the heartache she endured as a young child; you can practically see her inner child as she describes.

Finally, the main thing impressed me about Signed, Sealed, and Delivered is something that in my opinion is always the making or breaking point for any project: chemistry. The relationships between Oliver and Shane are the main selling point. However, it is the predictable relationship;, past experience instantly tells you how their story will go. It is the relationship between Rita and Norman that intrigues me. They are quite possibly two of the most quirky characters I have ever encountered; however, it’s an enduring quirkiness that I couldn’t help but find myself rooting for. Chemistry is key for any series and film; given the chemistry that exists between these actors, it’s no wonder that they made it a television series.

Jeremy Butler is a film school graduate of the International Academy of Design and Technology. He is been writing for Upcomingdiscs since 2012; however, movies have played a big part of his life for much longer. Favorite genres include horror, science fiction/fantasy, and comedy. Favorite movies are V for Vendetta, Boondocks Saints, Kiss Kiss Bang Bang, and The Godfather.
Holiday Gift Guide: Spotlight: The Merv Griffin Show (1962-1986) Holiday Gift Guide Spotlight: The Wonder Years: The Complete Series Set