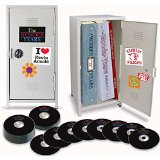 “1968, I was twelve years old. A lot happened that year. Dennis McLain won 31 games, The Mod Squad hit the air, and I graduated from Hillcrest Elementary and entered junior high school…but we’ll get to that. There’s no pretty way to put this: I grew up in the suburbs. I guess most people think of the suburb as a place with all the disadvantages of the city, and none of the advantages of the country, and vice versa. But, in a way, those really were the wonder years for us there in the suburbs. It was kind of a golden age for kids.”

The show takes place in Anywhere, USA. The pilot begins in 1968 and is told from the point of view of a contemporary adult looking back on those early years of his life. Anyone who is a fan of A Christmas Story will appreciate the narrative style of The Wonder Years. While it is mysteriously never mentioned in the tens of hours of extra features, there’s no question that A Christmas Story and the works of Jean Shepherd were a huge influence on the voice and style of the series. Here narrator Daniel Stern offers the same kind of storytelling, even down to the odd observations and slip into occasional fantasy. He’s an unreliable narrator in the sense that he’s seeing the people and places around him from the perspective of his younger self. It’s not an intentional unreliability. He’s Kevin Arnold, and this is the story of his own…wonder years.

Quality comedy shows are rare these days. If you dump the toilet humor, innuendo, manic and plain droll shows from the lineups over the years, we would have a lot of dead air. The Wonder Years didn’t rely on any of that for its laughs. Instead the show delved into an innocent sincerity that managed to connect with its audience. This is one of those perfect storms where the quality permeated every aspect of the series. The show might have been set in a specific time period, but the moments themselves were timeless. As Kevin grows older, he goes through the same kinds of things kids still go through today. The context might be radically different, but those emotional beats have been around as long as we have. The writers didn’t feel the need to hit you over the head with punchlines until you were numb. The audience has been trusted enough to get it…and we do. A lot of that is the writing, but I can’t say enough about Fred Savage. He was a natural. At such a young age he was expected to carry the show. It’s all through his perspective, so he’s in every scene. At times he’s called upon to merely reflect an emotional beat delivered by the narration. Without saying anything, Savage manages to reach out and touch you with whatever it was he was going through at the time.

You might be asking yourself what took so long for this show to finally land on DVD. The answer is that once again, the powers that be here did something right. The music was a huge character of this show. Each episode is loaded with the songs of the era. They weren’t merely inserted to place us in the time. They were carefully selected to enhance the emotion of the moments. I don’t know who selected this stuff. The plethora of interviews isn’t exactly clear, but most of these selections were spot-on, saying in a few lines of song what twenty pages of script couldn’t have accomplished. But of course that created an almost insurmountable problem with putting the show out on home video. The songs weren’t licensed for home video and cost a small fortune to include. Too many shows like WKRP In Cincinnati opted to replace the music to get the show out. That experiment failed miserably, and the official release of that show lasted just one season. Time Life and Star Vista’s decision to pay for the original music to remain was both brave and essential. I think you’ll find it was worth the wait it necessitated. I can’t even imagine the show starting with anything but Joe Cocker’s soulful rendition of The Beatles’ A Little Help From My Friends.

It’s not just the music that needs to be commended here. These guys did this release with the fans in mind. They did it right and will likely find themselves greatly rewarded for the effort. Not only is every single song included, but this is the largest collection of extras I’ve ever encountered on a television series release. Each season has a collection of extras that are drawn mostly from various interviews and pieces of a reunion of the characters. These aren’t just short promotional interviews, either. Each lasts from 20 minutes to nearly an hour. There are over 30 of these included in this set. You get features on the music, school days, the family, the generation, the relationships and tons of focus features on the characters. There are over three hours of the reunion footage found throughout the collection. Each season has a collection of extras that average 2-3 hours. Then there are four bonus discs each loaded with about five hours of extra features. Trust me when I tell you that every aspect of this show gets a plenty of coverage. The final figure came in at nearly 40 hours of bonus material.

You also get a metal locker that looks like the school lockers on the show. There are some magnet decorations you can use or not. Inside the locker you’ll find two folders that contain the discs. This is the only flaw I can find and my only complaint with the release. All of the discs are in cardboard sleeves. That means you have to handle the playing surface, and you need two hands to get them back in the tight space. There’s also too high a chance to scratch them, and I recommend you substitute better sleeves or cases for your discs if you want them to last. You also get two notebook-styled booklets that give you plenty of information on the show and each episode. Then there’s a yearbook that contains some whimsical stuff from the cast and crew. You get plenty of photos and drawings in these booklets. A lot of thought and money went into putting this set together. These guys knew this was going to be quite an event for fans, and you just will not be disappointed. How could you?

Gino Sassani is a member of the Southeastern Film Critic's Association (SEFCA). He is a film and television critic based in Tampa, Florida. He's also the Senior Editor here at Upcomingdiscs. Gino started reviewing films in the early 1990's as a segment of his local television show Focus. He's an award-winning recording artist for Omega Records. Gino is currently working on his 8th album Merchants & Mercenaries. Gino took over Upcomingdiscs Dec 1, 2008. He works out of a home theater he calls The Reel World. Favorite films: The Godfather, The Godfather Part II, The Body Snatcher (Val Lewton film with Karloff and Lugosi, not the pod people film), Unforgiven, Gladiator, The Lion King, Jaws, Son Of Frankenstein, The Good, The Bad And The Ugly, and Monsters, Inc.
Signed Sealed Delivered Christmas Into the Woods: Original Broadway Production (Blu-ray)