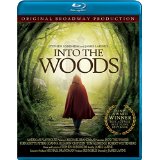 There’s no shortage of wishing (not to mention pining, longing, yearning, etc.) in some of our most beloved fairy tales. Into the Woods — the Tony-winning Broadway musical created by Stephen Sondheim and frequent collaborator James Lapine — illustrates what happens when certain characters get their storybook ending. Since there’s a big, shiny Disney adaptation on the way, it made sense for Image Entertainment to offer a performance of the stage show on Blu-ray. However, I wish…some more effort had been put into this release.

What you get on this Blu-ray is a taped performance of the 1987 original Broadway production that first aired on PBS in 1991 and was previously released on DVD way back in 1997. The good news is this release offers theater geeks the all-too-rare chance to watch a beloved show with its terrific original cast. (Into the Woods has been revived several times in the ensuing years.) The not-so-good news — and we’ll get into it more in the Video section — is that the show very much looks like something that originally aired on PBS in 1991.

“Once upon a time in a far-off kingdom lived a fair maiden, a sad young lad, and a childless baker with his wife.”

The “fair maiden” you probably know as Cinderella (Kim Crosby), and the “young lad” is a boy named Jack (Ben Wright) who acquires some magical beans and climbs a beanstalk. The Baker (Chip Zien) and his Wife (Joanna Gleason, who won a Tony for her work) were invented for Into the Woods. The couple lives next to a haggard old Witch (Bernadette Peters) who informs them about a curse on the Baker’s family tree. The couple must venture into the woods to fetch the ingredients for a potion that will break the curse: “the cow as white as milk, the cape as red as blood, the hair as yellow as corn, and the slipper as pure as gold.”

Of course, those items happen to be some of the most iconic Brothers Grimm creations. As a result, the Baker and his Wife also encounter a gluttonous Little Red Riding Hood (Danielle Ferland) and the ravenous Wolf (Robert Westenberg) who wants to make her his meal. There’s also Rapunzel (Pamela Winslow), who has a surprising connection to a couple of the main characters. The story even finds room for a pair of buffoonish princes — Rapunzel’s Prince (Chuck Wagner) and Cinderella’s Prince (Westenberg again) — who are more charming than they are sincere.

I haven’t even mentioned everyone in the story, or how they cross paths. However, you can probably tell from the crowded cast of characters that the show and story are as intricately dense as Sondheim’s more rapid tunes. Actors are frequently sprinting onto and off the stage to hit their marks and execute a scenery change. No wonder there’s a well-dressed Narrator (Tom Aldredge) on hand to help make sense of everything. Frankly, it becomes a little exhausting after a while, especially for a show that clocks in at 153 minutes. (The running time on this disc includes brief opening and closing credits, along with an intermission.) As a result, I believe this is a show that plays significantly better on repeat viewings; the first time through, you’re likely to be spent from having to keep up with all the various plotlines.

Once you’re free from having to keep track of everything that’s happening, it’s easier to appreciate the show’s ambition, both from a story and musical standpoint. The Woods mean a wide variety of things for a wide variety of characters. (Monetary gain, best chance at love, clinging to family that’s been lost or hopefully gained, etc.) For each of the characters, the Woods represent an escape from the stasis of everyday life, whether they’re striving toward an impossible goal or they’ve gotten exactly what they wanted and don’t know what to do next. This is heady stuff for what, on the surface, appears to simply be the fairy tale mash-up that set the precedent for something like ABC’s Once Upon a Time.

The second acts of musicals tend to be downers, since they follow first acts that typically wrap up on a high note. (Sometimes literally.) Into the Woods is the best example of that notion I can remember; the end of the play’s first act is actually how most stories end, period. So the stuff in the second act of the show is the material typically left out of fairy tales. It’s also more of a slog because it features an array of bummer character deaths and a sense of melancholy that’s not usually associated with toe-tapping Broadway musicals.

Into the Woods won Tonys for Best Book of a Musical (Lapine), Best Original Score (Sondheim), and Best Leading Actress in a Musical (Gleason), but the year was dominated by the spectacle of The Phantom of the Opera. Into the Woods has incredibly clever staging and impressive scenic/lighting design of its own, but it also has a hilariously fake looking cow called Milky White that plays a prominent role.

The new movie is likely to be an even starker contrast to this comparably shabby stage production. Of course, what the show lacks in visual razzle dazzle is made up for by stellar performers like Gleason (who brings dimension and humanity to the stock role of a long-suffering wife who is not-so-secretly more capable than her husband) and Peters (who amusingly does little to hide her New York accent to play the suffer-no-fools Witch). Besides Peters’ “Stay With Me” serenade — her clear, powerful voice belied the Witch’s haggard appearance — my favorite numbers were cheeky duets like the two Prince’s “Agony” or the Wolf’s “Hello, Little Girl.”

Overall, I’m curious to see how it all translates into a lavish Disney film. (For example, I’d be somewhat surprised if anyone wound up casually slicing off parts of their feet to fit into a glass slipper.)

Into the Woods is presented in an aspect ratio of 1.33:1. The 1080p image is arrived at with an AVC MPEG-4 codec at an average of 37 mbps. Unfortunately, this Blu-ray upconversion doesn’t look noticeably better than the DVD that’s been floating around since 1997. To be clear, I wasn’t expecting any miracles: there was never going to be any extraordinarily fine detail given the source, a standard definition taping of a live theatrical performance from the late 1980s. Although color and contrast are solid, I suppose I was hoping for a bit more pop and life given the subject matter. The result is a visual presentation that — like the show’s somber second half — dulls much of the whimsical story.

The DTS-HD Master Audio 2.0 stereo track fares considerably better, even if it can’t quite reach its showstopping potential. All of the songs — many of which feature overlapping lyrics/parts, and must be sung at an accelerated rate — sound clear and surprisingly powerful. There is no hissing, popping or any other signs of aging.

Obviously, this Blu-ray was first and foremost timed to capitalize on the buzz surrounding the upcoming Disney film. That being said, I don’t think it would’ve hurt to put a bit more effort into updating the visual presentation or cobbling together a special feature or two.

Into the Woods is an intricate and interesting musical, even during the parts that don’t necessarily spark. (I found the Cinderella segments to be the least enchanting.) Since this Blu-ray doesn’t really have anything new to offer, I suggest you skip it and just grab the DVD copy from Netflix or your local library.