Posted in: No Huddle by Jeremy Butler on December 19th, 2014 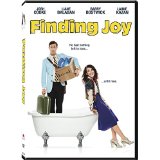 “It is a deliberate mystery the how, when, and if of it all.”

This quote perfectly characterized the entire story of Finding Joy. The reality is this movie has left me questioning: what would you do if you truly believed that your end is near? How would you spend what could be your final days? Would you do charity work as a way of buying your way into heaven? Would you attempt to barricade yourself indoors in order to avoid your fate? The possibilities of what to do are endless; however, in Finding Joy two characters choose to do something most would likely shy away from: fall in love.

Talk about eccentric people. I don’t believe that I have ever seen a more eclectic bunch of characters. Where to begin, I suppose the best place would be with our main character Kyle (Josh Cooke). Needless to say, Kyle is not what we would call a popular guy. Falling behind on the deadline to his newest book, Kyle finds himself pressed for time to complete a novel he has yet to even start.
To fan the fire, he comes home to find all of his belongings on the curb courtesy of his former roommate who has decided he is tired of his mooching. Frantically calling every number in his contacts to find new residence, we are treated to mildly comical montage of everything Kyle has done in his past to alienate apparently everyone who ever knew him, forcing him to seek refuge in the one place he wished to returned: back with his parents, well, with his father to be specific.

Upon his return, things are as you imagine. Kyle is not very welcomed with the exception of his brother who appears to be happy at his return. Albeit a bit cliche at this point, there is obvious tension between Kyle and his father over a reason that was easy to surmise. Drawing it out a bit more would have led to more effective and dramatic reveal. However, the introduction of these characters (i.e. Kyle’s family) is when we are treated to the eccentricity of the movie. I don’t want to give anything away, but simply put, each character was quite unique in their own way with the exception of Kyle’s niece who turned out to be the only sane member of the family.

This brings us to Joy, the girl across the street. Joy is a unique in her own way as well, exhibiting her own brand of living life to the fullest, essentially due to her belief that her time on earth is coming to a close. Joy and Kyle begin to spend a lot of time together, and as such she begins to allow Kyle to channel his focus again and commit to telling a story unlike his first.

The overall story has moments where there is comparable routine, unfolding in certain ways that are predictable such as the fact that Kyle would be forced to return home, as well as the tension between Kyle and his father being tied to the death of his mother. However the relationship between Kyle and Joy was not so easily predicted, as each encounter ended the opposite of the way I expected it to. Kudos to the production team for that; there’s nothing better than being unable to predict human nature.

Jeremy Butler is a film school graduate of the International Academy of Design and Technology. He is been writing for Upcomingdiscs since 2012; however, movies have played a big part of his life for much longer. Favorite genres include horror, science fiction/fantasy, and comedy. Favorite movies are V for Vendetta, Boondocks Saints, Kiss Kiss Bang Bang, and The Godfather.
Holiday Gift Guide Spotlight: ABC Television Annie (2014)