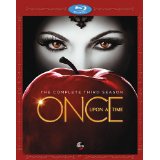 ABC and Disney have some rather entertaining television sets for that hard-to-please television addict on your shopping list. In recent years more and more of us engage in something called binge-watching. With either a DVR or the season sets releases, we watch an entire season of a show in a matter of a few days. I’ll bet you have a binge-watcher on that list of yours. You might want to consider some of the ABC family of shows.

Rick Castle (Fillion) is a very successful mystery pulp-fiction writer with over 26 books hitting the best-seller list. He’s rich, and he’s spoiled. He lives with his mother (Sullivan) who is pretty much a has-been actress who thinks she’s just one part away from stardom. He has a young teen daughter (Quinn) who is more responsible than he is. After having so much fun and inspiration tracking down his fiction copycat killer, he decides to pull strings and become an unpaid consultant for the team. At first that wasn’t so good for team leader Detective Kate Beckett (Katic). Of course, now the whole sexual tension thing has been discarded, and they are an official couple these days. The team is also filled by a pair of detectives. Detective Javier Esposito is played by Jon Huertas and is the macho member of the team. Detective Kevin Ryan is played by Seamus Dever and is the more reserved member of the team, now trying to start a family. The team is led by the rough Captain Victoria Gates, played by Penny Johnson. She likes to think she’s in charge, but she’s not.

For the romantics in the crowd, the highlight of the season is watching the awkward romance between the two play out. It’s all there: The first Valentine’s Day, dinner with the parents, jealousy, and of course a lot of sleeping together. For some of us all of that merely serves as a distraction to the real reason we watch the show. It’s the cases, and the Castle/Beckett dynamic solving them that makes the show work on multiple levels. It’s also the show’s tendency toward odd cases that get Castle all fired up that usually end up a bit more mundane than originally advertised. It’s a good formula, because it’s not the solution that matters here. It’s the journey all the way.

The season begins by wrapping up the whole FBI job that Kate is considering at the end of the last season. Of course, we had the big proposal from Castle, and you can be sure that that wedding prep will dominate the personal stories for the sixth season. Fortunately, there are enough of the fun cases to go around, and for those of us who are not into all the wedding drama to retain our interest. Of course, the season ends with the prospect of the actual event, but I’m sure you know by now to expect some twists and turns along the way and the requisite cliffhanger to lead us into the current season. Fans of the show know the answers by now, but that shouldn’t stop you from keeping up to date in your Castle home theater collection.

Once Upon A Time Season 3 (Blu-ray)

ABC has had a very important asset going for it for years. It’s one that the network has seldom taken any advantage of. That asset is its parent company. You see, ABC is part of the Walt Disney family. With the rich history of stories the studio has in its arsenal going back to the 1920s, it was only a matter of time before some clever people decided to find a way to use that rich history in a television series. That time has arrived, and the result is Once Upon A Time. It’s the most clever and original series to hit the tube in a long time.

Grey’s Anatomy has continued to surprise fans and critics alike. As far back as the seventh season there was strong talk that the show was drawing to an inevitable close. Since that time we have seen the end of the spinoff series Private Practice, which I always considered to be a better show. Nothing’s changed; as the show entered its ninth year there was the same talk both from outside and from within that the series was ending. Not only did it not end, but the show took some serious strides in ratings and storytelling. Now, going into 10 there is still talk of the show ending. The huge talk involves Sandra Oh leaving the series, but cast changes have been going on every year for this series. Huge regulars have left or even been forced out. Over the years we saw huge names like Isaiah Washington, Kate Walsh, Katherine Heigl, T.R. Knight, and now Eric Dane and Chyler Leigh. Is Grey’s going away? I’m not completely sure. What I am sure of is that fans should not miss the 10th season on DVD.

Of course, the year is marked by the planned exit of Sandra Oh as Dr. Wang. Fans knew going in that it was going to be her last year, and I have to say she gets the most elaborate sendoff yet on the show. The writers took their time and built toward the exit. It led to one of the season’s better shows where Wang lives alternate lives in her mind. We get to see how different choices might have played out for her. We also get Grey’s look at what the future might look like in technology and even interesting scrubs fashion. I kind of liked the new look. Obviously, it’s all leading to her decision to leave. A surprise guest visit by Isaiah Washington as Burke ends up putting the final exclamation point on her departure. This is after a lot of wasted time on an award hope and a bit of a breakup with Grey. They’ve built her up to be such a stellar and driven doctor that this outcome had to happen eventually if the show was going to continue to be honest.

You get all 24 episodes, deleted scenes and a gag reel. You’ll get a look at how they do all that medical jargon and what those things are they’re operating on. There’s a focus feature on Sandra Oh. She gives us a tour of the production offices where we stop in editing for a look at her milestone moments including her first appearance on the pilot.

The season finale gives us the goodbye for Wang. The show will continue; for how long, I’m not sure. I guess for fans, “You’ve got to enjoy it while you can.”

Gino Sassani is a member of the Southeastern Film Critic's Association (SEFCA). He is a film and television critic based in Tampa, Florida. He's also the Senior Editor here at Upcomingdiscs. Gino started reviewing films in the early 1990's as a segment of his local television show Focus. He's an award-winning recording artist for Omega Records. Gino is currently working on his 8th album Merchants & Mercenaries. Gino took over Upcomingdiscs Dec 1, 2008. He works out of a home theater he calls The Reel World. Favorite films: The Godfather, The Godfather Part II, The Body Snatcher (Val Lewton film with Karloff and Lugosi, not the pod people film), Unforgiven, Gladiator, The Lion King, Jaws, Son Of Frankenstein, The Good, The Bad And The Ugly, and Monsters, Inc.
This Is Where I Leave You (Blu-ray) Finding Joy