This Is Where I Leave You (Blu-ray) 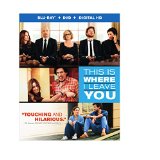 “Everybody’s sad or angry or lying or cheating.”

That seems to be the state of the four adult Altman children even before they are thrust back together following the death of the family patriarch. This Is Where I Leave You has all the makings of a great dysfunctional dramedy. It has a terrific cast and is based on the very popular book by Jonathan Tropper, who wrote the screenplay. Yet the movie comes up well short of delivering on its promise. Despite some strong acting, a handful of funny beats, and a passing similarity to another ensemble movie where characters who were formerly close are brought back together by a funeral, this movie is less Big Chill and more “Big Shrill.”

“I want all my kids under one roof again.”

This Is Where I Leave You is the story of the Altman family and how blood relations don’t automatically guarantee compatibility or even affection toward the people who happen to share your last name. After the death of her husband, Hillary Altman (Jane Fonda) informs her adult children that his dying wish was to have his kids sit shiva in the family home for a week. (The fact that the Altman’s aren’t particularly Jewish doesn’t make much of a difference.)

There’s sad-sack Judd (Jason Bateman), who recently caught his wife (Abigail Spencer) in bed with his boss (Dax Shepard); Wendy (Tina Fey) is the tough-talking mother who likes to knock back a drink (or three) and who has a neglectful/workaholic husband (Aaron Lazar); Paul (Corey Stoll) is the eldest sibling who stayed behind to run the family business, and who is desperately trying to get wife Annie (Kathryn Hahn) pregnant; Phillip (Adam Driver) is the immature youngest sibling. The movie let us know Phillip is immature by having him rev into his father’s funeral service blasting rap music. We also know that Phillip is the family screw-up because at one point Phillip actually calls himself the family screw-up.

That’s just one of several clumsy notes struck by director Shawn Levy, best known for more commercial comedy hits like the Night at the Museum films and Date Night. At another point, Fey’s character calls out Bateman’s Judd for not being able to deal with any situation that is messy or complicated; later on, Judd actually utters the words “I’ve spent my life playing it safe.” This is, coincidentally, the second “estranged siblings reconnect” dramedy I’ve seen this week. But the way The Skeleton Twins revealed bits of info about its characters was downright elegant compared to the way things are spelled out (and yelled out) in This Is Where I Leave You.

Both Date Night and the Night at the Museum films feature pretty prominent actors playing relatively small roles. I haven’t even mentioned that This Is Where I Leave You also co-stars exceptional performers like Timothy Olyphant as the brain-damaged childhood sweetheart that Wendy left behind, Connie Britton as the well-off older therapist Phillip is dating, and Rose Byrne as Manic Pixie Dream Girl Penny, who used to have a crush on Judd and helps snap him out of his funk. The movie clocks in at a reasonable 103 minutes, so most of these supporting players either get fleeting screen time or (in the case of Byrne) only have one quality to play. The result is they all feel thoroughly overqualified here.

The situation is a little better with the main characters. Again, Levy seemed to have the clout to cast any four actors he wanted to play these roles. Instead, the people he settled on don’t even seem remotely related to each other. And I’m not just talking about the lack of any physical resemblance. With the exception of smart-aleck soulmates Bateman and Fey, these four performers don’t seem to have much to do with each other in terms of on-screen temperament. Stoll appears to be acting in a different, tenser movie than Driver, whose unpredictability is welcome, but clashes with the precise comedic rhythm of Bateman. And so on…

Speaking of Bateman, Judd is the de-facto main character: he’s the only Altman we meet prior to the father’s death. I understand the instinct to put a deadpan Bateman at the center of a dysfunctional family storm — it worked to brilliant effect on Arrested Development — but it doesn’t work nearly as well here. Bateman acquits himself nicely during the film’s dramatic moments, but the movie itself can’t seem to settle on a tone that works. For every little moment that works — Judd and Wendy chatting on the roof of their family home, Paul noting that the reason the siblings don’t talk is because they don’t like each other very much — there are two moments that make you roll your eyes and cringe.

Without giving too much away, these moments include a car randomly getting tipped over and an out-of-leftfield lesbian twist. And if you were worried that this movie wasn’t going to include a cliched bonding scene where the siblings get high together, or a moment where two of the brothers get into a goofy physical confrontation, then you’re in luck: this movie has both of those things.

This Is Where I Leave You has too many things actually, including a goofy rabbi (Ben Schwartz) and a romantic ice skating digression that belongs in a cheesy ’80s movie. Personally, I think it might’ve been wiser to keep it all in the family by simply telling a funny, poignant story about adult siblings and the things that actually bond families together.

This Is Where I Leave You is presented in an aspect ratio of 2.40:1. The 1080p image is arrived at with an AVC MPEG-4 codec at an average of 25 mbps. Whenever the action moves outdoors (the outdoor funeral scene; Judd connecting with Penny in town), this Blu-ray delivers a pleasant, sun-kissed image with color and contrast that are totally on-point. But when the action moves indoors, the picture is considerably duller. (I spotted some instances of aliasing.) Maybe this is a conscious decision to reflect how unpleasant it is for the Altman siblings to be forced to sit shiva inside the Altman house for a week, but it makes for an overall less-than-stellar viewing experience. I’m actually leaning toward those indoor scenes looking somewhat more lifeless on purpose, if for no other reason that the rest of the visual presentation is highly competent. Black levels are deep elsewhere (the clothing in that funeral scene) and clarity — more so than fine detail — is quite impressive throughout.

The DTS-HD Master Audio 5.1 track isn’t asked to do much heavy-lifting beyond conveying the dialogue. That’s a trickier task than it sounds like since there are often many actors speaking at once, but the track displays nice separation and clarity. The score and songs occasionally pop up on the rears without overwhelming the surround sound field. Otherwise, it’s all quiet on that front, save for the ambient noise (dog barking in the neighborhood; bar chatter) that pops up once in a blue moon.

Points of Departure: (20:19) Contains a series of featurettes that focus on the sibling relationships in the film, the actors who play them out, and director Shawn Levy. They include “The Brother-Sister Bond” (5:38), which focuses on Bateman and Fey’s characters; “The Matriarch” (3:59) reveals that Fonda was very adamant about playing this role; “Sibling Rivals” (5:04) focuses on the characters played by Driver and Stoll; and “Choreographed Chaos” (5:38) has Levy talking about how he cashed in all his previous box office hits to make this film, which he’s the most proud of. There is no Play All option.

The Gospel According to Rabbi Boner: (6:27) Ben Schwartz is funny enough in the film as the rabbi who can’t outrun his childhood nickname — and he’s an *extremely* funny pest on Parks and Recreation — but I’m not sure his riffing and outtakes are worthy of their own special feature. Tropper also turns up to talk about the real-life inspiration for the character.

Deleted Scenes: (13:34) If you feel like Kathryn Hahn got the short end of the stick in the theatrical cut, this is the place for you. There are six chapters in all, but the highlights are extended versions of Annie’s aggressive/inappropriate advances to Judd. There’s also a tender moment between Judd and Penny by a swimming pool and a little more Rabbi Boner, in case you didn’t get your fill with the previous special feature.

The Narrative Voice — A Commentary with Shawn Levy and Jonathan Tropper: That might be the fanciest title for a feature commentary I’ve ever seen. Levy announces this is his first ever commentary with another person, but proves to be very conversational with Tropper, whom he obviously admires a great deal. The duo point out bits that were improvised and are very complimentary of the cast, which is understandable because this is an excellent cast. Fairly standard commentary that doesn’t feel totally essential. (Levy confirms Fonda’s breasts in the film were prosthetic.)

The Narrative Voice — A Discussion with Shawn Levy and Jonathan Tropper: (4:28) The pair talk about their collaborative relationship. Basically, Levy gushes over Tropper’s novel and his writing. Meanwhile, the author reveals that it was Levy who insisted on remaining faithful to the source material since Tropper had drifted away from the original text over the course of adapting it to film. They also explain why a gag from the book involving a birthday cake wouldn’t work on the big screen.

The cast and performances in This Is Where I Leave You are too good for anyone to totally dismiss this film, even if those performances don’t all make sense in the same movie.

The end result is certainly less than the sum of its parts; simply put, this movie really should’ve been better than it was. However, you might still want to give it a peek for the periodic moments that do pop. (Or if you want to see a family that’s even more screwed up than yours.)