The Nine Lives of Christmas

Posted in: No Huddle by Brent Lorentson on December 24th, 2014 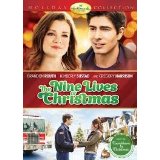 It’s the holidays as you all are well aware of by now, and if not, well, you may have some last minute shopping to do.  But for the rest of us, finding time between eggnog parties and decorating, to stay in the holiday spirit I try and squeeze in as many holiday films as I can.  Unfortunately for my girlfriend, to me a holiday film is Lethal Weapon, Gremlins and Die Hard.  But on the bright side, here at Upcomingdiscs we are given titles that we normally wouldn’t give a look to, and in the case of The Nine Lives of Christmas, this little Hallmark film turned out to be a sweet little gem.

No, seriously, guys, don’t roll your eyes; I know the words Hallmark films seem a bit scary, but this is a film that really isn’t half bad, and what may help make it a little more attractive is that it stars Superman himself, Brandon Routh.  Routh plays Zachary, a firefighter that is living up the single life dating beautiful models and working on remodeling a home while he’s keeping the town safe from burning down.  It’s while coming home he rescues a stray cat and his life takes a drastic turn, and though he originally has no plans of keeping the cat, the cat manages to work its feline magic and warm this fireman’s heart.

While all this is going on, we meet Marliee (Kimberly Sustad) who is juggling being in school to become a veterinarian as well as working at a local pet store.  For guys watching and wondering, Marliee is pretty much that perfect girl our parents always hope to settle down with.  And it’s at a chance meeting at the supermarket where Zachary first bumps into Marliee as she dispenses a little cat 101 advice to him.  The cute awkwardness is effective, and from the get-go you know and want these two to get together, but of course things can’t be so simple.

This is kind of the perfect film for the holidays if you are a guy who is trying to show a new girlfriend your softer side, I know, guys, you still want to roll your eyes, but you haven’t heard the magic of this film yet.  Personally I view this film as though Zachary is really Clark Kent and he simply just doesn’t have the powers that make him Superman, but still he has the heart of what the Kents instilled in him.  Is this what the film intended to do?  Of course not, but perhaps my geeky mind can’t help but think how great this film is as an alternative universe for the man from Krypton.

Looking past my fantasy vision of the film, what I liked most about the film is that despite the ending you see coming just by knowing it is a Hallmark film, the path the film takes is actually quite the unexpected.  Everything about the film reflects this perfect idyllic small town where seemingly nothing bad could ever happen, but the drama that occurs between Zachary and Marliee is enough to have me question if these two really will end up together, because it tackles a subject we don’t see enough, the notion of how some people just feel they don’t deserve to be happy and they simply sabotage a good thing when they have it.

Is this a Christmas classic?  I wouldn’t go that far, but it is a sweet film that works its warm and fuzzy fingers around you despite how much you resist.  I enjoyed this more than I expected, and I’m not ashamed to admit it, sometimes we all need a break from the crazy, the violent and the vulgar and simply need warm and fuzzy entertainment to curl up to with our loved ones during this time of year.

Brent Lorentson is a horror writer and film critic based out of Tampa, Florida. With a BA in Digital Film, he co-wrote and co-directed Scavenger Hunt. His short stories have appeared in various horror anthologies. In 2019 his short script Fertile Blood will be a part of the anthology horror film Slumber Party. He is currently working on his first novel A Dark and Secret Place set to be released in late 2019. Favorite Films: Taxi Driver, Fight Club, I Saw the Devil, The Wild Bunch, Dawn of the Dead, A Clockwork Orange, Pulp Fiction, Heathers, The Monster Squad, and High Fidelity.
Edith Wharton: The Sense of Harmony Holiday Gift Guide Spotlight: A&E