Posted in: No Huddle by Jeremy Butler on January 9th, 2015 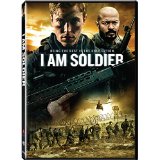 British Special Air Service (S.A.S.), the British special forces training. Becoming the elite is easier said than done, and I Am Soldier demonstrates that quite well. The transition is not just about physical strength and ability; as it turns out the mental aspect is more essential than that, for it takes great willpower and resilience to battle the trials and tribulations, the ability to push on while the rest of you is begging to stop. Inside this film, possibly for first time, we are treated to the training that goes into becoming S.A.S.

Sgt. Mickey Tomlinson (Tom Hughes, The Game) is a chef in the British Army; haunted by a tragedy that resulted in the lost of a comrade, Mickey volunteers more the most difficult training the Army has to offer: selection for the Special Air Service. From the moment of arrival, he finds himself challenged by superior officer Staff Sgt. Carter (Noel Clarke, Star Trek: Into the Darkness) as well as his fellow recruits, questioning why a chef of all people would volunteer for elite training that possesses the lowest success rate. Despite everyone’s doubts, Mickey proves himself capable among the recruits, succeeding where many fail or quit.

As the training goes on, it becomes apparent that Mickey is more than meets the eye. However the training is not the only obstacle that Mickey must overcome, as the tragedy that has consumed his life is still fresh in his mind, and he must overcome it if he truly wishes to earn his place among the elite.

Admitting my bias (to all those that don’t know me, I was born in United Kingdom and I am currently a service member), I thoroughly enjoyed I Am Soldier; it has everything a great film needs: intriguing story, compelling lead, chemistry among cast members.

Starting with the intriguing story, albeit the story of soldier weathering physical and mental strain is not an original storyline, it is one the public never gets tired of seeing. From G.I. Jane to the recent Unbroken, the world wants to see tales of overcoming adversity and accomplishing a goal that seems out of reach. It gets us pumped, or at least I know that’s what it did for me. (I got down did some push-ups upon the completion of the film.) Further more, personal tragedy is a good motivation tool and catalyst for any event; it makes us doubt our worth and purpose, but in the end when you overcome it is when you as well as the audience reach catharsis.

Before watching this movie I was unaware of Tom Hughes; now I can promise he will be difficult to forget. He has a rare ability to express a great deal without saying much. His character is a quiet, reserved type who doesn’t say much, but I was able to feel every emotion that was meant to be conveyed. There are two good examples of this, the first being during a scene where he offers encouragement to a fellow recruit that is on the brink of quitting and the other when he speaks of the accident that haunts him. During both scenes Hughes speech is direct and to the point, but it is the emphasis (the belief in the first scene and the pain the second) behind his speech that makes the interaction memorable.

Finally, there is only one instant of chemistry between co-stars that I find worth mentioning, and it is between Hughes and Clarke. Ironically Clarke is one of the people Hughes shares the least amount of screen time with, which only goes to show the importance of making a lasting impression. Despite being in a circumstance where the characters are usually shown as antagonistic to one another, that wasn’t the case here. The two interacted with one another with an obvious level of respect despite Clarke’s character being his superior.

I Am Solider is a tale about resilience, courage, and belief in oneself. It can easily be used as a good movie experience as well as a motivational tool. The cherry on top is that it provides a great view into the training that it takes for a soldier in the United Kingdom’s Army to be worthy of wearing the tan beret. Based on what I saw, believe me, the people who wear that beret earned it.

Jeremy Butler is a film school graduate of the International Academy of Design and Technology. He is been writing for Upcomingdiscs since 2012; however, movies have played a big part of his life for much longer. Favorite genres include horror, science fiction/fantasy, and comedy. Favorite movies are V for Vendetta, Boondocks Saints, Kiss Kiss Bang Bang, and The Godfather.
Looking: The Complete First Season (Blu-ray) Dinosaur 13 (Blu-ray)