Posted in: Disc Reviews by Brent Lorentson on January 9th, 2015 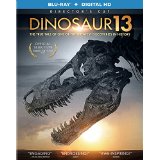 Even though in this documentary we may not get to experience T-Rexes chasing after unfortunate paleontologists while running amuck in a theme park, Dinosaur 13 still manages to be an engaging adventure from start to finish.  This is a film that reaches out to all the young kids inside all of us who while growing up dreamed about what life was like when dinosaurs once ruled the world.  It taps into that adventurous bug that was once inside all of us as kids about exploring and discovering worlds that have not yet been discovered and creatures that now can only survive in our imaginations.  Dinosaur 13 follows one man’s journey as he went from making a discovery of a lifetime that would also in turn deliver the most crushing heartbreak of having a dream torn from his grasp.

In 1990 Peter Larson and his team made a discovery of a lifetime when they found a near-perfectly-preserved T- Rex.  They would go on to name it Sue (after one of the female members of the Black Hills Institute of Geological Research), and Sue would go on to become one of the greatest discoveries not just in South Dakota but in the United States.  But where the documentary goes on to give a closer look is the controversy that surrounds Sue and simply who really does own the rights to this grand archeological discovery.

Using footage taken from 1990 thru 1997 as well as footage shot with the main players and where they are now, director Todd Douglas Miller gives us a thorough look at the victories achieved by Peter Larson, but more so a look into the frustrating process of how his discovery was not only taken from him by the government but eventually he was imprisoned.  We see the hurt Larson still struggles with in this loss, even though it has been well over a decade since all the events came to pass.

This is beyond a story about simple greed, a love affair that one man can have when he becomes so passionate about his work.  Sure, there is some excellent photography with the modern-day images as well that the very old and beat up VHS footage to take us into the past when these events were going down.  But what keeps the viewer engaged is listening to Peter and his fellow coworkers and their passion behind their discovery of Sue.  These individuals are natural storytellers and manage to grip the viewer from the start and have us root for them down to the impossible heartbreaking finale.

While young kids may have trouble being engaged in this film, this should be a film for young and old to see and appreciate the effect of what it is like to chase after a dream and to have it taken away.  It’s not a lesson to scare one away, but instead it becomes inspiring as even in the face of defeat Larson and the members of his team press on and continue to do what they love, and they continue to endure because of their passion.  It’s a story 65 million years in the making, and it’s entertaining as much as it is educational. That’s an accomplishment all on its own.

Dinosaur 13 is presented in an aspect ratio of 2.39:1 The 1080p image is arrived at with an AVC MPEG-4 codec at an average of 27 mbps.  As I mentioned above, the film is a mixture of old VHS footage as well as video shot for the film.  The footage shot directly for the film is sharp and has an overall warm look to it.  Unfortunately the archived footage is at times a bit of a mess, but it’s to be expected considering the format it was shot on way back then.  The archived footage does make its impact as it ranges from footage when they were first digging up Sue, to some footage of protesters rallying against the military as the government was seizing the fossils.  It is engaging images throughout, and despite the quality, it still makes an impact.

The DTS-HD Master Audio 5.0 mix is a bit much, really.  Mostly this is a story told from the various participants with little to no voiceover unless it’s carryover from one of the interviewed subjects.  I wish there had been a narrator in place to fill in the gaps of time where in the film we instead get small text to fill in the blanks for the audience.  There is a very pleasing score performed by Matt Morton, but this isn’t much of an audio track to get too excited about.

Deleted Scenes: (3:46)  I’m not sure why any of this footage was taken out considering it mainly consisted of a brief glimpse of an Indian ceremony and footage of Peter Larson getting back to work after his release from prison.

Continuing The Story of Sue: (17:45) Here we get to see where the story continues as the FieldMuseum in Chicago prepares and exhibits Sue to the public.  The interesting thing is how the museum is allowing science to use Sue as their test subject to get a better look into her past and understand how life was back then.

Complete Auction of Sue: (10:19) Shot on what looks to be VHS, we see the entire auction where Sue was sold off.

How To Build A Dinosaur: (1:49) A very brief look at the process of what it takes to get a dinosaur from out from the rock to being put on display in a museum.

This is an engaging and heartbreaking story that shows us that sometimes following your passion can and will cause you some great pain despite good intentions.  Peter Larson is for me a hero, and I hope somewhere out there he finds a prize that is even grander than his discovery of Sue, but we all know that it is those first loves that are hardest to let go and will cast a shadow over us as I imagine it does for him.

Brent Lorentson is a horror writer and film critic based out of Tampa, Florida. With a BA in Digital Film, he co-wrote and co-directed Scavenger Hunt. His short stories have appeared in various horror anthologies. In 2019 his short script Fertile Blood will be a part of the anthology horror film Slumber Party. He is currently working on his first novel A Dark and Secret Place set to be released in late 2019. Favorite Films: Taxi Driver, Fight Club, I Saw the Devil, The Wild Bunch, Dawn of the Dead, A Clockwork Orange, Pulp Fiction, Heathers, The Monster Squad, and High Fidelity.
I Am Soldier Selma