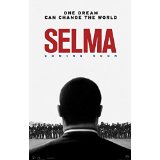 “We negotiate, we demonstrate, we resist.”

Early on in Selma, Martin Luther King Jr. succinctly summarizes his preferred method for affecting change during the Civil Rights Movement. The film then proceeds to effectively dramatize each bullet point in that mantra. Selma sometimes looks like the typical “Great Man” biopic and it is very much a period piece rooted in a specific time and place. But the film still manages to feel alive and relevant today by embracing the deeply humane — and deeply human — spirit of Dr. King’s righteous work.

It seems impossible, but Selma marks the first time MLK has had a starring role on the big screen. (There have been documentaries and made-for-TV movies like 2001’s Boycott, featuring the great Jeffrey Wright as King.) In other words, King has been ready for his close-up for a very long time. Coincidentally, that’s precisely how Selma begins: there is a tight shot of King (David Oyelowo) as he rehearses his Nobel Peace Prize acceptance speech in 1964. Maybe it’s because King was meant to look uncomfortable being so far from his work — and wearing an ascot in Norway — but I didn’t immediately buy Oyelowo as King. However, as the film progresses — and as Oyelowo’s sing-songy mimicking of King’s signature speaking style started to seem more weary than drowsy — it’s easier to become immersed in the story and his performance.

“Let’s not start another battle when we haven’t even won the first.”

Selma would be worth watching even if it merely chronicled the 50-mile Selma-to-Montgomery voting rights march in 1965 led by King, Hosea Williams (Wendell Pierce), James Bevel (Common), and John Lewis (Stephan James) of the Student Nonviolent Coordinating Committee (SNCC). African Americans technically and theoretically were granted some voting rights protections through the Civil Rights Act of 1964, but a mixture of intimidation and impossible technicalities made it virtually impossible for them to exercise those rights in many Southern counties. Selma‘s closest recent doppelganger is Lincoln, another historical civics lesson disguised as a Great Man biopic. Lincoln depicted the complex political cajoling that was required to ultimately pass the 13th Amendment.

This version of King is already a celebrity who has the ear of President Lyndon B. Johnson (Tom Wilkinson), and there are just as many scenes of the shifty political maneuvering required to pass the Voting Rights Act of 1965 as there are of the rousing speeches King is most famous for. King decides to take Selma up as his latest “cause celebre”, which results in a great deal of attention along with a great deal of resentment from many different sides. And I’m not just talking about the sobering punch to the face King absorbs shortly after his arrival. SNCC leaders are openly irritated that King gets to essentially parachute into Selma and become the public face of their efforts after they laid the groundwork. (Similarly, it’s highly unlikely Selma gets made if it’s a film focusing on SNCC’s efforts rather than being told from MLK’s perspective.) There’s an excellent scene in which King outlines the importance of — and his reasoning for — playing certain things up for the camera and attracting national attention.

Selma is made with uncommon style and assuredness considering it comes from relative newbies. (This is only director Ava DuVernay’s third feature film, and writer Paul Webb earns his first screenwriting credit here.) In fact, there are a couple of instances that arguably have a little too much style: the aftermath of the bombing of a black church in Birmingham and some of the beatings in Selma — including the famous “Bloody Sunday” police assault on a bridge — are shown in a slo-mo style that walks a line between brutally artistic and exploitative. The film, like virtually any work of fiction based on real-life events, has been slammed with some claims of historical inaccuracies, with the biggest bone of contention being LBJ’s role and attitude toward Selma.

Personally, I feel like Selma gets more than enough right to avoid being tabbed as some sort of fraudulent account of history. The dramatic liberties it does take are ones that should be expected from any work fiction that is first and foremost meant to entertain. So while the film’s depiction of MLK and LBJ may not exactly be spot-on, the movie does convey the notion that the president had the sort of ambitious legislative agenda that could cause him to put the Voting Rights Act on the back burner for a while. More impressively than getting every single historical detail precisely right, Selma succeeds in humanizing one of the most iconic figures of the 20th century.

It goes beyond the pain and self-doubt that seeps into King once his work — and other personal shortcomings — place a strain on his marriage to wife Coretta (Carmen Ejogo). King is almost always depicted in popular media as a larger-than-life figure addressing the masses, so it’s a little bracing seeing him hang around with other Southern Christian Leadership Conference members while they bust each others’ chops. (I’m pretty sure this is also the first time we’ve ever seen MLK take out the trash on-screen.)

Despite a slightly bumpy start, Oyelowo totally succeeds in both summoning King’s outsize magnetism and creating a human-scale character. Selma boasts bold-faced producers like Brad Pitt and Oprah Winfrey, who appears in a small role as civil rights activist Annie Lee Cooper. As a result both Oyelowo and DuVernay’s film as a whole are supported by impressive production values and a strong cast. Wilkinson is over-the-top, but plays LBJ less as a straight-up antagonist to King and more as a recognizably conflicted, overwhelmed and butt-covering politician. On the other hand, Tim Roth oozes oily charm as the decidedly non-conflicted Alabama Gov. George Wallace. Turns out there also Americans in this film! Actors like Martin Sheen, Cuba Gooding Jr. and Giovanni Ribisi play relatively small parts. The story lends itself to appearances by other real-life civil rights activists like Andrew Young (Andre Holland) and even Malcolm X (Nigel Thatch), but the film threatens to become bloated by including subplots like the one about the FBI (led by an unhinged Dylan Baker as J. Edgar Hoover) keeping tabs on King.

In the end, DuVernay and her team do an exemplary job of telling a powerful story that manages to entertain while adhering to a civil rights icon’s philosophy. It took a long time for a movie worthy of having Martin Luther King as its main character to come along, but “Selma it is.”