Posted in: Podcasts by Gino Sassani on January 12th, 2015 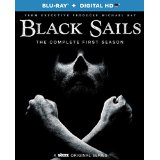 Anyone who has seen the Starz pirate drama Black Sails knows who Hannah New is. She plays the feisty Eleanor Guthrie. Eleanor runs the Island where all of the pirates sell their booty. It’s a powerful position for a woman of 1715. Hannah New is up to the challenge and I had a chance to chat with her recently about her role on Black Sails. She’s just as much fun as her character. Bang it here to listen in on my chat with Hannah New. There are a few clicks in the audio which were an unfortunate result of our telephone connection. It’s worth the patience.

Gino Sassani is a member of the Southeastern Film Critic's Association (SEFCA). He is a film and television critic based in Tampa, Florida. He's also the Senior Editor here at Upcomingdiscs. Gino started reviewing films in the early 1990's as a segment of his local television show Focus. He's an award-winning recording artist for Omega Records. Gino is currently working on his 8th album Merchants & Mercenaries. Gino took over Upcomingdiscs Dec 1, 2008. He works out of a home theater he calls The Reel World. Favorite films: The Godfather, The Godfather Part II, The Body Snatcher (Val Lewton film with Karloff and Lugosi, not the pod people film), Unforgiven, Gladiator, The Lion King, Jaws, Son Of Frankenstein, The Good, The Bad And The Ugly, and Monsters, Inc.
Selma Girls: The Complete Third Season (Blu-ray)