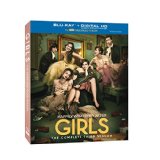 “Writers are a ridiculous class of people who make everything about themselves.”

For many, the current face — and oft-naked body — of “writers who make everything about themselves” is Lena Dunham, the creator/star/writer/director of HBO’s Girls. The equal-parts brilliant and maddening quarter-life crisis comedy became one of the most polarizing shows on TV over its first two seasons, as self-involved heroine Hannah Horvath sought love and a career as a writer in NYC. At the start of season 3, Hannah has both of those things…which is why I’m astounded — and, frankly, pretty impressed — that she remains as egotistical as ever.

Season 3 opens with the customary shot of Hannah (Dunham) in bed with someone. This time, it’s on-again/off-again boyfriend Adam (Adam Driver), who is decidedly back “on-again” after literally breaking down Hannah’s door and sweeping her off her feet at the end of season 2. (The messy business involving Adam’s previous relationship is swiftly and profanely dealt with in the season premiere/”Females Only,” courtesy of guest appearances by Shiri Appleby and Amy Schumer.) Hannah has also made progress in her efforts to write an e-book for a supportive, outrageous editor (guest star John Cameron Mitchell). Meanwhile, as Driver’s star continued to grow — the Force  is strong with that one — it’s not surprising that we found out more about the enigmatic Adam than ever. Season 3 features a force-of-nature performance by guest star Gaby Hoffmann as Adam’s disruptive sister Caroline. Let’s just say Caroline makes Adam — who is described as “dementedly helpful” at one point this season — seem like the normal one in the family. Makes you wonder what their parents are like.

While Hannah is flying (relatively) high, the rest of the Girls are somewhat in disarray. Marnie (Allison Williams) is reeling from being unexpectedly dumped by boyfriend Charlie. (More on this a little later.) Jessa (Jemima Kirke) has checked herself into rehab, but isn’t exactly making the most out of the potentially healing experience; she gets herself booted out by the second episode. Then there’s Shoshanna (Zosia Mamet), who is the youngest of the group and still in college. She is determined to make the most out of her academic (good grades) and social (random hookups) lives, but finds herself coming up short on both counts.

Although Girls can certainly be accused of meandering in its storytelling — as it did with the artful, digressive season 2 episode “One Man’s Trash” — season 3 had a more unifying theme. Even the most notable digression in the third season — Hannah visiting her family when her grandmother (Oscar nominee June Squibb) falls ill — revealed something to Hannah as she watched her mom battle it out with her two sisters: the petty, profane squabbling among close relations doesn’t stop once you’re out of your 20’s.

If season 3 had a theme, it’s that each of the main characters was making a real effort to grow up and improve their lot in life. (Heck, it even extended to secondary characters like Alex Karpovsky’s Ray, who got serious about his coffee shop manager job.) Of course, the degree to which the characters succeed varied greatly. Jessa struggles with crushing boredom as she attempts to live a drug-free life. It’s great to have Kirke back on the show full time after missing a good chunk of season 2 due to her real-life pregnancy; Jessa’s acid-tongued assuredness is a necessary antidote to the other girls’ different shades of insecurity.

Meanwhile, Marnie flails as she tries to carve out an individual identity for herself. If Marnie’s arc this season feels a little haphazard — going from a YouTube humiliation, to a demeaning (for Marnie) gallery job, to crushing on an actor/musician who has a girlfriend — it’s because Dunham and company had to adjust on the fly. Christopher Abbott — who played Marnie’s on-again/off-again boyfriend Charlie during the first two seasons — abruptly departed the show over a reported dispute about his character arc. It could’ve been mildly disastrous, but the show made the sudden departure feel as earth-shattering to Marnie as it must’ve felt to everyone involved with making the show.

Of course, it all comes down to Hannah. Hannah turned 25 during season 3; she also managed to make a road trip to help a friend in need and the death of a colleague all about her and her writing. You probably won’t be surprised to hear that things don’t stay rosy for her throughout the entire season. There’s friction between Hannah and Adam as her professional ambitions take a hit while Adam’s start to take off after being cast in a Broadway play. The finale finds them about to be separated by distance; it remains to be seen if they can remain together otherwise. Also, one of the Girls agrees to kill someone.

Overall, season 3 had some of the best moments in Girls‘ run, highlighted by Ep. 7/”Beach House, which has the four main characters gathering — an increasingly rare sight as they continue to grow up and grow apart — for some forced bonding. You’re not gonna believe this, but things go disastrously. Peppy, ditzy Shoshanna, in particular, reveals a searing side of herself we hadn’t seen. She also slyly and succinctly (and hilarously) summarizes the way a lot of Girls detractors — and even some fans — feel about these immature, imperfect characters: “I’m f—ing sick of all of you.”

Girls: The Complete Third Season is presented in its original aspect ratio of 1.78:1. The 1080p image is arrived at with an AVC MPEG-4 codec at an average of 21 mbps. There were more Girls episodes in season 3 than usual — 12 instead of 10 — but they were presented on the customary two discs, along with the usual treasure trove of special features. As a result, I had an eye open for any potential compression-related issues; luckily, there was no reason to worry. I’ve previously praised the sneakily impressive visual versatility on these Girls Blu-ray releases, and season 3 delivers the most cinematic batch of episodes yet. The funkier urban scenes — a muted, gray-ish palette consistently broken up by fashionable splashes of color — are balanced by warmer, earthier outliers. (Jessa’s stint in rehab; the beach house episode.) Regardless of where the action is taking place, there’s terrific clarity and detail throughout. Not as visually ambitious or striking as other HBO offerings, but still dazzling in its own right.

The DTS-HD Master Audio 5.1 track seems to respect that notion that dialogue is key in a show like Girls. So there is a very clean and defined separation, with the dialogue sticking to the front and the myriad city noises dynamically taking up space in the rears. Fidelity is completely spot-on, but I don’t remember too many stand-out sonic moments in this season overall. (I did enjoy how loud the surround sound field got when Hannah and Shoshanna were blasting Maroon 5, much to Adam’s chagrin.)

(Features available on Discs 1 and 2.)

Deleted and Extended Scenes: (1:01:59) As you can see from the running time, there’s a tremendous amount of material here; more so on Disc 1 (43:15) than Disc 2 (18:44). Highlights include a season-opening sequence that departs from the now-customary shot of Hannah in bed with someone, and an entire subplot with Marnie teaching a spin class. There’s also a quick solo scene between Adam and Jessa, which is a pair-up that needs to officially happen on the show at some point.

Inside the Episodes: (36:48) HBO offers these weekly, behind-the-scenes featurettes for some of its shows, and these feature Dunham dishing on each episode. Definitely worth a watch since the material is obviously so personal to Dunham. For example, she reveals that she drew real-life inspiration for the episode where Hannah’s grandmother dies.

Audio Commentaries: There are six tracks — for Eps. 2, 7, 9, 10, 11, 12 — and they feature cast (Dunham, Mamet, Kirke, Andrew Rannells, Karpovsky) and crew (writer/producers Judd Apatow, Jenni Konner, Dunham again). By now these people are very familiar with each other, so listening to these tracks is akin to hearing a group of friends recount a funny story from their past. Worth a listen for sure.

Lutheran Healthcare Honors Lena: (4:47) Dunham is honored for her support of the Brooklyn medical facility and for raising awareness of mental health issues. Halfway through, the earnest tribute video unexpectedly turns into a roast, with fellow cast members talking about what a monster she is and Dunham herself playing the role of demanding diva.

Gag Reel: (14:21) For some reason, this gag reel is presented in two parts. Part 1 (7:46) seems to focus on the regular cast members, while Part 2 (6:35) highlights guest star flubs and silliness. Well-produced, but too much.

The Making of Girls: (18:36) An interesting survey of the third season featuring interviews, along with footage from the set and table reads. Dunham addresses dealing with the challenge of actor Christopher Abbott’s (Charlie) sudden departure, and the anxieties the characters on the show feel even when things are going well.

Marnie Michaels, “What I Am”: (2:40) As soon as I saw snippets of Marnie’s trainwreck-y YouTube video during season 3’s original run, I immediately hoped the full version would be included on the Blu-ray release. So thank you, HBO…you made my day.

Marnie and Desi, “Bet on Me”: (2:28) The perfectly cheesy/folksy song that Marnie and Desi (Ebon Moss-Bachrach) perform on the show was written by Bleachers frontman/fun. guitarist/Dunham boyfriend Jack Antonoff.

Lil Freckles, “Dancin’ on the D”: (1:47) The full-version of the show’s open-mic, freestyle rap about…well, this is a family website. Feel free to skip.

The fourth season of Girls just got underway. It’ll be interesting to see how the show handles the distance between Hannah and Adam/the rest of main characters.

I felt season 3 was a sharper, more focused return to season 1 form. On top of that, HBO continues to do a top-notch job of putting together supplement-filled Blu-ray releases that highlight the process of making this funny, frustrating show.