Posted in: The Reel World by Brent Lorentson on January 16th, 2015 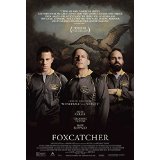 While writing up this review the Oscar nominations are going to be announced in a few hours and for Foxcatcher, any nominations it receives will be yet another footnote in this films journey as it widens its release to a larger audience.  Ever since director Bennett Miller won best director at Cannes in 2014 for the film Foxcatcher has become one of the most buzz worthy films of 2014 with a trio of actors that have had more than their fair share of  praise for their performances.  But is it a film worthy of all its acclaim or is this simply award show fodder for a film no one will remember a year from now (looking at you The Artist)?

The film centers around Mark Shultz (Channing Tatum) an Olympic wrestling champion who lives in the shadow of his older brother David (Mark Ruffalo).  Though the two brothers share their love for the sport that seems to be the only similarity you’ll find between the two.  Where David is well spoken family man, Mark seems to be only driven to wrestle and manage to one day live a life outside his brother’s shadow.  The jealousy we see portrayed against David is more than simple brotherly rivalry, after all David seems to rake in all the cash with personal appearances and has a family, whereas Mark struggles through making speeches to elementary kids for a few bucks.  So it becomes no surprise that when John du Pont (Steve Carell) approaches Mark about joining team Foxcatcher, Mark seizes the opportunity to make a name for himself.

What follows is an examination of how the need to impress a loved one can become more than just an unhealthy obsession but something that can poison and destroy a person.

As Mark begins his training on the Foxcatcher grounds, John watches from a distance with a passion that I believe he would have easily given away his vast fortune to have the talent Mark had.  While Mark trains we see John at work, in the family business with guns.  John is a man that is used to always getting what he wants and believes ever man has a price, but unfortunately the approval he seeks is from someone who has no amount he can write a check for, and that person is his mother played by Vanessa Redgrave.

It’s the performances by all those involved that carry this film, and it is the performance that Steve Carell delivers that makes its greatest impact.  At first glance you notice the prosthetic nose that has been applied to alter his appearance, but it is the man we see on screen and how he portrays he character of John du Pont that has us forgetting any other role Carell has played before.  Carell toes the line of being creepy and sympathetic to this character that at the end of the day is a lonely figure that seems to of never had a friend before meeting Mark.  Even Tatun steps up his game and delivers a frightening performance of a man that seems to fall apart while under the “leadership” of du Pont.

There is a beautiful simplicity to the way this film is shot, it has a very cold feel and lacks any fancy camera movements.  What Miller delivers in his execution is a very unflinching look as the camera stands back and observes as both Mark and John are on a pathway of self-destruction.  Miller for the most part is working in familiar territory his previous films Capote and Moneyball, seem to be melded together as we see the organization of the USA wrestling team by an eccentric male.  Foxcatcher isn’t just a good film; this is an exceptional work of film where the subtle nuances of performance and craftsmanship are blended to execute this so well.  Even the decision to opt out of using a powerful or inspirational score works to the films advantage as the film is rather subdue and very quiet outside the dialogue spoken.

Many may come away from this film and see the relationship between Mark and John as being homoerotic but to look at this friendship in that was seems to easy and superficial.  For some you may have read on line about how the real Mark Shultz has objected to his portrayal in the film as insulting and made it very clear how unhappy he was about the final project, to this I simply say this is an over-reaction in response to the opinions of a few critics.

While this may not be my favorite film of the year, Foxcatcher is certainly a film that deserves the recognition it has received and certainly has some of the best performances of 2014.  Just how will it fair through the rest of the awards season is anyone’s guess, but this is a film that resonates and will haunt you long past its traumatic conclusion.

Brent Lorentson is a horror writer and film critic based out of Tampa, Florida. With a BA in Digital Film, he co-wrote and co-directed Scavenger Hunt. His short stories have appeared in various horror anthologies. In 2019 his short script Fertile Blood will be a part of the anthology horror film Slumber Party. He is currently working on his first novel A Dark and Secret Place set to be released in late 2019. Favorite Films: Taxi Driver, Fight Club, I Saw the Devil, The Wild Bunch, Dawn of the Dead, A Clockwork Orange, Pulp Fiction, Heathers, The Monster Squad, and High Fidelity.
Jessabelle (Blu-ray) American Sniper