Posted in: Disc Reviews by Brent Lorentson on January 15th, 2015 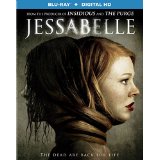 When I think about the swamps of the Louisiana bayou, with the exception of hungry gators lurking beneath the murky depths, I can’t help but think about the connection it has to the supernatural.  I blame seeing Lucio Fulci’s The Beyond for this.  It’s a film that haunted me when I was a kid, and the imagery has stuck with me over the years.  There have been numerous films over the years that have explored the supernatural of the bayou; most successfully we saw this in the Kate Hudson thriller The Skeleton Key.  The bayou just seems to be a location that equates to doom for all those naive enough to relocate to it.  Jessabelle follows suit in this southern gothic thriller that may look the part of a horror film but simply doesn’t deliver.

In the span of just a few minutes we meet Jessie (Sarah Snook) and her boyfriend, before we even have the chance to get to know or care about this couple, we watch as they are involved in a tragic car accident that not only kills the boyfriend but also Jessie’s unborn child.  The tragedy isn’t missed by the viewer, but what is missed is any opportunity to become attached to this couple.

What I do find to be a bit odd is, if the accident took place in the same city she had lived in for what is believed to be a few years, where are her friends?  Why are there not co-workers or simply anyone who would care enough to visit her in the hospital or even be there as support for the boyfriend’s funeral?  We never get to glimpse into this life she had prior to her accident, but instead we are to believe her hand is forced to get in contact with her estranged father who is expected to take her in and take care of her while she is wheelchair bound.  Leon (David Andrews) does what he can with being the frustrated yet caring father, but the character is simply so difficult to like, and after seeing how he “cares” for his daughter, you can’t help but feel she’d be better off on her own.

It’s when Jessie discovers some hidden VHS tapes that her mother (Joelle Carter) filmed before Jessie was born that things get a little crazy. The tapes are of Tarot readings that are being done for Jessie; after all, with her mother dying of cancer instead of telling her daughter stories about herself she instead feels giving a Tarot card reading is more practical.  On a surface level these tapes work to move the story along, but the moment you stop and think about what is happening on screen, well, it all just starts to feel silly and convoluted

As for the paranormal aspect of the film, Jessie seems to be haunted by the spirit of a young woman who may or may not inhabit the home where Jessie’s mother took her life.  Getting into the revealing of the spirit and why it is haunting Jessie would get into spoiler territory, but like the rest of the film, once you start to question it, everything around the reveal falls apart.

The most frustrating thing I found about the film is that on a surface level the film is enjoyable if you can manage to not question what is happening on screen.  The entire cast does what they can to make this story work, but unfortunately the material is just so flimsy that by the time the end credits roll I found it difficult to care at all about what happened.  What’s most impressive is how beautiful the film manages to look.  The cinematography is more than remarkable for your standard horror title.  The bayou comes alive, and upon hearing in the supplements that the location wasn’t even Louisiana, well, that is some movie magic that worked wonderfully here.

Jessabelle is presented in an aspect ratio of 1.78:1.  The 1080p image is arrived at with an AVC MPEG-4 codec at an average of 24 mbps.  As I mentioned this is a good-looking film, and the warmth of the bayou is beautifully captured as in the exteriors we get sharp crisp detail throughout.  As for the interiors and night shots, things do appear a bit soft, but there is enough detail in the textures of the home to get us to believe in this haunted house tale.  There are no artifacts or compression issues; overall this is a nice-looking release.

The DTS-HD Master Audio 5.1 mix is a treat that helped make this film work better than it should have.  Between its score, ambience and hallucinatory effects the track helps immerse the viewer into this dreamlike world.  I can appreciate the films attention to detail in never letting the viewer feel as though they’ve escaped the dreamy effect that only amplifies as we see Jessie go into a dream state or we are seeing paranormal events occur in the home.

Audio Commentary: Director Kevin Greutert, writer Robert Ben Garant and executive producer Jerry P. Jacobs all contribute on this track that while it does offer insight into the film, it still wasn’t enough to answer for the contrivance of the story.  For those who are hoping to gain more insight to the film it’s worth a listen, but not a track I’d recommend to the casual viewer.

Jessabelle: Deep in the Bayou: (9:14) A basic and brief behind-the-scenes look about the making of the film that mostly consists of the actors and production crew commenting on the difficulty of filming on the bayou.

Deleted Scenes: (7:48) This is possibly a film that would only have been better had all the deleted scenes been cut back into the final product.  There is some creepy and effective imagery here that reflects that Jessie was haunted from the crash from the moment the tragedy occurred.

Outtakes: A collection of takes where things didn’t quite go as planned, really an unnecessary inclusion to the disc.

Extended Ending:  Though this doesn’t change much of the film, we get a more fleshed-out conclusion that is worth giving a look after watching the film.

I really wanted to like this, but Jessabelle simply let me down from just about start to finish.  Despite the solid performances by the entire cast, it just is not enough to ignore the contrived plot all leading to the film’s climatic final act.  It’s a good-looking film and does what it can to immerse the viewer; unfortunately it lacks the story to keep us interested.  I guess you could say a glowing review simply wasn’t ever in the cards for Jessabelle.

Brent Lorentson is a horror writer and film critic based out of Tampa, Florida. With a BA in Digital Film, he co-wrote and co-directed Scavenger Hunt. His short stories have appeared in various horror anthologies. In 2019 his short script Fertile Blood will be a part of the anthology horror film Slumber Party. He is currently working on his first novel A Dark and Secret Place set to be released in late 2019. Favorite Films: Taxi Driver, Fight Club, I Saw the Devil, The Wild Bunch, Dawn of the Dead, A Clockwork Orange, Pulp Fiction, Heathers, The Monster Squad, and High Fidelity.
Bad Turn Worse Foxcatcher