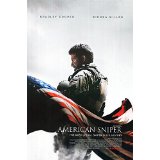 “The thing that haunts me are all the guys that I couldn’t save.”

I have to admit I was a little skeptical that Clint Eastwood followed up his directing stint on Jersey Boys as quickly as he did to shoot American Sniper. The former was far from one of his better efforts, and he looked increasingly out of his element by the time it was said and done. He jumped into his preparation for American Sniper almost immediately, and the results could have been…underwhelming. Instead Eastwood hit his target with the kind of profound impact I don’t think I’ve seen from him since Unforgiven. Unforgiven won a Best Picture award, and deservedly so. American Sniper has been nominated, although Eastwood himself has been snubbed in the director category. It’s a long shot to win, of course, but this is one that most certainly deserves your attention.

I’ve heard from more than one person that there have been too many Iraq or Afghanistan films already and that it is unlikely to have any additional impact with a film of that ilk. That’s like saying there have already been too many comic hero films before going to see The Avengers, or that there’s no need for additional World War II films before sitting down to watch Saving Private Ryan. It’s a ridiculous idea, and Clint Eastwood proves that point with the most compelling film on the terrorist wars to date. It might just be one of the most compelling films on warfare to date.

The subject, of course, is Chris Kyle. Kyle is the deadliest sniper in American military history with 160 confirmed kills. It’s likely the number is considerably higher. Unfortunately, most of us know the name Chris Kyle from the tragic way his life ended not too long ago. He was helping a fellow soldier deal with his life and was killed for his troubles, not on the battlefield but at a gun range. A native Texan, he was treated to the hero’s ceremony he deserved at Cowboys Stadium. Thousands turned out to show their respects, and now Clint Eastwood has shown him the honor of adapting his own memoirs into American Sniper with a screenplay by Jason Dean.

The film begins with Kyle already entrenched as a sniper in Iraq. He is being faced with the kind of moral dilemma no man should ever have to face. His comrades are heading into an ambush. Someone is carrying an explosive device right into their path. He needs to take out the target to protect his brothers in arms. The problem is that the target is a 7-or-so-year-old boy. That terrible choice sets the tone for what’s to come.

We flashback to his childhood where his father delivers a mealtime sermon on the importance of standing up to bullies. It’s a lesson that doesn’t have such an immediate effect. He and his brother become rodeo stars, but Chris finds that his life appears to have no direction. He doesn’t feel fulfilled, and then he sees the attack on the towers on 9/11. He recognizes the bully that his father preached to him about and joins the Navy SEALs. He fights his way through the rigorous training and finds that it wasn’t just a moral lesson he took from his father, but those hunting trips have helped him become a scary effective sniper.

We follow Chris through four tours and the turbulent home life that results from his being away and the changes brought about by the things he’s witnessed and done. He’s given his all but feels compelled to return for each of the four tours, because he feels the need to protect his comrades. It’s a call of duty his wife can’t understand.

Eastwood delivers his film in an almost flawless way. The movie doesn’t make many moral stands about the Iraq War. He finds a way to leave the politics out of the focus of the story. It’s only in a letter from a fallen brother that we get any of the sense of American conflict over the war. This moment is there mostly to strengthen the Kyle character and the disappointment it leaves him with. The film avoids the cliché battles and stays as focused on his character as his character is on his duty. There are so many temptations to deliver some larger pictures, but American Sniper avoids them at all costs. This is a character study in the tradition of some of Eastwood’s own iconic portrayals.

It all rests on the shoulders of Bradley Cooper, who put on 40 pounds to beef up for the part. He’s almost unrecognizable beneath the added muscle and Texan accent. This is perhaps his best performance to date. He’s a man who has killed so many that his nickname is Legend. He takes pride, however, not in the number of lives he’s ended, but in the number he has saved. He wears it as a badge of honor that his brothers feel safer with him looking over them. He plays a man who has a solid belief in good and evil and his ability to protect one and rid the world of the other. It’s a dedication that could cost him his family, but he never wavers.

Sienna Miller also delivers her best performance as Taya, Kyle’s wife. It would have been so easy for this character to fall into a cardboard stock character. We’ve all seen the frustrated wife left behind by a hero before. Hell, just watch a couple of episodes of Army Wives to find out how quickly that can become boring. Miller gives us an angst and emotion that ends up matching the power of Cooper when they are together. Any less actress or director would have had the wife in the shadow of such a powerful character. She’s not in the film a lot; after all, this is about a sniper, and we need to see him do what he does best. Still, she makes the most of the screen time she’s given, and it only strengthens the Cooper performance as a result.

When we see Kyle at work, Eastwood does a wonderful job of building on our anticipation. He never rushes the scene. We find ourselves on that rooftop matching Kyle’s calculated breath and concise movements. Actor and director know how to make us wait just long enough to share in the consequences of each shot. A lesser pair would have rushed the scenes in order to keep the adrenaline going. In the end the adrenaline does indeed deliver, and you’ll find out just how little “action” was necessary to deliver the “hit”.

War is more than hell. War is making the tough choices and finding honor in another person’s death. As strange and twisted as that might sound, it’s the message American Sniper delivers to perfection. Kyle believes, and rightly so, that each death meant many more lived. He tells a doctor that he’s completely prepared to meet his creator and answer for each shot he took.  It’s unfortunate that he found himself in that position sooner than he should have. American Sniper will keep his memory alive. It’s a fitting tribute and some of the most compelling moments on film you will encounter. There are other Chris Kyles out there. “Looks like plenty soldiers need saving.”

Gino Sassani is a member of the Southeastern Film Critic's Association (SEFCA). He is a film and television critic based in Tampa, Florida. He's also the Senior Editor here at Upcomingdiscs. Gino started reviewing films in the early 1990's as a segment of his local television show Focus. He's an award-winning recording artist for Omega Records. Gino is currently working on his 8th album Merchants & Mercenaries. Gino took over Upcomingdiscs Dec 1, 2008. He works out of a home theater he calls The Reel World. Favorite films: The Godfather, The Godfather Part II, The Body Snatcher (Val Lewton film with Karloff and Lugosi, not the pod people film), Unforgiven, Gladiator, The Lion King, Jaws, Son Of Frankenstein, The Good, The Bad And The Ugly, and Monsters, Inc.
Foxcatcher The Identical (Blu-ray)