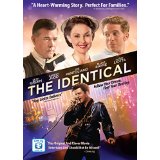 What if Elvis Presley had an identical twin brother no one ever knew about? (It would certainly help explain all those Elvis sightings years after the King’s death.) That’s the kooky conceit at the center of The Identical. Unfortunately, rather than embracing the absurdity of its premise, the movie is an amateurish, uninspiring combination of “by-the-numbers musical biopic” and “painfully-earnest family drama.”

In the Depression-era South, financially-strapped parents William and Helen Hemsley (Brian Geraghty, Amanda Crew) struggle to raise their twin babies. William seeks guidance from tent revival preacher Reece Wade (Ray Liotta), who has been unsuccessfully trying to have a child of his own with wife Louise (Ashley Judd). The Hemsleys decide to let the Wades adopt one of their children, who is given the name Ryan.

Ryan (Blake Rayne) is meant to attend seminary school and become a preacher. But much to the chagrin of his adopted father, Ryan has an innate affinity and talent for rock and roll music. At the same time as Ryan is discovering his love for music, a young singer named Drexel Hemsley (Rayne again) — who happens to look and sound exactly like Ryan — begins taking the country by storm. Ryan doesn’t know he’s adopted and chalks up the resemblance as a coincidence. Either way, Drexel Hemsley’s success further inspires Ryan to follow his own musical dreams at the risk of disappointing Rev. Wade. (And at the risk of finding out the true nature of his parentage.)

Speaking of parentage, The Identical is directed by first-time filmmaker Dustin Marcellino, whose father (Yochanan Marcellino) and grandfather (Jerry Marcellino) were producers on this film. Jerry and Yochanan are largely responsible for the film’s many songs, which are spot-on facsimiles of 1950s rock and roll hits and Elvis Presley’s own catalog. (This includes everything from the King’s love ballads to his more frivolous beach movie songs.) Unfortunately, there’s not much else the film gets right.

Rayne — a real-life Elvis impersonator — was clearly cast mostly for his physical resemblance to Presley than for any sort of discernible acting talent. He’s not able to command the screen, even when he’s center stage during musical numbers. (Rayne is an Elvis impersonator playing a character who looks like another character that isn’t even officially Presley; no wonder his performance feels like someone made a copy of a copy of a copy…)

The novice lead actor is supported by some established talent, but none of them are able to elevate the schmaltzy material. Liotta fares the best and looks relieved to not be playing another psychopath/scary character. (The most fear Rev. Wade strikes in anyone is a stern look of disapproval.) Judd, on the other hand, is thoroughly wasted in the nothing role of supportive mother/wife. The film also features Seth Green (as Ryan’s best friend Dino) and Joe Pantoliano (as Ryan’s car mechanic boss) playing characters who support Ryan’s musical ambitions. Each actor, however, simply brings a watered down version of their established screen personas.

The problems don’t end with wooden acting and stilted writing. The movie alternates between jarring time jumps (Liotta’s old-age makeup doesn’t help matters) and segments of the film that dwell on events that simply aren’t that interesting. Ryan eventually enters an Drexel Hemsley sing-a-like contest and embarks on a career as a Drexel impersonator. The problem is this portion of the film resembles every other musical biopic ever made — you’re not gonna believe this, but Ryan’s manager turns out to be shady and cruel — except with much lower dramatic stakes, considering that Ryan is merely aping a bigger star. There are also odd, head-scratching choices, like having the film be narrated by Jenny (Erin Cottrell), the girl Ryan meets and falls in love with. That would make sense if the movie were just about Ryan and Jenny’s relationship, but Jenny inexplicably serves as the narrator from the very beginning of Ryan’s life.

I’m thinking maybe the director’s very first movie shouldn’t have been a high-concept rock musical that spans five decades and frugally brushes up against the mythology of one of the biggest cultural icons of the 20th century. In the end, the movie’s worthwhile message about having the faith to follow one’s dreams gets crushed under the weight of a filmmaker who seems to have bitten off more than he could chew.

The Identical is presented in an aspect ratio of 2.40:1. The 1080p image is arrived at with an AVC MPEG-4 codec at an average of 26 mbps. The video presentation makes a nice first impression right off the bat with a resplendent, panoramic shot of cotton fields before the action flashes back to the B&W of the Great Depression. It’s that warm palette that serves as the film’s baseline, and the Blu-ray shows off the slight variations in softness and color tones that denote different decades. (For example, Ryan’s childhood had a slight sepia tenor to it than brasher, more colorful scenes when he indulges in his secular music.) Black levels are deep, at least judging by Ryan/Rayne’s jet-black hair, though other interior scenes appear a bit muddled. The aforementioned B&W sequences left plenty to be desired in terms of sharpness and contrast, but they’re a relatively small part of the film. Not a show-off title by any means, but certainly gets the job done.

The DTS-HD Master Audio 5.1 track mostly makes the musical sequences feel like an all-consuming experience. Personally, I prefer more separation and dynamic detail in the rear speakers — rather than simply echoing the instruments from the front — but it still made for a reasonably immersive sonic experience during any concert scene. The rears do provide some occasional outdoor ambient noises, but those are few and far between. Dialogue is clear and intelligible at all times, and the vocals during the songs play well with the rest of the music.

The Making of The Identical: (20:35) Director Dustin Marcellino describes how making this modest drama was a startlingly huge undertaking. On top of having 35 original songs written and produced for the soundtrack, Marcellino talks about having only 35 days to film a decades-spanning movie that should’ve taken closer to five months to make. There are also a lot more visual effects shots in the film than people realize. (Not to mention a bananas sequence involving the wholly unnecessary use of an animatronic baby…that ended up getting cut from the film in the end.)

Behind the Scenes with Cast Commentary: (14:43) Liotta, Rayne, Green, and others discuss what attracted them to the project. Rayne could obviously relate to a character who bears a strong resemblance to rock and roll royalty, while Liotta’s role prompted him to read the Bible for the first time.

The Music of The Identical: (5:32) Jerry Marcellino — a Motown producer who worked with the likes of Michael Jackson and Diana Ross, and also happens to be the director’s grandfather — spearheaded the creation of the film’s music. The songs — easily the best thing about the movie, —convincingly mimic the sounds of rock and roll from the 1950s, ’60s, and ’70s.

Zaxby’s Promotional Video: (4:03) This delightfully bizarre clip features Rayne showing up at a racetrack and impressing NASCAR driver John Wes Townley with his skills. The video promotes Zaxby’s as much as it plugs The Identical; given the film’s dismal box office performance, here’s hoping the chicken chain got more bang for its buck.

Deleted Scenes: (15:56) There are 10 scenes in all, including a quicker, clever transition from Ryan’s childhood to strapping Elvis-esque young adulthood. There’s also that infamous animatronic baby rearing its freakishly robotic head. Features a Play All option.

The Identical bombed upon arriving in theaters. The film couldn’t attract the faith-based audiences that buoyed hits like Son of God, Heaven is For Real, and God’s Not Dead last year. None of those movies are what you’d call critical darlings, so the idea that The Identical flopped simply because it wasn’t very good doesn’t hold much water.

The Blu-ray, which has at least one interesting behind-the-scenes featurette, gives the film another shot to find an audience. Unfortunately, I can’t recommend you run out and grab this warmed-over, non-Elvis biopic/religious drama. (Unless you’re ironically watching it for so-bad-it’s-good reasons…and why wouldn’t you after reading the description in the last sentence?)