Posted in: Disc Reviews by Gino Sassani on January 22nd, 2015 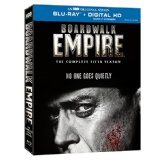 The final season of Boardwalk Empire breaks the mold of what the show has been for the first four years. The action jumps ahead several years to 1931. It’s a necessary plot point if we’re going to be ending the popular series in the fifth season. I understand the jump and why it works. I guess my only real question is: why are we jumping ahead to end what is one of the best shows on television? The answers likely lie within the powers that be at either HBO or the show’s production staff. There’s little point arguing the point. This is your last chance to get some Nucky… Nucky Thompson, that is.

The next change is in the presentation of the episodes. While there have been flashbacks before, they have been somewhat limited. This season finds us in a Godfather Part II scenario where we’re watching two timelines progress simultaneously. In the 1931 world we find that Nucky has grown tired of the gangster life. He’s in Cuba trying to broker a deal with Bacardi planning for the inevitable demise of prohibition and a chance to be a legit booze dealer. Old allies are seeing a weakness and begin to squeeze him out of all of his business affairs. We are watching the absolute decline of Nucky and his Boardwalk Empire. Nucky is a more contemplative character now. Less action, more thinking about the past, hence the many flashbacks.

The second story finds us back in Nucky’s childhood. He’s an awkward kid who isn’t as aggressive as the other kids and finds himself always in last place when it comes to the local pastime for kids: hustling a coin. Opportunity finally presents itself, and he finds himself under the mentorship of The Commodore (Conlee). This is the same man we saw at the end of his life in earlier seasons, played by the wonderful Dabney Coleman in those episodes. Here he’s the man in charge, and we find young Nucky using him to escape a poverty home and abusive father. This is where he learns the lessons that bring us to the scary dude we’ve known well these past five years.

Later we see Nucky as a teenager beginning to come into his own. Here he’s played by Marc Pickering. This was a brilliant piece of casting which should come as no surprise from the guys who brought us Steve Buscemi in the title role. He looks quite a bit like Buscemi, but the real magic is in the performance. He has the subtle movements of the character down cold. He’s great with the particular way Buscemi speaks in the role, parsing his words and phrases in such a way that I can absolutely hear Buscemi repeating them.

In the 1931 story we finally see those young famous gangsters take their places in history. Capone (Graham) is now the ruthless boss of Chicago, where Van Alden is now one of his right-hand guys. Michael Shannon is a great performer, but even at the end I never quite understood where the character actually fit in Nucky’s world. I always found him to be one of the few wasted resources of the series. Luciano (Piazza) and Meyer Lansky (Yusef) are also playing with the big dogs now and form the syndicate that’s taking over Nucky’s empire.

Most of the characters get good closure. Chalky White finds himself facing off with Narcisse and finding a way to free Daughter Maitland. Eli gets a rather emotional arc, and of course Nucky’s fate has to be met.

The series does have some wonderful sets. The Boardwalk set is absolutely stellar and just as much a character on the show as any of the supporting cast. The level of detail here is truly outstanding, and it has to be one of the greatest set pieces ever designed for a television show. Combine that with the costumes and cinematography, and you have a totally convincing period piece, to be sure. If you want to be completely and utterly whisked away to another time and place, this is the show you’ve been waiting for. I don’t think a single detail was left to chance. Scorsese left a solid template for the other directors to follow and set a standard I hope the series continues to honor.

When I was growing up, my grandparents took me to Atlantic City about once every summer. I remember the boardwalk and the piers. I saw the horse jumping from the Steel Pier and rode many of the attractions on the boardwalk. That was the 1960’s and 1970’s, so it wasn’t quite the same era at all. But there’s something about the essence of pre-casino Atlantic City that is captured here. The series is authentic if anything. They play a little bit with the timing of certain events and trivial pop references, but the show pulls you into a certain time and place. And isn’t that always just great fun?

Each is presented in its original aspect ratio of 1.78:1. The 1080p image is arrived at with an AVC MPEG-4 codec. The series is quite dark most of the time. Even the brighter exteriors on the boardwalk during the day are somewhat darker than you would expect. It’s a fine style point, and fortunately we get excellent black levels that allow the viewer to appreciate the subtle cinematography here. The high-definition image presentation is always flawless. Colors, while muted, put us firmly in the period. The detail might as well be considered bragging, because it highlights the incredible care of the production design. This is one of the last television shows to use actual film. It shows with a warmth and organic nature that only enhances the atmosphere.

The DTS-HD Master Audio 5.1 is pretty much what you would expect. There are moments where the action brings out an aggressive burst from the presentation. Mostly, however, it’s the dialog, and it works just fine here.

Advanced Viewing Modes allow you to pull up certain points of information and features during each episode.

There are Audio Commentary tracks on select episodes.

Scouting The Boardwalk: These short features attach to each episode and spotlight a particular location or set.

There’s already talk of a film with Martin Scorsese in the director’s chair. Without giving away any spoilers, the team itself reminds us that it would “obviously” need to be a prequel. I have to say they have really whetted my appetite for more of the younger Nucky. I certainly want to see Buscemi back, but there should be more of the Marc Pickering character. It wouldn’t hurt to see Harrow again, either. The five years were filled with some wonderful characters and moments. Ah, but, “What’s the sense of looking back, it never does any good.”

Gino Sassani is a member of the Southeastern Film Critic's Association (SEFCA). He is a film and television critic based in Tampa, Florida. He's also the Senior Editor here at Upcomingdiscs. Gino started reviewing films in the early 1990's as a segment of his local television show Focus. He's an award-winning recording artist for Omega Records. Gino is currently working on his 8th album Merchants & Mercenaries. Gino took over Upcomingdiscs Dec 1, 2008. He works out of a home theater he calls The Reel World. Favorite films: The Godfather, The Godfather Part II, The Body Snatcher (Val Lewton film with Karloff and Lugosi, not the pod people film), Unforgiven, Gladiator, The Lion King, Jaws, Son Of Frankenstein, The Good, The Bad And The Ugly, and Monsters, Inc.
Zodiac: Signs of the Apocalypse Heather McDonald: I Don’t Mean to Brag