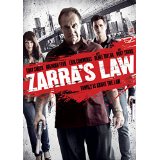 Justice or vengeance: how often the lines of the these two things become blurred. At what point does justice become vengeance, or when does it become warranted to take the law into your own hands? Zarra’s Law tells the story of two men who have lived their life coloring inside the lines, doing the right thing, only to see the murderer of someone they loved dearly walk free after a less-than-satisfying sentence. Retired cop Tony Zarra’s (Tony Sirico) life is frozen at the moment he witnessed his brother’s murder. Despite being on separate sides of the law (Tony being a cop and his brother being a member of the mob), Tony feels the loss of his brother so deeply that it he walks away from the job. Two years have gone by and he lives a stagnant life, working in the bar he owns and caring for pigeons that he keeps on the roof of his apartment building. Then something happens to jerk him out of his routine: the man he holds responsible for the death of his brother is about to be release from prison early. Outraged by this news, Tony reopens the case hoping to find damning evidence that will result in the man being back in prison.

He enlists the help of his recently returned nephew Gaetano (Brendan Fehr), a former soldier turned attorney. Gaetano has no love for his father and is too busy waging a one-man war against a childhood rival who, in addition to attempting to take over the streets, also terrorizes his wife and son. However, it is not long before his uncle research turns up new evidence into his father murder that reveals that the two men share a common enemy.

For a story that was supposedly about revenge, the idea appears to be second fiddle to everything else. There are a lot of moving parts with this story, and they take away focus from the premise. The revenge doesn’t seem to really come into play until the last twenty minutes of the story. Truth be told, I felt deceived by the whole thing. Here I was expecting to watch a film about a one man (make that two- man) war against the mob and found myself seeing anything but. The action doesn’t even play out until towards the end of the film. As I said, too many moving parts that took away from everything else. By my count there were at least three different storylines going on at once: You had Tony’s quest to find evidence to put away the man he held responsible for his brother’s death, then there was Gaetano’s war against the current king of the city as he tried to protect the man’s ex-wife and son from his wrath, not to mention Gaetano’s budding romance with a local bartender who turns out to be more than she appears. Those are just the prominent storylines; it’s enough to make your head spin.

Too much going on, that’s the only way to describe it. If it’s a story about revenge, that should’ve been the main focus. However, the main focus in the film appeared to be on Fehr’s character and his quest. In its defense, I will admit that this storyline did prove more interesting than the others. Fehr is a clear-cut good guy; however, he brings a charisma and charm to the deal that keeps the whole thing fresh.

I have a clear impression of what the film tried to do, and unfortunately it missed the mark by overcomplicating matters to the point that it became impossible to determine what the purpose of the story was in the first place. It should have been driven by one man’s quest for revenge; that should have been the focus point. If they had focused on that and his inner turmoil over being torn by his life spent doing the right thing and the all-consuming desire to seek revenge, it would have made for a far more interesting story.

Jeremy Butler is a film school graduate of the International Academy of Design and Technology. He is been writing for Upcomingdiscs since 2012; however, movies have played a big part of his life for much longer. Favorite genres include horror, science fiction/fantasy, and comedy. Favorite movies are V for Vendetta, Boondocks Saints, Kiss Kiss Bang Bang, and The Godfather.
Heather McDonald: I Don’t Mean to Brag The Kingdom of Dreams and Madness