Posted in: Disc Reviews by Jeremy Butler on January 25th, 2015 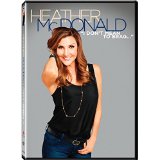 Soccer mom comedy, there’s a new one for me. I must say, not what I expected. I haven’t spent a lot of time devoted to the life and times of a soccer mom, but after Heather McDonald’s “I don’t mean to brag,” it is clearly more interesting than it seems. In this hour special she lays it all out for you, from breastfeeding (or more accurately non-breastfeeding) to her less-than-romantic sex life with her husband (to husbands everywhere, the expiration date of condoms is not a legitimate come-on). When it starts out, you may be thrown by the less-than-funny skit intro, but I assure you, there are a few things worth seeing.

McDonald’s style is funny; howeve,r the speed of her delivery makes following her act challenging. She is a fast-talking wild woman capable making the most boring things sound quite interesting, such as sleep apnea. Sleep apnea, as you know, is a serious affliction; however, under the guise of McDonald who speaks of the things she thinks about during her husband’s snoring fits, you can’t help but chuckle at it. Another anecdote that she wields skillfully is the perils of raising three boys and suffering from what she describes as daughter envy. And she does impressions, too. However, I have to say that her impressions leave something to be desired, meaning that they aren’t very good impressions, but I do believe that is the point; her impersonation of Aniston and Barrymore are more of a mockery rather than actual skill.

Though enjoyable, I was still left desiring more from the special. Comedy is best when it unfolds like a story. It doesn’t always have to be a long one; however, in my experience, if it is, it has a greater effect. McDonald’s special is simply an expression of her opinion on several subjects, merely a rant. Ranting is only as good as the subjects which you rant about, and though McDonald does pick subjects that are unique and interesting, the simple truth is there is only so long that a person can listen to another express their opinion before growing bored, and unfortunately that is essentially what happened for me around the half-way mark. I just think that had she slowed it down a bit, dug more into an in-depth tale, my interest would have been more peaked.

McDonald is sultry, quick-witted, and has decent comedic timing, the makings of true comedy, but the fast-paced delivery of her jokes will limit her audience. The rhythm and ease with which she glides through her routine makes it clear that it is not her first rodeo, and despite a less-than-interesting introduction about twerking, I highly doubt that this will be her last.

Jeremy Butler is a film school graduate of the International Academy of Design and Technology. He is been writing for Upcomingdiscs since 2012; however, movies have played a big part of his life for much longer. Favorite genres include horror, science fiction/fantasy, and comedy. Favorite movies are V for Vendetta, Boondocks Saints, Kiss Kiss Bang Bang, and The Godfather.
Boardwalk Empire: Season 5 (Blu-ray) Zarra’s Law