The Kingdom of Dreams and Madness 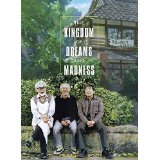 “Hello, please allow me to observe you working.”

A sign bearing those words hangs inside Studio Ghibli, the Japanese animation factory responsible for films like Grave of the Fireflies and My Neighbor Totoro. It’s one of many polite directives that adorn the airy workspace, but it also describes the mission of The Kingdom of Dreams and Madness. The movie gives fans an unprecedented look inside the world (and walls) of Studio Ghibli, and watching the creative process is alternately fascinating, frustrating, and exciting. However, the documentary also surprisingly turns out to be an elegy for a dying art form.

Writer/director Mami Sunada documented the inner workings of Studio Ghibli for about a year starting in the fall of 2012. During that time, the studio was producing two films: The Wind Rises, directed by legendary filmmaker Hayao Miyazaki (Castle in the Sky, Princess Mononoke, Spirited Away); and The Tale of the Princess Kaguya, directed by lesser-known, no-less-influential filmmaker Isao Takahata (Pom Poko, My Neighbors the Yamadas). The documentary largely tells the story of Studio Ghibli through those two men, along with pragmatic producer Toshio Suzuki, who announces his intention to release both The Wind Rises and The Tale of Princess Kaguya on July 20, 2013. (Back in 1988, Miyazaki’s Totoro and Takahata’s Fireflies were released on the same day.)

A different movie would’ve played up the rivalry between Miyazaki and Takahata, especially since Suzuki himself describes the two filmmakers as “friendly competitors” and Miyazaki seems to criticize his former mentor as much as he praises him. This documentary could have also focused on the race against time for Miyazaki and Takahata to complete what will likely be their final films, especially since we learn that Takahata has apparently never delivered a film on time or on budget. (You won’t be surprised to learn only one of the two films was able to hit that July 20, 2013 release date.)

Instead, The Kingdom of Dreams and Madness mostly ends up being an examination of Miyazaki’s organic, prickly filmmaking process and an extensive “Making of” for The Wind Rises. (We see everything from the casting of a non-actor — director Hideaki Anno — in the lead role, to Miyazaki wrestling with how to end the movie.) Part of this is by necessity: Takahata doesn’t even appear until there are about 15 minutes left in this 118 minute movie, which leads me to think he wasn’t eager to let cameras capture him at work. (Or he was *really* taking his sweet time with Princess Kaguya.) Fortunately, the gentle, contemplative nature of this documentary is a better match for Studio Ghibli’s own filmography than if this movie were a rote, point-by-point retrospective of the animation house’s output.

Plus, having a movie that extensively focuses on Miyazaki — who has earned deep admiration from the likes of Pixar/Disney Animation head honcho John Lassetter — is far from the worst thing in the world. A lot of the most amusing and affecting moments in the documentary belong to Miyazaki, whether he’s doing mandatory office calisthenics with one of his ever-present cigarettes nearby or he’s describing how painful and insignificant movie-making is in the grand scheme of things. (He actually says the words, “Filmmaking only brings suffering” and refers to his work as a “grand hobby.”)

The documentary spends an exorbitant amount of time detailing Miyazaki’s inexhaustible work ethic but stops well short of deifying the director. We get a few confessionals from beleaguered animators who have failed at doing the impossible: capturing what can only be seen in Miyazaki’s imagination. That seems to irk Miyazaki more than the slow, inevitable death of his particular hand-drawn medium, which he talks about with a mixture of resignation and practicality.

But by the time we get the full text of a letter Miyazaki sends to someone from his post World War II past, it feels like The Kingdom of Dreams and Madness has gotten a little too focused on one person. This is especially true when you consider all the fascinating figures that populate Studio Ghibli.

For example, I like the idea that Suzuki — nicknamed the “Detective” for his craftiness and attention to detail — might not-so-secretly be the brains and engine behind the whole operation. We also meet a young woman named Sankichi who is referred to as Miyazaki’s right-hand woman, except we’re not given a reason as to why she has earned this distinction other than the fact that she literally sits to his right when she is introduced. Then there’s Miyazaki’s son Goro, a director who has made two movies for Studio Ghibli. He only gets one quick scene, but Goro talks about the insecurity attached with working at the house his father had a very big hand in building. It felt like that could’ve been in its own movie.

In the end, The Kingdom of Dreams and Madness works because it shows how Studio Ghibli is like any other workplace — cramped work spaces, strategic staff meetings — while simultaneously capturing the things that make it extraordinary.