Frankenstein vs. The Mummy

Posted in: No Huddle by Brent Lorentson on February 12th, 2015 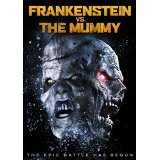 The days of Lon Chaney and Boris Karloff are long gone, but Hollywood refuses to give up on the classic monsters these men and others once brought to live on the big screen.  Despite how many years have passed since these monsters of the night first terrified audiences, filmgoers continue to fork over their cash to see these stories rehashed again and again. In the new release of Frankenstein vs The Mumny, we see the revival of two classic monsters and the opportunity to see them battle head to head.  Without the big budget to support this monster smackdown, is it still worth watching, or is this a battle that should have remained dead?

The film dives in on a modern take of the Mary Shelly story we are all more than familiar with. Now Professor Frankenstein (Max Rhyser) spends his days teaching at the local college, while his nights are spent in his lab trying to restore life to the dead.  Simultaneously at the same school an Egyptologist is studying the find of her career. After an excavation in Egypt, a newly discovered mummy is brought to the university.  This lovely Egyptologist is Naihla (Ashton Leigh), who seems to be also smitten with Professor Frankenstein.

Despite some of the clunky dialog, the courting between Frankenstein and Naihla actually works. I appreciate that time is actually spent with these two and giving us a relationship to develop, so when things inevitably go sour we can actually care.  Sure, more time could have been spent with Frankenstein creating his monster, but we mostly already know this story. What is followed is how a janitor is hired by the doctor to retrieve the freshest brain he can manage to get his hands on. Rather than simply raid the supply of bodies the medical school has on hand, the janitor decides to hunt for something fresher.

The most interesting direction of the film for me was with the story revolving around the mummy.  We get the usual about the body being cursed, and as the doctors poke and prod the mummy of course a curse is unleashed, and the soul of the mummy does what it can to control those tinkering with him, and with their blood and flesh it plans to restore itself.  One issue that jumped out at me is how when the mummy’s heart beats it seems those that are in the room can actually hear it; this was a bit much for me.  Yes, I know, if I’m willing to believe corpses can walk around and kill people, why is this a stretch?  Well, when Frankenstein believes his monster is alive, he uses a stethoscope to listen for a heartbeat, so either Dr. Frankenstein just isn’t blessed with the super-hearing gift, or the mummy has a superhuman heart that should prevent him from ever being able to sneak up on anyone (which he still does).

A saving grace for this film that could have been a make-or-break decision is the choice to use more practical effects for the film.  Not only do we get a man in full makeup to play the Mummy (Brandon deSpain) but also the Monster (Constantin Tripes) gets the prosthetic make over.  Unfortunately we don’t get to see the inevitable showdown between these heavyweight creatures until the final act of the film.  I don’t want to spoil anything, but I can’t help but feel a little let down by how short this “battle” turned out to be.

At the end of the day the film delivers more than you would expect. Don’t let the cover art fool you, just because the knee-jerk reaction may leave you thinking this is a poor quality attempt to cash in on the big name monsters.  OK, actually it is a cash grab by the filmmakers, but the film still manages to be fun while leaving the door open for a potential sequel which seems to be more commonplace than it should be these days.

Brent Lorentson is a horror writer and film critic based out of Tampa, Florida. With a BA in Digital Film, he co-wrote and co-directed Scavenger Hunt. His short stories have appeared in various horror anthologies. In 2019 his short script Fertile Blood will be a part of the anthology horror film Slumber Party. He is currently working on his first novel A Dark and Secret Place set to be released in late 2019. Favorite Films: Taxi Driver, Fight Club, I Saw the Devil, The Wild Bunch, Dawn of the Dead, A Clockwork Orange, Pulp Fiction, Heathers, The Monster Squad, and High Fidelity.
Poker Night (Blu-ray) Kingsman: The Secret Service