Posted in: The Reel World by Gino Sassani on February 13th, 2015 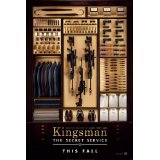 “Did you see the movie Trading Places?”

Well, this isn’t that movie. It can be as funny as Trading Places, though. There aren’t any shades of gray here either. It’s good old fashioned “good guys and evil genius” stuff all the way. It’s a thrill ride that we won’t have to wait in long lines to get on. This is like going to a summer movie and trudging through the snow to get there. Depending on where you live, of course. I’m talking about Kingsmen: The Secret Service.

Many years ago there was some buzz about the possibility of Quentin Tarantino directing a James Bond film. Of course, pretty much everyone in the business has been mentioned for a Bond gig over the years, and the buzz went no farther than that. Just buzz. Noise. That didn’t stop us from trying to picture what a Tarantino Bond epic might look like. Most of us got over it and moved on. Apparently Matthew Vaughn has been thinking about it for a lot longer than we have. So, if you really want to know what a Tarantino Bond film would look like, you’ve finally found your answer. It’s Kingsmen: The Secret Service. The answer is that it would be a hoot.

The whole concept starts with the graphic novel written by Kick-Ass scribe Mark Millar. Millar teamed up with Vaughn, of course, on the first Kick-Ass movie. It’s no coincidence that Kingsmen shares much of the twisted sense of humor found in that movie, only cranked up to 11 this time. Vaughn seems to get some of his best inspiration from the pages of comics. Adding his turn with The X-Men, comics make up a good bit of the films he’s directed. After just watching this latest movie I hope he stays with what works. Kick-Ass, X-Men: First Class and now Kingsmen is a pretty solid body of work. Can’t wait to see more.

Harry Hart (Firth) has a secret identity. He’s a spy with an organization working out of London but not connected directly with the government. This is not Her Majesty’s Secret Service. That doesn’t mean they don’t have just as many of the fun toys and gadgets. The front is a clothier by the same name. After all, a Kingsman is nothing if not finely attired. Just because a jacket is bullet-proof doesn’t mean it can’t be quite fashionable. The agents’ codenames adhere to the organization’s structure taken from King Arthur and the Knights of the Round Table. Harry is Galahad. The head man is, naturally, Arthur, while the Q-like tech guy is, of course, Merlin.

In a flashback we find Galahad in a tight spot where his partner is killed. He tries to console the widow and son by leaving them a medallion with a special number and a code phrase. It entitles them to one huge favor. The widow is not interested, and it’s the young boy who takes the medallion.

Cut to 17 years later. Mom’s hooked up with a thug who beats her. Eggsy (Egerton) is in a legal jam and remembers the free favor. Little does he know that he’ll be recruited to join the secret organization. He joins several other recruits each sponsored by other knights. It’s a bit of a harrowing training, and Eggsy finds himself a bit outclassed by the snobby students, with the exception of Roxy (Cookson) with whom he finds the closest thing to a friend.

While all of this is going on we are introduced to Valentine (Jackson). He’s the evil genius of the film. He’s giving away free sim cards that allow the user to join his communication networks for free. No more cell phone or internet bills. Who could resist, right? That’s the idea. And in a plot lifted from, of all places, Halloween: Season Of The Witch, it isn’t long before we realize he intends to use these cards to send a signal that drives everyone homicidal. It’s one of those planet-cleansing plots to wipe out a large part of the population. Meanwhile the select rich and powerful few get to watch it all from the safety of Valentine’s lair. What they don’t know is that the chips imbedded in their neck to protect them from the sim card signal can also be triggered to go boom if Valentine becomes displeased.

The movie pulls out all of the spy cliché’s here, as none of them are safe from this movie. It’s a spoof, but I hesitate to use that word. It hides its silliness and manages to hit these notes without ever really pushing the envelope too far. This is no Austin Powers where the tongue never leaves the cheek or pinky fingers never leave the mouth. Kingsmen doesn’t have to sink to toilet humor. Vaughn takes the humor out of the films it’s riffing. The film manages to rise above those obvious camp moments and be just as entertaining as the films it is trying to poke some fun at. I was quite surprised to discover how many film spy/action heroes have the initials JB. There’s even a nod to Maxwell Smart.

Fans of the camp will still get their fixes here. Samuel L. Jackson continues to dig into his tool box and bring out something we haven’t quite seen him do before. He’s absolutely delicious as the villain who wants to destroy the world but talks with an unusual lisp and is phobic of blood and violence. It doesn’t get much better than Jackson until you consider Colin Firth delivering the straight material in true Bond-suave fashion. He’s the backbone that keeps the film on track no matter how ridiculous things get. When he’s not at the helm, I have to give a huge amount of credit to newcomer Taron Egerton. I haven’t seen him before, but he’s got the looks of a young Matt Damon and the strut of a Johnny Depp. He goes from punk street kid to talented spy in the space of a single movie.

“Manners maketh man. Do you know what that means? Let me teach you a lesson.”

And Matthew Vaughn does just that. This is a lesson in how to spoof a genre and still deliver a thrill ride of a movie. Vaughn has a lot going for him here, and he uses everything to the hilt. There’s little fat or waste in this movie. He manages to deliver us into this world through the eyes of Eggsy without overloading his plot with worn-out origin story material. We’ve got us a franchise, and he trusted his story, actors and crew enough to catch us up without sparing the pace or energy of his movie. It’s hard to be clever when you have to wink so often, so Vaughn cuts out the winks and trusts the actors to deliver and the audience to get it. One of my biggest issues with Hollywood is how hard they think they have to hit me over the head with their message or concept. Vaughn always trusts you’ll get it, and get it you will.

There’s more than just spy movie gold here. You’ll find a ton of Men In Black going on. From the recruitment and how you get to the secret HQ you’ll be reminded of Tommy Lee Jones and Will Smith. There’s even a dart that makes people forget what they just saw. The massive bloodlets absolutely return us to classic Tarantino moments. In fact, they’ve gone one better. I’ll bet you Quentin is kicking himself right now that he hadn’t come up with the idea for a villainess with no legs walking on razor-sharp swords that deliver a lot of hurt when she’s in action. You might not be able to see her coming, but you certainly can hear her.

The opening credits are some of the coolest I have seen. You’ll love the way the titles come at you. I almost wish this one had been in 3D for moments like that. Maybe we weren’t wearing 3D glasses, but I want the glasses they’ve got in the movie.

That’s not to say there aren’t flaws. There’s a southern church scene where Valentine does a test run of his sim card signal. It goes on far too long and is the single most tiresome scene in the film. The head-popping finale goes on a little too long, and again it was a weak moment in the movie. To keep the rating they have there was little choice, and I understand what they were going for here. Still, I think it was one of those things that likely sounded better in production meetings than actually turned out on the screen. Finally, there’s a coda moment with a Scandinavian princess played by Hannah Alstrom that is completely out of place and doesn’t even appear to fit the atmosphere of the film. Yeah, I know what they were trying to do. I get the James Bond codas that have seemed to be missing from the Craig era. It just comes across quite awkward here. All in all, these are few complaints in what is the most entertaining film I’ve seen since summer.

With the options available for Valentine’s Day, this one is your best bet. Were you hoping to catch a steamy movie in the shade? There are puppies, however, so it has to be a great date movie, right?  On second thought… “This isn’t that kind of movie.”

Gino Sassani is a member of the Southeastern Film Critic's Association (SEFCA). He is a film and television critic based in Tampa, Florida. He's also the Senior Editor here at Upcomingdiscs. Gino started reviewing films in the early 1990's as a segment of his local television show Focus. He's an award-winning recording artist for Omega Records. Gino is currently working on his 8th album Merchants & Mercenaries. Gino took over Upcomingdiscs Dec 1, 2008. He works out of a home theater he calls The Reel World. Favorite films: The Godfather, The Godfather Part II, The Body Snatcher (Val Lewton film with Karloff and Lugosi, not the pod people film), Unforgiven, Gladiator, The Lion King, Jaws, Son Of Frankenstein, The Good, The Bad And The Ugly, and Monsters, Inc.
Frankenstein vs. The Mummy Fifty Shades Of Grey