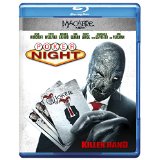 As far as I’m concerned, a filmmaker has to work pretty hard to screw up a poker game. (And for the record, I feel the same way about cinematic sniper fights and train heists.) It’s an inherently high-stakes situation that is both familiar and unpredictable, and in the hands of the right director a poker game can be either thrilling or funny. At various points, Poker Night manages to be both. But even though I certainly wouldn’t say writer/director Greg Francis screwed up this stylish horror-crime thriller, the movie is flush with flashbacks and subplots that distract from the really good stuff.

“Here’s a problem with wisdom: you only get it after you need it.”

The movie opens with rookie Detective Stan Jeter (Beau Mirchoff) bloodied and flat on his back in the middle of a patch of grass. We don’t exactly need the defeatist voice over narration and gallows humor to figure out that something very bad has happened to Det. Jeter. The film flashes back to reveal his abduction and subsequent torture by a masked lunatic who has also kidnapped Amy (Halston Sage), the teenage daughter of one of Jeter’s colleagues. During his imprisonment, Jeter recalls some of the stories told by veteran detectives at a recent poker night.

The card game is a tradition where the older cops (Ron Perlman, Giancarlo Esposito, Titus Welliver, Ron Eldard, Corey Large) regale the rookie with anecdotes from past cases that are meant to help out the younger detective if he ever gets in a tight spot. And Jeter’s predicament — being toyed with by a psychopath who loves using needles and Krazy Glue — certainly counts as a tight spot. Of course, each time one of the vets launches into one of his anecdotes, Poker Night flashes back yet again to bring their recollections to life.

“Only way to get wisdom out of my story is to look at it in hindsight.”

If you’re scoring at home, that means Poker Night uses flashbacks-within-flashbacks-within-flashbacks to tell its story. (Somewhere, Christopher Nolan’s nose started bleeding.) To be fair, Francis does a fair job of justifying the use of flashbacks by making the telling of stories the central conceit of his movie. The problem is the film goes overboard and becomes unnecessarily elaborate where it could’ve really been brutally efficient. The good news is a lot of the flashbacks — especially the ones involving the stories told at the poker game — are exceedingly clever and dynamic. (And the cheery ones flashing back to the masked killer’s family and work life are downright unsettling and hysterical.)

It’s no surprise that the scenes that really spark are the ones set at the titular Poker Night, since those sequences feature the best actors in the movie. Perlman (as the most badass of the bunch), Esposito (as the most measured), Eldard (as the most gregarious), Large (as the gimpiest), and Welliver (as the angriest; possibly because Jeter is secretly messing around with his daughter) are each strong character actors who lend the card game sequences a totally convincing chumminess. Perlman, as the grizzled lieutenant who previously saved Jeter’s life, is particularly imposing. In fact, he pretty much blocks out the sun whenever he’s on-screen with Mirchoff, who is a lightweight by comparison and (somewhat) by design. I get that Jeter purposely recedes into the background at the poker game, but even when the youngster is inserted into his colleagues’ anecdotes the actor doesn’t do much to jump off the screen.

Mirchoff’s most notable moments come when Jeter is being victimized during the sub-Saw scenes with the tricky masked killer. The killer has an eye-catching look and demeanor, but his motivations are likely to inspire a half-hearted shoulder shrug at most. More importantly, the only lesson Jeter really needed to learn was to not go anywhere without backup. (Although some of the older cops don’t seem to remember that one themselves.) There’s some decent misdirection — that leaves the door open for a sequel — but too much of this story thread is too absurd to take seriously. Like the rest of the movie, it’s a good idea, but the execution was too frenzied and a bit lacking.

Poker Night is presented in an aspect ratio of 2.35:1. The 1080p image is arrived at with an AVC MPEG-4 codec at an average of 25 mbps. Given the movie’s title, let’s consider the scenes set during the card game the movie’s clear, surprisingly warm baseline image. There’s a lot of going on here overall from a visual standpoint, including distinct changes in color, texture and tone to denote different time periods. The killer’s flashbacks, for example, have an exaggeratedly saturated look, while the jittery, action-heavy cop flashbacks have a good amount of color drained from the screen. Black levels are quite deep with solid separation, which is crucial given how much of the movie takes place at night or in the killer’s darkened lair. Close-ups feature strong detail — I’m thinking of the lines on the killer’s mask or Perlman’s face — even if it’s not quite extraordinary.

The DTS-HD Master Audio 5.1 track is aggressive from the start, probably too much so when you consider how eager the subs are to punctuate scene transitions or certain beats in Scott Glasgow’s generic thriller score. The aggressiveness, however, works in the track’s favor whenever gunfire has to explode off the speakers. The track also benefits from terrific separation that leaves the dialogue exclusively up front and lets the rears play with ambient and crowd noises.

Poker Night is a mess, but it’s often a witty, diverting one. There’s a pretty good movie buried in all the crime thriller clichés the filmmakers throw against the wall; some of them even stick without the aid of Krazy Glue.