Posted in: No Huddle by Jeremy Butler on February 12th, 2015 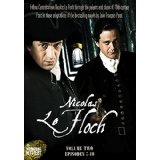 This being the first foreign series that I’ve covered for the site, I couldn’t be happier with the results. Knowing nothing about Nicolas Le Floch, I naturally had a few reservations about the series.  It wasn’t in English, so how was I intended to comprehend what the characters were saying (knew I should have taken French in college)? Being that I’m ignorant of the laws and traditions of their government, how difficult would it be to follow the storyline? Of course these reservations were in vain as the series proved its worth with great ease, displaying all the great characteristics of the mysteries I love.

Nicolas Le Floch is a charming, charismatic investigator who believes in thorough and complete investigations, as evident in “The Rogue’s Gallery” when his superior wants to announced the death of a wanted criminal without fully confirming the identity of their suspect. This was the episode where Le Floch had to square off against a particularly cunning opponent, a man who not only had a talent for seducing unwitting women but also outwitting key members of nobility as he moved among them without being suspected, that is until Le Floch, who remained the only person with suspicions.

For me this episode encompassed the best portion of the series, because it is the episode that brought me into the series; however, it was also the episode that answered all my question as to what the series had to offer. Before this one I did not know what format the show would take given that I was coming in at the middle. “The Rogue’s Gallery”, as it turns out, is not the first episode of the series, so naturally my mind registers that this is an established series. However, now I must consider the following: how will I fare following the story being as it seems I am being dropped in at the middle, will I be able to hold my head above water? As it turns out the answer to that question is yes, thankfully, the series is formatted in the standalone style, meaning that each episode tells a different story, giving each tale its own introduction, climax, and conclusion.

Going into more detail about what the series has to offer: Nicolas Le Floch provides an intriguing look into international mysteries of the past, a window into how investigators from a different era approached crime solving before modern forensics. There are still some scientific methods in the form of autopsy, but the show emphasizes the use of real detective work. Back then it required true intellect and patience, which the audience is treated to with Le Floch, who is not impulsive by any means, choosing to take his time and do the job right without shortcuts. Though “The Rogue’s Gallery” provides a great square-off between two intellects, it is in “The Rue Des Francs-Bourgeois Case” that a real mystery emerges as the case deals with the death of members of a noble family by poisoning. I must confess poisoning to be a more interesting death, because then as an audience member I found myself trying to work out for myself who was responsible. It’s thought-provoking and what keep in engrossed in the series.

As I said earlier, I had reservations going in, but none coming out as Nicolas Le Floch won me over by providing a glimpse into the past as well as some culture of another government’s laws and tradition that I had no knowledge of previously. I won’t claim to be an expert now, but I am far more knowledgeable now than before. It was definitely a mysterious series worth watching despite not being a native of the language; of course the subtitles helped a great deal.

Jeremy Butler is a film school graduate of the International Academy of Design and Technology. He is been writing for Upcomingdiscs since 2012; however, movies have played a big part of his life for much longer. Favorite genres include horror, science fiction/fantasy, and comedy. Favorite movies are V for Vendetta, Boondocks Saints, Kiss Kiss Bang Bang, and The Godfather.
101 Dalmatians: Diamond Edition (Blu-ray) Poker Night (Blu-ray)