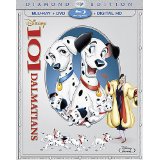 Athena here. That’s right, I’m the Siberian Husky that kind of runs things here at Gino’s house. Since I did such a great job doing the review on Snow Dogs, I decided to step in when I saw Gino watching yet another dog film. This time it was Walt Disney’s classic 101 Dalmatians. Naturally the film would have been better if it had been called 101 Siberian Huskies, but unfortunately the film was based on a popular children’s book by Dodie Smith who happened to have Dalmatians herself, so let’s not blame her; she didn’t know any better. Walt Disney himself discovered the story and took a personal interest in having it made into an animated film.

I’ve gotten to see a lot of these Disney classics, and the first thing that I noticed is the film was made in a dramatically different style than the previous Disney projects. The studio decided to abandon its smooth animation with fluid motion in exchange for a far more art-deco look. I don’t know about you humans, but this movie was a little harder on this doggie’s eyeballs. Lines jitter and move in such a way that there is always movement even if everything is standing still. You have to understand that this was not a studio getting cheap or failing in its own quality control. The animation style was a conscious choice by production head Bill Peet. Walt himself was publicly dissatisfied with the style. He was far more attached to the very fluid style his studio had become known for. The look had much to do with a new Xerox process that allowed the original artist drawings to, for the first time, be transferred directly to the transparent cel. This, of course, put a lot of artists out of work who used to do those transfers. The cruder character design was offset by a far more detailed background design. Using actual photographic plates of London locations, the animators created visually detailed backgrounds for the film. The movie is front-loaded with the credits in some clever dog-spot animation. It takes nearly four minutes to get to the story. Your human puppies might get a little impatient. By the way, look for Dodie Smith’s small credit size. It was the only thing she complained about in the film of her book.

Like all of the Disney films Gino’s let me watch over the years, I have to say this one sure has some great characters, even if none of them happen to be Huskies. The story is pretty much the one Dodie Smith created in her book. Roger (Wright) is a songwriter living with his Dalmatian Pongo (Taylor). Pongo knows that his “pet” has been working too hard and is a bit lonely for more human companionship when he spots Perdita (Bauer), another Dalmatian walking her “pet” Anita (Davis). He successfully gets the pair together, getting him a little doggie companionship of his own. Before long 15 puppies are born into the family. Sounds like “happily ever after time” to me until the horrid-looking Cruella DeVille (Gerson) thinks that all of these cute spotted puppies would make a nice fur coat. I don’t know about you humans, but I’m happy with my fur right where it is, thank you very much. Heck, I don’t even like it when my people start brushing and messing around with my stuff. Anyway… Cruella kidnaps not only these 15 puppies but 99 dogs in total from all across London. She knew better than to mess with any Siberian Huskies, or it would have been a short movie with a lot of yelling, and that spells B I T E. It’s up to Pongo and Perdita to rescue them before Cruella gets her new fancy threads.

While it’s true that everybody loves puppies and the movie has tons of cute, I think it has always been the diabolically evil Cruella that has made the film one that’s lasted almost 50 years; that’s over 300 in dog years, you know. All of the elements required for a truly memorable villain play out perfectly in Cruella. Her look is absolutely terrifying from her face to the green smoke that she blows from those nasty cigarettes. (Why do you humans do that anyway?) Her movements are matched by a splendidly villainous voice and perfectly timed accents from the soundtrack.  Glenn Close tried to match her in the 1996 live action version of the film, but I really don’t think that any human actor could match what Bill Peet created for the animated original.

101 Dalmatians is presented in its original aspect ratio of 1.33:1. The 1080p image is arrived at with an AVC MPEG-4 codec at an average 35 mbps. 101 Dalmatians is a Disney classic, and richly deserving of having a newly mastered release. Gino gets more excited about these things than I do, but I have to admit that the film looked pretty darn good here. It is presented in a full frame format. Gino did some checking, but it seems that was the original aspect ratio of the movie. There is a 1.75:1 ratio listed in some databases, but he assures me that is a matted version and not Disney’s original production. The colors were very good here. I like shiny things, so I was in love with the movie from the very beginning. Detail is so good that the stylish animation might appear more crude than was originally intended. There doesn’t seem to be any sign of print scratches or other problems you would expect in a film that’s over 300 years old. Every frame appears to have been handled with a lot of care. The people who did this deserve a lot of belly rubs for this job. The green smoky haze from Cruella’s cigarette is particularly bright and green. You can almost smell the nasty stuff. Of course, that could be because we dogs have such a better sense of smell. You have the option of the Disneyview which puts cel paintings in place of the pillar bars. I like them, but you have the option of displaying them or not.

The DTS-HD Master Audio 7.1 doesn’t take the new technology too far. This is one of those films that plays out just the way it needs to with its original mono mix. The little bit of stuff that came out of the rear speakers only served to distract this doggie, who by the way can hear a lot better than you humans can. We’re talkin’ just accents. You can hear every bark. I do have to warn you that some of the translations to human aren’t always accurate. Isn’t that the way with foreign language films?

There’s some brand new stuff to get your tail waggin’ but good.

The Further Adventures Of Thunderbolt: (1:46) This is a new very short cartoon adventure of the film puppies’ favorite television hero.

Lucky Dogs: (9:08) Surviving members of the old animation studio talk about how much fun it was to work there. Sounds like workin’ at the doggie park, and that spells F U N. There’s a lot of background on the movie here, too.

Dalmatians 101: (5:20) Cameron Bryce from the Disney Channel gives you his top five reasons this is the best dog movie ever.

Walt Disney Presents – The Best Doggone Dog In The World – 1961 Version: (51:05) This is an entire vintage episode of the television show. It shows some dogs from around the world and why they’re so special. Guess what? None of them were writing any reviews. Guess that makes me the real best doggone dog in the world, right?

From the DVD you have the following extras repeated here:

Redefining The Line – The Making Of 101 Dalmatians: This collection of short pieces can be played all at once, which is the way any smart Husky would do it. You get all kinds of information about the movie. The change in animation style is covered quite a bit. You’ll hear from humans who were on the staff of the movie as well as contemporary humans like Pixar’s Brad Bird who tell us how innovative the film was and how it influenced his decision to get into film animation.

Cruella DeVille – Drawn To Be Bad: (7:10). I’ve already mentioned how important the character was to the success and longevity of the film. Here you get about eight minutes of watching all of the elements necessary to bring the character to such evil life.

Sincerely Yours, Walt Disney: (12:49) Walt and Dodie Smith carried on quite a nice exchange of letters both before and after the release of the movie. This is a very nice feature that gives voice to the letters and provides background on what was going on during the exchange.

This is my second review about dog movies. Now, I don’t want to get pigeonholed here or nothing, but I know dogs. It looks like Walt Disney knew a little something about dogs too. The movie is a classic, and there’s a reason for it. And that spells F U N. This is one of those times you can gather around your own pups and share something you remember when you were a little puppy, no matter how long ago that was. These humans did a good job of making it look and sound good so that even your sophisticated home theatre stuff will appreciate it. Gino doesn’t let me around that stuff too much, but I sure am glad when a good dog movie comes around and he needs my help. So you have your family all together for the night. What else do you need? “Of course you have your little spotted friends.”

Parts of this review were written by Baby.