Posted in: The Reel World by Brent Lorentson on February 13th, 2015 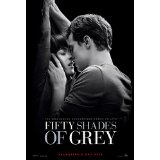 I hope you have your fuzzy cuffs ready. Not only is this weekend Valentine’s Day, but it is also the release of the highly anticipated film Fifty Shades of Grey.  It’s just about impossible to have not heard of the enormously successful book series that women across the globe have devoured and obsessed over since the books first hit the shelves.  It’s a phenomenon that has sparked interest in women to think of new and creative ways to spice things up in the bedroom.  On the other hand, since the announcement of the book being made for the big screen, men across the globe have dreaded the day that their wives and girlfriends would drag them to the theaters.  The excitement about this film with women is on par with ravenous frenzy that you see from most guys when we discuss such upcoming releases like Star Wars and Avengers 2.  After all the hype, does the film make audiences squirm with excitement and take up the crown as the raunchiest since 9 1/2 Weeks?

I went into the film knowing little to nothing about the books with the exception that the concept was originally written by El James as fan-fiction of the Twilight series.  I’m not the target audience, but even listening to friends discuss the book with me, I couldn’t help but feel mystified by the attraction for the story. After all, it seemed as though it was nothing more than a modern twist on the Harlequin romance.  The books have gotten women eager to explore their sexuality, which has led to a booming impact in the sex industry and S&M toys.  I couldn’t help but notice a report that mentioned that the fire departments are concerned about an upshot in emergency calls related towards couples planning to recreate scenes from the books and film over the weekend.  But I’m here to say that the hype is all for nothing more than a naughty version of Pretty Woman.

When Anastasia (Dakota Johnson) first meets billionaire Christian Grey (Jamie Dornan), it’s awkward and in some ways a sweet interaction as Anastasia stands in for her sick friend to do an interview with Christian.  She is painfully shy and nervous around Grey who seems to look at her, a wolf in a well-tailored suit; this interaction is only the beginning of the hunt for Grey as he goes on to pursue Anastasia.  The courtship between the two in the first act of the film feels more like a lighthearted rom-com despite how something always seems to be off about the way Grey seems to want to keep Anastasia at a distance.  Had the film continued to stick with this direction of simply being a guy having trouble opening up his emotions to Anastasia, the film would have been better, possibly, but definitely less provocative.

It is when we are introduced to Christian’s “play” room that things take a more severe turn with the introduction of the room and the contract Grey tries to get Anastasia to sign, allowing him to fully take advantage of her since her signing the contract would signify she surrenders herself to him.  Sure, Grey makes a tempting offer to Anastasia, offering her a new computer, her own room to stay in while she is with him, and eventually a new car, but with each reward Anastasia has to offer something of herself as well. As a viewer I can’t help but wonder how this could ever seem appealing.  As the film goes on and Grey’s obsession with Anastasia grows, all I see is a sexual predator hunting his prey, but because he is a billionaire, that makes everything OK.  Sure, this is supposed to be a fantasy, but  I simply can’t understand how women are getting worked up about Christian Grey when if he was your mailman or worked at McDonalds and did the same exact thing, women would slap a restraining order on the guy.

Looking past Grey’s actions, what is more frustrating is that when the film tries to explain his actions and why he is what he is, the explanation is never enough.  In fact, all the more engaging storylines in the film are not even explored in the film, like the mysterious Mrs. Robinson from Christian’s past and the various cigarette burns on his body.  But that doesn’t explain, either, why a guy who says he doesn’t ever “sleep” with anyone suddenly sleeps with Anastasia. Everything he claims to never do, we see him do the exact opposite.  I understand that’s what makes Anastasia different from the rest but we never see or get to understand why he is making these changes because of her.

Even looking past the ridiculous nature of the romance, let’s cut to the chase and delve into the “naughty” factor of the film.  Women have told me about how hot and sexy the sex scenes in the book are, and from what they described it could even make me blush.  Well, the film completely fails in this department.  The trailers tease at delivering the sexiest film in decades, but what we see on the screen, despite being beautifully shot, seems extremely neutered.  The film’s biggest selling point, and it doesn’t even make its way to the screen.  This is a film that needs to be sexually charged and intense to succeed, but it is so watered down that I can’t help but picture Adrian Lyne and Joe Eszterhas laughing at this film.

Furthermore, looking at the film I can’t help but wonder what kind of backlash the film would receive had the film been written and directed by men.  I’d imagine there would be claims of sexism had there been a gender swap behind the camera, because the way Anastasia is written in this film should be insulting.  Both Anastasia and her roommate are supposed to be intelligent young women, but with the appeal of a good-looking billionaire it seems common sense goes out the door.  This film was an opportunity to allow women to embrace their sexuality and be strong characters on the screen, but this is the film’s greatest failure.  There are two more books remaining in the series, and all I can hope for is that all the creative parties involved can look at their mistakes and make the changes needed to prevent having another stinker on their hands.

Brent Lorentson is a horror writer and film critic based out of Tampa, Florida. With a BA in Digital Film, he co-wrote and co-directed Scavenger Hunt. His short stories have appeared in various horror anthologies. In 2019 his short script Fertile Blood will be a part of the anthology horror film Slumber Party. He is currently working on his first novel A Dark and Secret Place set to be released in late 2019. Favorite Films: Taxi Driver, Fight Club, I Saw the Devil, The Wild Bunch, Dawn of the Dead, A Clockwork Orange, Pulp Fiction, Heathers, The Monster Squad, and High Fidelity.
Kingsman: The Secret Service Olive Kitteridge (Blu-ray)