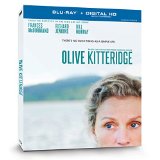 “Why are you so hateful, Olive?”

Olive Kitteridge — Elizabeth Strout’s Pulitzer Prize-winning novel —has been adapted into a four-hour HBO miniseries. It’s probably the best possible outcome for Strout’s story, which deals with the legacy of depression, along with several other box office-unfriendly themes that would almost certainly prevent any proper Kitteridge adaptation from sniffing a multiplex. The miniseries is well-made, and the acting is top-notch. The problem for me was that, even with that four-hour running time, we don’t get a ton of insight into why the title character is so hateful.

We meet an elderly Olive (Frances McDormand) as she takes a solitary walk into the woods with a blanket and a revolver. Before we find out what she does with those items, the action flashes back 25 years. Olive is a junior high schoolteacher in the fictional seaside town of Crosby, Maine, where she lives with husband Henry (Richard Jenkins), the town pharmacist. Olive and Henry have a young son named Christopher, but appear to be polar opposites. Whereas Henry is kind and chronically concerned about the well-being of others — particularly guileless, pretty young things like new employee Denise Thibodeau (Zoe Kazan) — Olive is a plain-speaking misanthrope who is quick with a withering putdown. Olive seems to make exceptions for a fellow teacher named Jim O’Casey (Peter Mullan), and anyone grappling with depression or some sort of mental health issue, like single mom Rachel Coulson (Rosemarie DeWitt), who has a son of her own around Christopher’s age.

Part 1/“Pharmacy” concludes with a key death, but most of Olive Kitteridge— with a couple of notable exceptions — are about the alternately frustrating and comforting parts of spending your life with someone. That includes both the reliability and jealousy that creeps in with regards to your partner, or the inescapable disappointment and concern with regards to your children. (John Gallagher Jr. plays Christopher as an adult.) Christopher is in therapy and we learn early on that Olive’s bipolar father shot himself. We eventually meet Rachel’s son Kevin as a college student (played by Gotham‘s Cory Michael Smith), and learn he may have inherited some of his mother’s mental issues. So the idea of depression being passed down — one way or another — from one generation to the next permeates the story.

Again, not exactly the stuff Hollywood studios are eager to throw millions of dollars at. Director Lisa Cholodenko previously explored some nature vs. nurture themes in her best-known movie, The Kids Are All Right. Considering Olive’s perpetually salty demeanor, it’s more like “nature vs. lack-of-nurture” in Kitteridge. It’s one thing to take on a suffer-no-fools attitude with harmless twits like Denise (Kazan makes for a tremendous mouse of a girl) or other people outside the family, but Olive’s attitude toward Henry and Christopher in this miniseries seems to constantly walk the line between tough love and cruelty.

And as great of an actress as McDormand is — playing the temperamental inverse of her most famous role — she’s not quite good enough to convince me that Henry would’ve fallen for someone as consistently nasty as Olive. (I do, on the other hand, believe that Henry could *stay* with someone like that, thanks to Jenkins’ warm, sappy-in-every-sense-of-the-word performance. In other words, Henry’s eye might wander, but he’s too nice of a guy to leave.) The problem is there’s no hint — neither in the story, nor in Emmy-winner Jane Anderson’s script — that there was ever a softer version of Olive for Henry to fall in love with. Olive and Henry occasionally joke together, but those moments — along with an early sex scene — are more jarring than believable.

Speaking of jarring, there are a couple of key sequences that feel either hurried (a violent robbery at a hospital in Part 3/“A Different Road”) or clumsily-handled (a hunting accident in Part 1) despite the four-hour running time. The final 30 minutes of the miniseries — when Bill Murray finally gets something substantial to do as a sad-sack kindred spirit of Olive’s — also feel like they could’ve had a little more time to breathe and develop.

Fortunately, Olive Kitteridge excels at portraying some of the emotional beats that are toughest to depict on screen. I’m talking about the lack of dignity that can come with getting older. Part 4/“Security” has an effective, extended interlude with Olive visiting Christopher and his new family in New York City, and we see all the awkwardness, resentment, and false cheer that comes along with it. That being said, my favorite installment was probably Part 2/“Incoming Tide” because it encompassed the best parts of the miniseries.

Part 2 deals with the idea of inheriting depression in the most direct way, yet it also features the most picturesque scenery. (Henry is always telling his customers to turn on a light or otherwise brighten their lives rather than relying on medication, which seems like an odd thing for a pharmacist to say.) It also features the miniseries’ funniest moments as Olive terrorizes and alienates almost everyone at Christopher’s wedding.

Olive Kitteridge is certainly worthy of admiration, both as a highly-competent production and for tackling a subject a lot of filmmakers would shy away from. But, like its prickly title character, this miniseries is willfully hard to love.

Olive Kitteridge is presented in an aspect ratio of 1.78:1. The 1080p image is arrived at with an AVC MPEG-4 codec at an average of 20 mbps. The visual presentation impresses right off the bat by providing an exquisite amount of fine detail during the handsome opening credits. (Which are heavy on close-ups.) The overall palette shifts in subtle ways depending on the time period. Scenes that take place in the past seem to be slightly drained of color, which is actually a good match for the coastal setting. The color we do get — most notably in the Kitteridge’s garden and during Christopher’s wedding — comes off looking rich, and sumptuous. Black levels are deep, and contrast is on-point. Overall, this is an appealing blemish-free image that matches its Northeastern base: sunny with a chill.

The DTS-HD Master Audio 5.1 track is alive and bursting with activity starting with Olive’s opening stroll into the woods. Sub activity is negligible, but rear speakers are constantly chirping out bird sounds, crashing waves, or city traffic when Olive visits Christopher in NYC. It’s not just white noise either; there’s good, cross-channel directionality. Dialogue is clear, which helps along everyone’s New England accent. Carter Burwell’s piano-driven score feels lush and has the appropriate heft. In all, this Blu-ray offers an immersive, nuanced track.

The Blu-ray includes all four parts on two discs. The total lack of special features is disappointing, even though HBO doesn’t have a great track record of putting out a bunch of bonus material with its miniseries. On the other hand, the characteristically top-shelf A/V qualities on this release — par for the course for HBO productions — mostly make up for that slight deficiency.

Olive Kitteridge doesn’t have the buzz or mass appeal of other HBO miniseries, and it can be a little hard to get into. However, it’s definitely worth a look for the performances and the scenery alone, even if it personally left me a little cold.