Dying of the Light (Blu-ray)

Posted in: Disc Reviews by Brent Lorentson on February 23rd, 2015 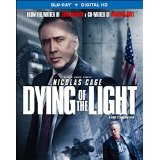 Sometimes in film the drama behind the scenes can be more interesting than the actual film we see up on the big screen. For writer/director Paul Schrader, having drama behind the scenes that effects the final project that we get to see is something he is more familiar with than he’d care to admit to.  The firestorm that occurred with the release of 2005’s Dominion: The Prequel to the Exorcist became so intense that the studio insisted upon a new director to come in and do extensive reshoots that subsequently led to the release of a separate film directed by Renny Harlin.  Once shooting wrapped for Dying of the Light, almost a decade later Schrader found himself in the same position where the producers took the film away from him only to release a cut of the film that Schrader seems to have disowned.

When you have the credits to writing films like Taxi Driver, co-writing Raging Bull, Rolling Thunder, and Affliction, you would imagine some respect would be paid to the man.  When you even have the cast standing in support to their director wearing shirts and your cast and crew has virtually disowned the film, as a critic and a fan, feelings do have to be separated as I go in to review this project.

No time is wasted in setting up the story.  EvanLake (Nicolas Cage), an agent with the CIA, is given a bleak diagnosis that suggests that his memory is failing at an aggressive pace.  His condition forces him into retirement, but before Lake is ready to hang up his career he has some unfinished business to settle with a terrorist who is rumored to have been dead for over two decades, only Lake believes differently.  Lake calls in a favor to another agent, Milton Schultz (Anton Yelchin), a hungry young agent who also believes that the suspected terrorist is still alive.

The biggest issue with the film as it is is that it is far too easy for our two leads to stumble across the terrorist once again.  For a terrorist who has been in hiding for two decades and whose health is rapidly declining, how is it the government could let this man survive under the radar for so long?

Clearly the producers wanted to release an action thriller with no intentions of caring about story, because there is simply no story to be seen here.  A simple one-line synopsis is all it takes.  The deleted scenes come to about 23 minutes in total, and all that is story and subtext that not only would have given the film depth but also would have given us enough character development to care about where this thread of storytelling is leading us.

What works, though, is that it seems Cage is still more than willing to give a solid performance despite the track record we have seen from him lately.  Sure, working with an accomplished writer and director helps, but it seems we get a bit of a spark in this performance that has been missing for more than a few years.  This is a film about a man coming to terms with his age and condition and wanting to fix the past before it is too late and he is told he is too old to either succeed in his mission or do anything that would matter.  From the opening act of the film to seeing Cage adjust as his mind and body fails on him is a performance worth checking out, and the deleted scenes offer more richness to the part.

As the film wraps up, what is most notably missing rests in the film’s ending.  Instead of a bleak or ambivalent ending that we are used to seeing in Schrader’s films, we get the traditional by-the-book conclusion that is simply unsatisfying and is beyond anticlimactic. Considering both our antagonist and protagonist have serious health issues that are borderline debilitating, when the two meet it seems to play out in a way that just wasn’t as profound as it could have been.  I’m not looking for a twist ending, but when you have a film that is about nothing more than a man’s journey towards defeating an enemy that has plagued him for so many years and is his driving force to go on day to day, well, this confrontation should leave more of an impact, when instead it offers a shrug of ambivalence.

Dying of the Light is presented in an aspect ratio of 2.35:1. The 1080p image is arrived at with an AVC MPEG-4 codec at an average of 20 mbps.  Despite having a sharp image with only a few moments of noise in some low light shots, the color palette is a bit boring.  Sure, we get the blues for when it’s supposed to be cold or at night.  And when it’s warm or outdoors during the day, we get warmer yellow and gold colors.  Very little saturation or manipulation of the colors are used here, and it results in a flat and unremarkable image.  The cinematographer commented about how he was removed from the editing process so we never got to see the look that was intended to be tinkered with in post, so I attribute the less-than-impressive look to be caused by this.

The DTS Master Audio 5.0 track is a bit underwhelming as well.  Despite this being a “spy thriller” there is very little action, so we don’t get to see the dynamic sound range put to the test here.  The dialog is crisp throughout, but there is very little to impress or remark upon.

Behind the Scenes of Dying of the Light: (14:27) Your standard behind-the-scenes with interviews with the cast and director that seems to have been done during the actual production of the film.

Deleted Scenes (23:40) Here we get numerous scenes that would have added depth to the film.  Hopefully at some point we will get a new cut of the film and see the film as it was meant to be seen.

Interviews:  A series of brief interviews with Schrader and the cast.  Each runs only a couple minutes and offers nothing new beyond what we saw in the behind-the-scenes featurette.

If you are going into this hoping for an intense gritty drama filled with great characterization, well, get ready to be disappointed, because this is not that film.  Instead we get a rehash of the typical spy films that only find a home on straight-to-video shelves and usually work better as a coaster than a film to enjoy with some friends.  It’s not awful, but it is a far cry from what this could have been.

Brent Lorentson is a horror writer and film critic based out of Tampa, Florida. With a BA in Digital Film, he co-wrote and co-directed Scavenger Hunt. His short stories have appeared in various horror anthologies. In 2019 his short script Fertile Blood will be a part of the anthology horror film Slumber Party. He is currently working on his first novel A Dark and Secret Place set to be released in late 2019. Favorite Films: Taxi Driver, Fight Club, I Saw the Devil, The Wild Bunch, Dawn of the Dead, A Clockwork Orange, Pulp Fiction, Heathers, The Monster Squad, and High Fidelity.
Exclusive Interview With Fiona Dourif From Fear Clinic Exclusive Interview With Director Jesse Baget & Producer Steven Barton Of Zombieworld