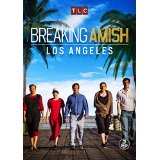 When Stephen King wrote The Running Man back in 1982, he might very well have been looking through a crystal ball at the television landscape of the 21st century. While we haven’t started executing criminals in game-show fashion …yet … reality television has had a huge impact on our pop culture. From Big Brother to Survivor, Americans continue to get their kicks watching attention-needy “contestants” engage in silly little dramas and the occasional shoving match. Maybe we should blame it all on Jerry Springer. One of the latest reality shows to come along has been  Breaking Amish. That show was soon followed by Breaking Amish: Los Angeles. Both are no longer on the air, and after spending a season with Breaking Amish Los Angeles, I can’t say I’m at all surprised.

The idea appears to be a simple one. Young Amish folks are offered a chance to try the “English” (it’s what they call the rest of us) lifestyle. They are taken to LA where they live together and experience all of those things that are taboo in their own cultures. They risk being shunned when they return, but they go along with the idea. Now here’s where the show differs from any other reality series I’ve seen to date. Usually there is some competition or elimination process with some kind of a prize or goal at the end of the show. That’s not the case here. When it starts we don’t even know how long they are to do this, and “contestants” appear to come and go in the house. There is no cash or apprentices awaiting a winner. A couple of the participants do get to meet people in a field they wish to pursue, but it’s a dropped thread that doesn’t really lead anywhere for either. No one gets voted out, although a couple are asked to leave at different times, only one being permanent.

The show starts with five members. There’s Betsy, a married girl who takes off without even talking to her husband, whom we never meet. She leaves him a note and splits. She’s also apparently a witch, something that gets her a lot of attention with the others. She talks about demons, hexes and spells, which I’m guessing isn’t really a part of the Amish culture. Iva is the flirtatious, pretty girl who has odd mood shifts. She causes trouble when she engages in a threesome and tries to have Betsy arrested for sexual assault by lying about the encounter when it embarrasses her. You see, she has a boyfriend back home who shows up in the middle of the season to live with the group. Lizzie is trying to hide a pregnancy both from her community and the other residents of the house. Her brother Samuel arrives to “protect” his sister but stays and gets in just as much trouble as the rest of them. Andrew is an ex-con who arrives mid-show and stirs up some trouble of his own. Devon’s the troublemaker with the “who me?” look. Finally there’s Matt, who starts out by trying to lay down house rules he calls the 10 CoMattments. Really?

Needless to say, the show is nothing but constant drama. The subjects themselves get pretty old. They are either fighting about the aftermath of the threesome or Betsy’s witchcraft moments. It’s so obvious that all of them are starving for attention from their culture that minimizes individualism to a point where you’re not supposed to wear red and dolls’ faces can’t contain features. The rest of the time we see them succumb to various temptations like booze and strip clubs. The truth is that none of these folks require that much of a push into anything that they do. There’s obvious manipulation by the show people, but we never see them, and there is no host to the events. When it ends it ends just because they decide it’s time to go home and decide what to do with themselves.

Even reality show drama junkies will have a hard time staying with this show. It runs rather aimlessly, and the participants appear less real than most of these shows. Combine that with a lack of structure or mission and you have a show that is very hard to watch more than an episode or two. There’s also far more repetition here, and I felt like I was often watching the same episode over and over again. It’s just bad television all around.

I grew up in Eastern Pennsylvania. Horses and buggies on the highways and roads was nothing strange to me growing up. We met many Amish people at farmer’s markets and other businesses where their produce and crafts could be found for sale. I can tell you that none of the people on this show are at all representative of that community. These are people already predisposed to succumb to the temptations they do here. It’s easy to walk away from this show with some negative feelings toward the Amish culture and a real image of hypocrisy within their faith. But that’s not a true picture at all. This might well be one of the most unrealistic “reality” shows I’ve seen. These guys drop F-bombs more than Samuel Jackson. Trust me when I tell you they didn’t learn that down on the farm in Lancaster. They aren’t only bad Amish, they’re just bad people in general. There’s really only one way to treat this nightmare of a series. “Shunning.“

Gino Sassani is a member of the Southeastern Film Critic's Association (SEFCA). He is a film and television critic based in Tampa, Florida. He's also the Senior Editor here at Upcomingdiscs. Gino started reviewing films in the early 1990's as a segment of his local television show Focus. He's an award-winning recording artist for Omega Records. Gino is currently working on his 8th album Merchants & Mercenaries. Gino took over Upcomingdiscs Dec 1, 2008. He works out of a home theater he calls The Reel World. Favorite films: The Godfather, The Godfather Part II, The Body Snatcher (Val Lewton film with Karloff and Lugosi, not the pod people film), Unforgiven, Gladiator, The Lion King, Jaws, Son Of Frankenstein, The Good, The Bad And The Ugly, and Monsters, Inc.
Outlander: Season One, Volume One Chappie