Posted in: The Reel World by Brent Lorentson on March 6th, 2015 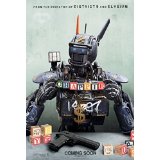 Despite the twinge of disappointment I felt as I exited the theater after seeing Elysium, I still believed writer/director Neill Blomkamp was more than a one-trick pony with District 9. Now two years after the release of Elysium, Blomkamp is set to release Chappie, a sentient-robot film that from the trailers evokes comparisons to Robocop and Short Circuit, which could mean either that could be a hit or another disappointment.  A disappointment could be trouble for Blomkamp. After all, his concept images and storyline for an Alien sequel has relit excitement for a franchise that many had felt died after the third entry.  I look at Blomkamp’s film and feel he is what the sci-fi genre has needed, a creative party who isn’t making films just because he can. Blomkamp is a fresh voice that the genre has desperately needed.  A voice that is willing to tackle social issues but entertain the masses at the same time.  When it comes to Chappie, despite my concern, despite all the naysayers, Blomkamp has made a film that takes many risks, and he comes so close to knocking it out of the park.

Chappie takes us into a world where the days of human police officers working the street has become a thing of the past.  It’s an experiment we’ve seen explored before, and most will think about Robocop in many of the early scenes.  As I watched, I couldn’t help thinking, was this nothing more than an attempt on Blomkamp’s part to show he should have been the one to helm the Robocop remake?  We even get a glimpse of another robot that is being designed by a mullet-brandishing Hugh Jackman that looks just like the ED-209, only this version is called the Moose.  But I’m getting ahead of myself.

When we first meet Chappie, he is nothing more than simply #22, a faulty robot that is ready to be destroyed following an accident that resulted in his battery pack being melted to the point it cannot be replaced.  His maker, Deon (Dev Patel) is working on a program that could allow the robots the ability to think for themselves, but he needs a robot to test the product on.  Going behind his boss, Michelle Bradley (Sigourney Weaver, who is sadly under used in the role), Deon steals 22 to test out his program.  Too bad for Deon a group of thugs have other plans and steal 22. The thugs (Ninja and Yo-Landi, who seem to be playing themselves sort of; they are members of the South African rap group Die Antwoord) have one week to pay a rival gang leader, and Ninja plans to have 22 help him.

The problem for Ninja and his gang is that the program loaded into 22, though it works, starts the robot off at an infant-like state, and he has to learn everything just as a child would.  Yo-Landi seems to immediately take to having to be the role of mother, and it is here where Chappie is “formally” named.  What follows is what I couldn’t help but see is Blomkamp’s way of showing how bad parenting can create a criminal and that after all no child is ever born a criminal; it is all learned behavior.  The life of crime isn’t what Deon wants for Chappie, but it is out of his hands.

The tough life lessons we see Chappie endure are cruel and even heartbreaking at times. It is so easy to forget that Chappie is simply a CGI creation, and that in large part is due to the performance of Sharlto Copley.  From District 9 and Elysium we’ve seen him play the good guy as well as a ruthless villain, but in the role of Chappie he inhabits this role in such a way with motion capture that rivals the work of Andy Serkis.  Copley brings life to this robot, and sure, at times he may be silly and over the top like Jar Jar was in the early Star Wars : The Phantom Menace, but that’s the point.  When watching this, yeah, it’s funny seeing a robot stealing cars and getting into shootouts, but what you have to keep in mind is that this robot is still only a child that has been thrust into this violent world.  Even more impressive is how Copley tackles the emotions of when Chappie realizes that one day, and soon, he will die.  It’s a scene that most parents will connect with, as it is a moment all parents at one time have to face when their child first learns about death.

Just as he did with District 9, Blomkamp returns to Johannesburg to shoot the film.  The imagery of the slums in contrast to the high-tech machinery of the robots is indeed effective, and in a sequence where Chappie is left to fend for himself in the slums, it doesn’t take much to express the threat he is under to the audience.  The most provocative choice, though, is the music selection. A mix between the South African gangster rap of Die Artwoord and the score composed by Hans Zimmer is a blend that helps suck you in.  Zimmer’s score is as on par with what he accomplished with The Dark Knight and is a nice contrast from the profanity-laden rap tracks.

Chappie is a film that has so much heart and is such a blast to watch that it is a shame the R rating is going to prevent it from reaching a younger audience, because to me this IS a kids’ film.  Look past all the profanity, and parents be warned there is a lot of it, but beyond the bad language this film has just as much heart and is something kids can connect to as much as ET.

Before too many people lose their minds over that comment, no, I’m not saying the film is a classic in the making, but it comes so close.  In its favor, the film simply doesn’t have a wasted moment, as every scene drives the story.  Sadly there is so much talent that is underused between Weaver and Jackman, who are basically watered down to one-dimensional roles, whereas the juicier parts are set aside for Ninja and Yo-Landi. Unfortunately Ninja and Yo-Landi are for the most part unlikeable.  It’s one thing to have unlikeable lead characters, but so much of the film hangs on their performances, and unfortunately they just don’t have the experience to make these roles as memorable as they could have been.

I went in with uncertain expectations, and I came out of the film with a reaffirmed appreciation of a director who is willing to take risks that so many directors shy away from.  Forget about Terminator or # 5, Chappie is the robot with heart film geeks have been waiting for.  Exiting the theater, I’m not just excited about what Blomkamp will do with the Alien franchise, but I’m ready to see what he will continue to do for the genre that has been missing a unique voice for far too long.

Brent Lorentson is a horror writer and film critic based out of Tampa, Florida. With a BA in Digital Film, he co-wrote and co-directed Scavenger Hunt. His short stories have appeared in various horror anthologies. In 2019 his short script Fertile Blood will be a part of the anthology horror film Slumber Party. He is currently working on his first novel A Dark and Secret Place set to be released in late 2019. Favorite Films: Taxi Driver, Fight Club, I Saw the Devil, The Wild Bunch, Dawn of the Dead, A Clockwork Orange, Pulp Fiction, Heathers, The Monster Squad, and High Fidelity.
Breaking Amish Los Angeles: Season 1 Unfinished Business