Outlander: Season One, Volume One 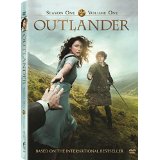 “There’s no place on Earth with more magic and superstition mixed into its daily life than the Scottish Highlands.”

To build its slate of original programming, Starz has largely decided to look to the past. In recent years, the premium cable network has produced shows like Da Vinci’s Demons, The White Queen, and Black Sails, each of them (loosely) historical dramas with varying amounts of nudity sprinkled in. But it took a trip to the Scottish Highlands — and to the 18th century — for the channel to find its biggest hit to date.

“It was a Tuesday afternoon, six months after the end of the war…”

Outlander is the story of Claire Randall (Caitriona Balfe), a kind, tough-minded British combat nurse during World War II. Shortly after V-E Day, she is reunited with her husband Frank (Tobias Menzies), a history buff who served as an intelligence officer during the war and is slated to become a professor at Oxford. But first, the couple decides to take a trip to Inverness, Scotland so they can re-connect after being separated for five years during the war. Frank regales Claire with stories about his ancestors, and the two secretly observe a Druid ritual at an ancient stone circle on the hill of Craigh na Dun. The following morning, Claire returns to the site and places her hand on one of the standing stones after hearing a strange noise.

“People disappear all the time…most are found, eventually. Disappearances, after all, have explanations. Usually…”

When she comes back to her senses, Claire is standing in the same spot, but immediately feels that something is off. Her mind is really blown when she stumbles upon Jonathan “Black Jack” Randall (Menzies again), a brutal Redcoat captain — and a doppelganger for her husband — who begins to assault her. Claire is rescued by a Scottish Highlander, who takes her to meet the rest of his group. She quickly proves her worth by helping heal a young rebel named Jamie Fraser (Sam Heughan). The group — led by hard-nosed, ill-tempered war chief Dougal MacKenzie (Graham McTavish) — decides to take this strange woman they just found to their home base of Castle Leoch. And I just realized that with all this talk of Redcoats and rebels, I probably buried the lead here: Claire eventually deduces that she has traveled back in time to the year 1743.

Outlander is based on the best-selling fantasy/time-travel series of the same name by Diana Gabaldon, who serves as a consultant on the show and has a cameo in Ep. 4/“The Gathering.” The first novel — also called “Outlander” — was published in 1991, and so far there are eight books for Starz to cherrypick from. (With a ninth reportedly on the way.)

The series has been developed for television by Ronald D. Moore (Battlestar Galactica), who knows a little something about adapting a long-established property with a fervent fan base for the small screen. Outlander — the name refers to Englishwoman Claire’s status as an outsider in the Scottish Highlands — is much less of a radical reinvention than Battlestar. Nevertheless, the best thing this series has going for it besides its stunningly irreplaceable setting — Outlander is filmed on location — is the detail and care with which the show’s story unfolds.

There’s a lot of attention paid to Gaelic traditions and customs, which are woven into the story quite naturally as Claire becomes familiar with — and eventually fond of — her new surroundings. Outlander also gets plenty of mileage out of Claire mixing 20th century sensibilities with 18th century resources in her role as a healer. For me, the science vs. faith stuff is better when it’s handled with a light touch — a rebel is dumbfounded when Claire mentions “germs” — than when things get a little heavy-handed. (Claire’s methods are regarded as magic, and she clashes with a fanatical friar over the treatment of a seemingly-possessed boy in Ep. 3/“The Way Out.”) In fact, Outlander sweats the small stuff to the point that this first-half of season 1 is a bit lacking in the sort of jaw-dropping moments that will leave you desperate to find out what happens next…at least until the very last shot of the mid-season finale/“Both Sides Now.”

But let’s be real here: Outlander fans aren’t tuning in to delight in the minutia of 18th century Scottish history. They’re likely tuning in to be swept away by an unabashedly romantic story about a heroine torn between two men (and two time periods). On those merits, Outlander mostly delivers, even though things don’t truly get steamy — at least by Starz standards — until Ep. 7/“The Wedding.” (The rest of the first season is barely more risqué than something like the CW’s Reign; Outlander *does* have a clear edge, however, in the gruesomeness of its battlefield injuries and floggings.)

A good portion of the credit goes to the performances, especially Balfe’s work as Claire. The actress has a tricky balancing act at all times; she has to play authoritative and overwhelmed, guarded and open-hearted. Even when Claire is in a passive position, Balfe finds a way to exude command. In fact, she might be a bit too commanding since she sometimes makes Heughan’s Jamie feel boyish by comparison. Some of this is intentional (and plays into some fantasies, I suppose), since the actor nicely captures Jamie’s purity and good intentions. The two have good chemistry, and Heughan makes for a properly swoon-worthy romantic hero. (Even if Jamie’s grooming feels a little too meticulous for 18th century Scotland.)

I also really enjoyed Menzies’ dual performances as both Frank and Black Jack Randall. He gives Frank shades of darkness — especially in the finale, when he becomes desperate to find his vanished wife — while being coolly controlled as the gleefully sadistic Black Jack. Despite the fact that Claire and Frank only spend the first half of the first episode together, the show and the actors do a nice job of making that feel like a bond worth agonizing over, as Claire continues to fall for Jamie in a different time period. McTavish’s cranky Dougal also gets some dimension as the season wears on, and I’m intrigued to see what Lotte Verbeek does as Geillis Duncan, a wily ally (so far) of Claire’s.

Outlander: Season One, Volume One features all eight episodes on two discs. Special features include “Outlander: An Epic Adaptation” (Disc 1) in which Gabaldon reveals that she was inspired to write the first story after watching a Doctor Who episode, and the self-explanatory “Authentic in Design: The Dresses and Kilts of Outlander” (Disc 2). There’s also a Blu-ray edition available with more special features that almost certainly enhances the show’s terrific production values even more.

The second half of season 1 is set to return April 4. This particular batch of episodes is very easy to get through and serves as an effective introduction into Gabaldon’s literary world.