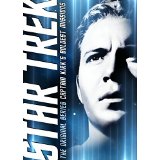 “Space…The Final Frontier. These are the voyages of the Starship Enterprise. Its 5-year mission: to explore strange new worlds, to seek out new life and new civilizations, to boldly go where no man has gone before!”

I wish I could say that this new 2-DVD set of Star Trek episodes had gone where none had gone before. Instead it’s merely a release of eight original series episodes on two DVDs. The only extras are a couple of very short Shatner interview clips on leadership, the captain’s logs and his death scene in Generations. There’s nothing new about any of this. Fortunately, the selection of episodes is a pretty solid one.

Some of them are among my favorites:

City On The Edge Of Forever: Ellison never stops complaining, and I hate the guy, but was there ever a more dramatic and emotional episode? One of the best episodes of Trek in all of its incarnations. Joan Collins stars in one of the most emotional moments in the series.

Mirror Mirror: Spock with a beard. That’s what I never forgot from the early days of seeing the episode. The Mirror universe was once the potential script for a film that never materialized. The world did make itself rediscovered in DS9 episodes and one of the best Enterprise arcs for that show’s entire run. We often wondered just what kind of an Enterprise that Kirk did encounter when he returned.

Balance Of Terror: This claustrophobic Run Silent Run Deep knockoff was some of the best drama Trek ever delivered. It also features future Spock’s father Mark Lenard as the Romulan captain. The interplay between these two captains is particularly appropriate for a “Captains” collection.

Some of them are still quite good:

The Corbomite Maneuver: This was an early episode that was silly, on the surface. Clint Howard’s baby-faced alien was a bit of a camp moment in the show. Where the episode really shines is in how it tells the story of the characters and how they interact. It’s the first time we get to see that dynamic at its height.

The Doomsday Machine: William Windom puts in one of the best guest roles as Decker (related to the film’s character), a man obsessed with a planet killer that destroyed his ship and killed his crew. It’s an obvious Moby Dick analog, and that theme plays out often in the Trek universe. This is one of the best of the new effects. The machine was quite lame in the original episode and looks far more menacing here.

Still, a couple are poor choices for a best-of collection:

Return To Tomorrow: Ugly? One word. Diana Muldaur. She’s Aunt Esther ugly. Shatner gets a lot of flak for the over-the-top acting moments. This one contains perhaps the best example of Bill hamming it up when Sargon enters his body.

The Conscience Of The King: Kirk and Riley are two of the last people alive who can identify a genocidal leader. He’s posing as a Shakespearian actor with a traveling troupe on the ship. It’s slow with far too many over-the-top attempts at the Bard himself. By far one of the dullest missions of the original Enterprise.

Of course, one can always argue the selection. The only obvious omission is Arena, which is one of the most Captain-Kirk-focused episodes of the show. It happens to be one of my favorites. The Tholian Web would be another of Kirk’s best episodes. They got it right here more times than they didn’t.

No one and nothing is ever dead in the Star Trek universe. With the remastered shows taking center stage and the films now all newly remastered, I thought we’d seen the last of these collective sets. With the last release I thought I heard the unmistakable voice of DeForest Kelley announce: “It’s dead, Gino”. Alas, the temptation to double dip was too much for Paramount to resist, and a new release is upon us. I guess there is just too much time before the next film hits the box office and a decision is made whether to continue with the HD remasters on Deep Space Nine. It’s hard for the studio to not have a Trek release out there, and this is how you do it.

Gino Sassani is a member of the Southeastern Film Critic's Association (SEFCA). He is a film and television critic based in Tampa, Florida. He's also the Senior Editor here at Upcomingdiscs. Gino started reviewing films in the early 1990's as a segment of his local television show Focus. He's an award-winning recording artist for Omega Records. Gino is currently working on his 8th album Merchants & Mercenaries. Gino took over Upcomingdiscs Dec 1, 2008. He works out of a home theater he calls The Reel World. Favorite films: The Godfather, The Godfather Part II, The Body Snatcher (Val Lewton film with Karloff and Lugosi, not the pod people film), Unforgiven, Gladiator, The Lion King, Jaws, Son Of Frankenstein, The Good, The Bad And The Ugly, and Monsters, Inc.
Halo: Nightfall Vice (Blu-ray)