Posted in: Disc Reviews by Brent Lorentson on March 18th, 2015 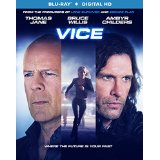 What if there was a place where you can act out your wildest fantasy, whether it be murder, theft, or sex, and at the end of the day you could go home as though nothing happened?  That is the tease Vice offers its audience in a sci-fi action film that blends bits of Blade Runner, Stange Days and Westworld into one tight little package.  For fans of the sci-fi genre, the movies I reference are staples in the genre, but let me be clear; at no time does Vice measure up to these films. When we meet Kelly (newcomer Ambyr Childers), she is an android leading a life behind the walls of VICE where she is programmed to live the same day over day after day.  For all androids within the walls of VICE, they all are living out a Groundhog Day life, only what changes are the outsiders that pay to do some pretty horrible things.  I feel a little horrible saying this, but I wish we got to see more of these horrible activities take place, and in a weird way I think that’s the most obvious plot hole of the film.  Why is there not constant mayhem occurring behind these walls?  In a world where it is a free for all to kill and maim these androids; instead filling the background are well-to-do folks just minding their own business and sipping martinis.  This is still Kelly’s life, and early on we see her in a violent encounter that leaves her and her friend dead.

Being dead means very little to an android who has their memory wiped every day, so after Kelly is patched up she is ready to function for another day and face whatever violent act awaits her.  That is till she starts having flashbacks from her previous memory swipes, and we get to see she has been a part of some pretty cruel activities.

Julian (Bruce Willis) is the ringleader to all this madness and watches over VICE from his headquarters that is filled with monitors covering the entire facility.  Let’s face it, this was simply a cash grab for Willis where he got paid to say a few lines, look menacing, and he called it a day.  There’s nothing wrong with that, and in this role, well, there isn’t much that needs to be done with the role, since all he really is doing is playing the man behind the curtain who controls VICE.  Other characters discuss the misdeeds of this character, but it’s nothing we ever get to see.  So for those of you hoping this was going to be Die Hard meets I Robot, sorry, this is not that film.

Instead it really is just about Kelly trying to understand what is going on as she struggles to elude being captured beyond the walls of VICE.  The big escape from VICE draws the attention of a match-chomping detective, Roy (Thomas Jane) who has always had it in for VICE and all it stands for, and of course he stumbles onto Kelly’s trail and has the dilemma of helping her or not.

These are all story points we’ve seen many times before, and unfortunately we’ve seen it done better many times before.  The film has good ideas and so much potential, but in the end it just doesn’t deliver.  While the film isn’t awful by any means, it’s just eye candy that just limps along, and it’s frustrating, because this should be a better film rather than just being recycled celluloid.

Vice is presented in an aspect ratio of 1.85:1.  The 1080p image is arrived at with an AVC MPEG-4 codec at an average of 20 mbps.  The film looks the part of a slick, futuristic sci-fi action flick with its washed-out color and cold steely blue filters, but the image is just never compelling.  What is missing is depth, and with the saturation of the image there is a lot of detail lost as well.  Even worse for the film is that it is virtually all shot at night and mostly in dark locations in digital, so the blacks become a bit crushed at times.  The flesh tones are a bit pale, but I believe this was more intentional for the look of the film considering it being about artificial intelligence.

The DTS Master Audio 5.1 track is a mixed bag of standard action fare with some nice impacts with the scenes with gunfire and foot-chase sequences. The dialog is a bit soft but is clear.  The issue I have is that the track is not fully immersive in the action going on.  It’s not a bad mix, but there is definitely a noticeable difference when hearing this track from a bigger-budget effects-heavy film despite their efforts.

Audio Commentary:  This commentary track is with the director Brian A. Miller as well as his cast Amber Childers and Bryan Greenberg.  Though the trio manages to keep things rolling throughout the entire track, it’s unfortunate there wasn’t too much about the process of getting the film made.  There are many anecdotes about cast experiences, most of which we hear in the interviews, but on the technical side of things there isn’t much offered here.

Behind the Scenes of Vice: (12:47)  Basically this is a feature where the cast and crew is interviewed, and most of it is filled with how much everyone loved working with everyone and how great Bruce Willis is.  Playing over the interviews there is some behind-the-scenes footage of the film being made at least.

Interviews: A collection of interviews with the director, writers and lead cast members (no Bruce Willis).  There isn’t anything too different from the interview segments in the making-of segment.  It’s a shame we couldn’t have gotten an interview with a member of the special effects team or camera operator just to get a technical point of view of the production.

The Blu-ray also comes with a digital download of the film.

While the film isn’t awful, it wants to be a modern Blade Runner meets I Robot, but unfortunately it doesn’t have the budget to pull off such a massive feat.  I appreciate the effort, but the result is recycled storylines we’ve seen before with some decent performances.  The biggest take away from this: Ambyr Childers is an actress to keep an eye on down the road.

Brent Lorentson is a horror writer and film critic based out of Tampa, Florida. With a BA in Digital Film, he co-wrote and co-directed Scavenger Hunt. His short stories have appeared in various horror anthologies. In 2019 his short script Fertile Blood will be a part of the anthology horror film Slumber Party. He is currently working on his first novel A Dark and Secret Place set to be released in late 2019. Favorite Films: Taxi Driver, Fight Club, I Saw the Devil, The Wild Bunch, Dawn of the Dead, A Clockwork Orange, Pulp Fiction, Heathers, The Monster Squad, and High Fidelity.
Star Trek: The Original Series – Captain Kirk’s Boldest Missions Live At Knebworth (SD Blu-ray)