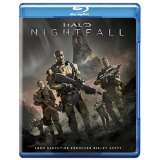 It’s been about a decade since Hollywood first tried to make a movie out of Halo, the blockbuster Xbox videogame series. The closest fans came to seeing Master Chief on the big screen was a 2006 adaptation with Peter Jackson serving as executive producer and his then-protégé Neill Blomkamp directing. Unfortunately, development costs started to skyrocket and the duo opted to make District 9 instead. Meanwhile, Halo remained a potentially-lucrative multimedia property. So Microsoft, which owns Xbox, finally decided that if they wanted a Halo movie done, they had to do it themselves.

Nightfall is actually the second live-action offering set in the world of Halo, following 2012’s well-received Forward Unto Dawn. Each of them originally aired as five-part web series aimed at Xbox users, and both had higher production values than what you’re accustomed to seeing in that medium. Expectations for Nightfall were even higher after Ridley Scott signed up as an executive producer. (I mean, it couldn’t be worse than the stuff he’s been directing lately?)

“This is supposed to be a time of peace.”

The story picks up in the 26th century following a long war between humanity and an alien alliance known as the Covenant. Jamison Locke (Mike Colter) is a legendary agent with the Office of Naval Intelligence (ONI), an elite and covert military branch. Locke and his team are investigating terrorist activity on what they consider to be a backwater colony called Sedra. The team tangles with an unsavory character who unleashes a biological weapon that only affects humans. Locke traces the weapon’s origins to a fragment of Alpha Halo, one of seven enormous ring worlds.

Fearing that the Covenant could have the perfect tool to wipe out humanity, Locke leads a team to the Alpha Halo so they can destroy the unique element that is the essential to creating the weapon. He enlists the help of a group of Sedrans, including Col. Randall Aiken (Steven Waddington) and Macer (Christina Chong), a young militia member eager to prove she can hang with the ONIs. Unfortunately, the surface of Alpha Halo is way too hot for any human to survive…except when the planet is temporarily shrouded in relative darkness. As a result, Locke and his team race against the clock to detonate a nuke on the planet and (if at all possible) escape with their own lives before things really heat up.

As I mentioned before, Nightfall was originally presented in five different increments, which is a problem for a story that doesn’t really get good until its latter half. (Reviews of the show’s first episode were not kind.) The criticisms are understandable; early on, the things you’re likely to notice include the surprisingly good production values — I assume the famous exec producer had something to do with that — and the unsurprisingly wooden performances. Nightfall certainly looks better and more ambitious than your average web series — filming took place in Iceland — but some of the visual effects are still closer to the “SyFy original movie” end of the spectrum than they are to your average “polished Hollywood blockbuster.”

As a result, Nightfall won’t exactly dazzle you with visual panache. There’s actually a plot point that requires our heroes to strip themselves down and ditch their high-tech toys in order to survive. In fact, the film — which plays pretty smoothly in 98-minute feature-length form, especially when you consider it was originally five separate episodes — only becomes intriguing when an unexpected complication during the mission leaves nine survivors and an escape vessel that can only carry two of them. The shift toward human-on-human conflict smartly creates urgent dramatic stakes that would’ve been even more effective if we cared a lick about any of these people. (And if it weren’t so obvious who the last two survivors would be…and who would sacrifice themselves for the greater good.)

Colter — who will soon be seen as Marvel’s Luke Cage on Netflix — cuts a fine, striking figure as Locke. And Waddington offers a welcome spark playing the curmudgeonly Aiken, who has an intense mistrust and dislike for ONI. But despite their best efforts, all the actors are saddled with playing one-dimensional characters.

Which is not completely surprising when you consider Nightfall is essentially an advertisement/appetizer for the upcoming game, “Halo 5: Guardians.” Locke is set to be a main character in “Halo 5” and fans of the series will likely enjoy seeing some of the game’s baddies (hunter worms) and weaponry on screen here. Nightfall certainly isn’t the Halo movie fans are desperate to see, but it still makes for a decent diversion until the new game arrives on your console.