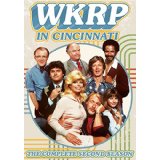 “Baby, if you’ve ever wondered, wondered whatever became of me. I’m living on the air in Cincinnati,
Cincinnati, WKRP. “

It almost sounds like a take on Harry Chapin’s WOLD, and in many ways it is. The song was hot for a while on radio stations. It seems that DJ’s couldn’t resist songs about DJ’s. Who saw that coming? Of course, the song is the opening theme to WKRP In Cincinnati. The show is back on DVD thanks to the folks at Shout Factory. If that’s not big news, this absolutely is. It’s back with most of the original music intact including the opening and closing themes. For fans of the show, it’s the news we’ve been waiting for for decades now.

“Got kind of tired packing and unpacking, town to town and up and down the dial. Maybe you and me were never meant to be. Just maybe think of me once in awhile.”

It shouldn’t come as any surprise that WKRP has had a troubled release life. The show was in trouble from the moment it first aired. The CBS powers that be were never completely sold on the show, and it was pulled literally after airing only a handful of episodes. Poor ratings appeared to have killed the show before it even started. For some reason the show ended up getting a slight re-tool and was put back on the air after the holidays in early 1979. There were no cast changes, but the sets were spruced up a bit and a bullpen set was created to give the characters a common room in which to interact. This set created one of the show’s most memorable running jokes. Les Nesman believed he should have had his own office and drew lines around his desk including a broken line where the door should be. He required others to open and close the non-existent wall or he would throw a fit. The show returned with an unusual clip show. Almost unheard of for a show only five episodes old. But it was intended to bring the audience up to date with the show’s restart.

After 90 episodes the show had been moved around so much that the ratings never did catch fire. Even with lead-in shows like M*A*S*H the show never found a stable audience. When it was cancelled, no one ever expected to hear from it again. But, like Star Trek before it, the show found a growing cult following in syndication. Some of the cast eventually reunited for a follow-up series called The New WKRP In Cincinnati. It lasted almost three years in syndication but never captured the popularity of the original show during its syndicated years.

The show’s format was pretty simple. WKRP was the 18th-ranked station in an 18-station market. The station manager was Arthur Carlson, “The Big Guy”, played by Gordon Jump. He was really an overgrown child working for his mother who owned the station. He avoided anything that remotely resembled responsibility, preferring to remain sequestered in his office playing with toys or fishing rods. He relied on the receptionist Jennifer Marlow, played by Loni Anderson, to protect him from the real world. Both the character and the actress were there for their looks, and the show didn’t go to any lengths to be apologetic about it. It was the subject of a great amount of the show’s humor. She was the highest-paid member of the station’s staff, just as Anderson at one time was. She pushed for the extra dough and got it.

The station’s sales manager was Herb Tarlek, played by Frank Bonner. He was your stereotypical used car salesman. He was married but constantly hit on Jennifer. It was another of the show’s running gags that found her finding new insulting ways to put Herb in his place. The news was run by Les Nesman, played by Richard Sanders. He was as inept as they come. He coveted his “Buckeye News Awards” and his “Silver Sow” presented because of his hog reports. He saw communist conspiracies everywhere and was so dimwitted that he often didn’t know when he was being made fun of.

The station had settled into its beautiful-music format when Carlson hires Andy Travis, played by Gary Sandy, to turn the station around. He wants to prove to his mother that he can make money with the station. Of course, that means changing the format over to rock ‘n’ roll. That doesn’t sit well with the station’s establishment. Only DJ Johnny Caravella is excited about the change. He was a washed up star DJ from L.A. who had been fired for saying “booger” on the air. Since then he’d been the “up and down the dial” voice mentioned in the theme song, changing the last name with each stop. With the change he becomes Dr. Johnny Fever and delivers his prescription of rock music. He was played by Howard Hesseman who became one of the show’s standouts.

Travis also brings in his own star DJ for the night shift. That’s Venus Flytrap, played by Tim Reid. He was just the shock to the establishment that Travis was hoping for. He was a black man in an all-white station. He burned incense during his show and had a gong for effect.

The final piece of the staff puzzle is Bailey, played by Jan Smithers.

The humor was mostly found in the interaction of these characters. They were almost all over-the-top, and obviously no one in their right mind would keep them on at a radio station. In one episode Travis realizes this and it depresses him that he may be stuck at the bottom forever now. Other humor came from the station’s lowly position and the crazy stunts they tried to become relevant. One of the most remembered episodes, and part of TV Guide’s 100 best-ever television episodes, is an early Thanksgiving show. Carlson hatches a plan to release turkeys on a city shopping center. He doesn’t know they can’t fly and drops them from a helicopter with disastrous results. While you never see the stunt, the show cleverly uses Nesman’s on-the-scene news report to capture the insanity. It’s a clever presentation that you will remember for a long time. Fans of the show already do and are looking forward to seeing it again.

The first two seasons saw many classic episodes. Some I hadn’t forgotten in over 30 years. A Commercial Break finds the head of a new chain of funeral homes buying huge amounts of time on the station. Everybody is thinking raises, and they all chip in to produce a really awesome commercial for the chain. The commercial is one of the best laughs of the series, and you’ll find yourself humming it for weeks after you see it. The Contest Nobody Could Win is another absolute gem. Johnny accidentally announces a prize amount of $5,000 when it was supposed to be only 50 bucks. Now the station has to put together clips from six songs so tightly that no one could possibly get the answer… until they do. Again it’s that contest blurb that I never forgot that stands out here. In Concert commemorated a tragic day in concert and Cincinnati history. Most people my age remember rock concerts were cheap with something called festival seating. You paid like seven bucks and then you crowded the door at the event because you could sit anywhere. It was first grab, first sit. December 3, 1979 all of that changed when a group of kids attending a Who concert heard what they thought was the concert starting. It was merely a sound check or roadie warm-up. They stampeded the doors, and 11 of them were trampled to death. That was the end of festival seating, and the show could not ignore such a huge rock ‘n’ roll story in the station’s own back yard. They treated it with great respect here, and it became part of a memorable day. The Americanization Of Ivan features Elton John’s Tiny Dancer as a theme for a Russian defector who is in love with a dancer. He defects at the station and puts WKRP in the middle of an international incident. These were the waning days of the Cold War, and this was one of my favorite episodes. It’s another example of how important the music was to the story being told.

Now the first two seasons are out, and this is a must-have release. I talked about a troubled release history. The network originally tried to release the first season on DVD years ago. Because of the cost to get the music to all of the rock songs used, they changed the music including a theme song. You have to understand that the music was an integral part of the stories and the appeal of the show itself. Without those original tunes the show falls rather flat, and that’s exactly what happened to those first-season discs. Needless to say, there were no follow-ups, and I had truly lost hope that we would ever see the show released on home video. I had put the odds better of getting the 1960’s Batman on disc before WKRP. I was right by a few months. Now, I have to warn you that I’m told there are still a couple of substitutions. Some bands do not allow their music to be licensed at any price. I am still pleased with the result. This is the best possible at any cost, and Shout has done everything they can to deliver the show as exactly as they could. Just as I encouraged you folks not to buy the original release to show your anger at the music issues, I’m encouraging you now to go out and support this attempt. It’s the only way you are going to get to see the rest. Let’s give Shout Factory a really loud… well… shout, and pick up these episodes now. If you’re looking for me, well, that’s easy. “I’m at WKRP in Cincinnati.”

Gino Sassani is a member of the Southeastern Film Critic's Association (SEFCA). He is a film and television critic based in Tampa, Florida. He's also the Senior Editor here at Upcomingdiscs. Gino started reviewing films in the early 1990's as a segment of his local television show Focus. He's an award-winning recording artist for Omega Records. Gino is currently working on his 8th album Merchants & Mercenaries. Gino took over Upcomingdiscs Dec 1, 2008. He works out of a home theater he calls The Reel World. Favorite films: The Godfather, The Godfather Part II, The Body Snatcher (Val Lewton film with Karloff and Lugosi, not the pod people film), Unforgiven, Gladiator, The Lion King, Jaws, Son Of Frankenstein, The Good, The Bad And The Ugly, and Monsters, Inc.
Pioneer (Blu-ray) Exodus: Gods & Kings (Blu-ray)