Posted in: Disc Reviews by Brent Lorentson on March 23rd, 2015 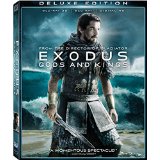 When it comes to the modern epic, director Ridley Scott is the go-to guy to pull off the sprawling and mega-budget storylines.  From Gladiator to Kingdom of Heaven, Scott has constantly proven himself behind the camera in executing tales with lavish sets and battles involving hundreds to even thousands of extras.  With the release of Exodus: Gods and Kings, a retelling of the Bible story where Moses frees the slaves of Egypt, Ridley Scott would seem the perfect choice for this film.  Unfortunately, this is a Bible story that is sure to anger religious scholars and put some general audiences to sleep.

Let me jump ahead and say I’m an unapologetic fan of Ridley Scott; this is my favorite working director.  From his early work like Alien, Blade Runner and Legend on into his later films like Gladiator, Matchstick Men, Black Hawk Down and Prometheus, he has entertained me for years.  But lately I feel he’s been swinging for hits but missing more than he has delivered.  Last year’s release of The Counselor was a misstep that should have been a knockout hit but instead just was a disappointment in many ways, which brings us to Exodus: Gods and Kings and its frustrating retelling.

Whether you are a religious person or not, I assume you know the general story of Moses and the plagues on Egypt; if anything numerous TV shows and films have used the plagues for plot devices in their storylines.  The most familiar telling of the story is in the film The Ten Commandments; before going into this film do yourself a favor and forget the legendary film from Cecil B DeMille ever occurred, or you’ll simply be nitpicking to yourself throughout the whole film, because this isn’t a remake of that film.  Instead what Scott attempts to do is tell us the most “scientific” explanation for what occurred in the process of freeing hundreds of thousands of slaves.

Christian Bale hangs up his cape and cowl to now take on the role of Moses.  In many ways this is the biggest role Bale has ever stepped into, and though he does an admirable job, he just doesn’t deliver as the man of royalty falls to become a man of exile who later would become a leader of the Hebrew people.  In many ways the role reminded me a lot of Maximus from Gladiator; perhaps had Russell Crowe not been involved in his own biblical retelling he could have been a better choice to carry this film.  But as we get into the portion of the story where the exiled Moses moves on to start a life of his own, finding a wife and eventually having a child, in this portion of the film Bale shines.

As for Ramses (Joel Edgerton), we meet him while he is still only the prince of Egypt and is waiting for the Pharaoh Seti (John Turturro) to finally die of sickness so he can take on the throne.  We don’t get to see much of Moses and Ramses together, which is one of the blunders this film encounters.  We never get to experience how these two were raised as brothers, though of course Moses was always treated differently since he had no blood connection to the throne.  All the film presents us with is the threat Ramses sees in Moses, but there is never a suitable amount of conflict between them.

For those in the audience wondering where all the plagues and wrath of God kick in, well, you have a little more than an hour wait, but when the events do kick in, the film changes gears.  This is a portion that most audiences seem to have a problem with simply because Scott decides to take a more “scientific” approach rather than allow for the events to seem so mystical.  Even when we see God present himself as I AM to Moses, those viewing can look at these scenes as one of two ways, one as this being God speaking with Moses in the form of a child or from the perspective that Moses is hallucinating after taking a fall in a mudslide.  How you view this I would imagine will adjust how you view the rest of the film.

As the events build and lead to the ultimate confrontation along the Red Sea, as I’m sure by now you’ve seen from trailers Scott has chosen to avoid the classic image of the sea parting and becoming two giant walls of water.  I actually dug the direction he took, and for the sake of some readers who may not know I won’t spoil this, but is a sequence that is on a grand scale and is executed with some excellent use of modern technology.

Even with the great effects and giant battles, what Exodus: Gods and Kings left me with was that when it all ended there was nothing that stuck with me.  The film goes through the motions of being this grand epic film, but I simply felt that the heart and passion was left from this film.  This frustrates me, because this is a film that I feel should have been bigger in every way.  The casting of Aaron Paul and Sigourney Weaver just seemed wasted and seemed as though the meat of their parts found their way on the cutting room floor.  But worse is the miscasting of John Turturro as the Pharaoh; normally I love seeing Turturro on the screen, but to step in as the powerful leader, he just didn’t project the presence needed to execute this role.

Exodus is presented in its original aspect ratio of 2.40:1. The 1080p image is arrived at with an AVC MPEG-4 codec at an average 30 mbps. Whatever you might think about the film itself, you won’t be able to deny that the film looks spectacular. This high-definition image presentation captures all of the incredible visuals from the film. We didn’t get to review it in 3D as it appears to not have been released in that format. Still there is wonderful sharpness and detail here. Black levels are impressive, offering nicely rendered inky blacks. It all looks as Scott intended it to look, and that’s a high standard for any home video release.

The DTS-HD Master Audio 7.1 is also quite impressive. This is a far more explosive film than The Ten Commandments. That means impressive subs that rock the room at times. Dialog comes through it all untouched by the madness that might surround it. Surrounds open up the immersive experience with often just the subtle hint of a far off sound. When the sea comes rushing back, you will absolutely feel engulfed by the crashing water.

There is an Audio Commentary with Ridley Scott and Jeffrey Cain. They are not together, and the commentary switches between them. Cain offers Biblical connection and historical data, while Scott gives us more of his thoughts and processes. We learn there is footage here originally shot for Prometheus. Scott also offers some of his thoughts on the way the studio system works in making large films.

Exodus Historical Guide: This is a viewing mode that throws historical data on the screen as you watch the movie.

Deleted And Extended Scenes: (14:57) There are nine with a handy play-all option. Interestingly enough these are offered in both 3D and 2D. I was hoping for something more here to hint that an extended version might make this a better film ala Kingdom Of Heaven. That’s not the case, at least not here.

Just as the case was with Kingdom of Heaven, that when a longer director’s cut was released it changed my outlook on the film, I hope the same can be said about Exodus; please, this cannot be the definitive cut of the film.  Unfortunately, till a longer cut is released possibly, the exodus that will follow will be the stream of disappointed filmgoers as they exit the film.

Brent Lorentson is a horror writer and film critic based out of Tampa, Florida. With a BA in Digital Film, he co-wrote and co-directed Scavenger Hunt. His short stories have appeared in various horror anthologies. In 2019 his short script Fertile Blood will be a part of the anthology horror film Slumber Party. He is currently working on his first novel A Dark and Secret Place set to be released in late 2019. Favorite Films: Taxi Driver, Fight Club, I Saw the Devil, The Wild Bunch, Dawn of the Dead, A Clockwork Orange, Pulp Fiction, Heathers, The Monster Squad, and High Fidelity.
WKRP In Cincinnati: Seasons 1 & 2 The Hobbit: The Battle of the Five Armies (Blu-ray 3D)