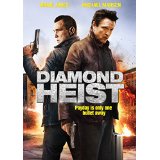 There’s a mile-long list of Hollywood movies that have been re-titled in foreign countries to hilarious effect. I’ve personally had much less experience with foreign productions being re-branded for American audiences, but Diamond Heist seems like one of the more egregious examples you’re likely to find. The DVD cover has professional tough guys/straight-to-DVD MVPs Michael Madsen and Vinnie Jones brandishing weapons while accompanied by a vague explosion and the wonderfully generic tagline, “Payday is only a bullet away.” In other words, there’s nothing here that suggests this Hungarian import is actually an action/comedy about male strippers.

To be fair, when you read back the key parts of that last sentence — “Hungarian action/comedy about male strippers” — it’s not hard to see why there was some re-tooling in order to maximize the film’s prospects in the U.S. Diamond Heist was originally titled Magic Boys, even though the Chippendale’s-style action is less Magic Mike titillating and more Full Monty slapstick.

Terence (Madsen) is a former male stripper who now owns his own nightclub in London. We know this because there’s a gigantic graphic that says “London” and not because Madsen attempts to do a British accent. (It probably would’ve gone as well as Al Pacino doing an English accent.) In addition to his entrepreneurial pursuits, Terence is also a diamond smuggler who — as the opening credits show — is not above sneaking in some precious stones tucked inside a G-string.

When two of Terence’s dancers go missing, his old diamond smuggling partner Jack (Jones) conveniently offers two of his own recruits. (I suppose every respectable European gangster has male strippers on speed dial.) Enter the Magic Boys, a buff Hungarian duo that is meant to infiltrate Terence’s diamond operation. Around this time, we also meet David (Csaba Pindroch) and Zoli (Gyozo Szabo), a pair of hard-luck losers associated with Jack’s business who end up on the run. In a desperate move, they assume the identity of the Magic Boys and fly to London. Meanwhile, Terence has also hired an alluring pilot named Cherry Valentine (Jamelia) to be his courier, but Cherry might have ulterior motives of her own.

Two quick things: 1.) You know the Reese’s Peanut Butter Cup slogan “two great tastes that taste great together”? Well the combination of male strippers and diamond smuggling are two weird tastes that (surprise!) end up tasting pretty weird together. 2.) In summarizing the plot of this movie, I feel like I’ve *way* oversold how big of a part the titular Diamond Heist plays in the story.

Directors Robert Koltai and Eva Gardos could have really committed to their crazy concept and potentially pushed it into “so insane, it’s brilliant!” territory. Instead, the Hungarian filmmaking duo appear content to make a sub-Guy Ritchie crime farce (even hiring Ritchie regular Jones), but with very little of the filmmaker’s rat-a-tat energy and kinetic visual flair. Diamond Heist has a few moments of inspired comedy, mostly involving David and Zoli’s bumbling efforts to become good at stripping. Unfortunately, the vague, flickering bright spots in this movie are clouded by a plot that bounces back and forth between incoherent and unnecessarily convoluted. (Cherry’s motivations, for example, are so murky that by the time they become apparent, the audience is way past caring.)

I’ve had the displeasure of watching Madsen sleepwalk through no-budget dreck — there’s so much of it — so I was somewhat delighted to actually see him seemingly engaged with this character and performance. Unfortunately, he and Jamelia — a singer/model/actress, in that order — have anti-chemistry. Jones essentially plays the same steely-eyed criminal as always, but with little of the swagger and charm he’s shown he can bring. Pindroch and Szabo make for a reasonable enough comedic duo, but the pair’s lighter storyline feels like it’s occurring in a different movie.

The only interesting thing about Diamond Heist — or Magic Boys or whatever the heck it wants to call itself — is how strange it is. That’s why changing and homogenizing the film’s packaging is such a major misstep, in my opinion. This is certainly a bad film and a step above certain SyFy-level dreck, but I have to downgrade it for the bait-and-switch it pulls on potential viewers. (The movie’s original poster is equally deceiving!) At least a movie like L.A. Apocalypse is honest and straightforward about its awfulness.