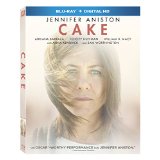 Despite being one of the most successful actresses in Hollywood for the better part of 20 years — Friends premiered in 1994 — it’s been all too easy to dismiss Jennifer Aniston’s big screen resume. Until recent sexpot roles in broad comedies (We’re The Millers, the Horrible Bosses two-logy), most of her hits (Bruce Almighty, Along Came Polly, The Break-Up, Marley and Me) were girlfriend/wife roles that didn’t stray too far from the Rachel Green mold. Cake made less than $2 million at the box office, but it’s also the first movie that made me excited about Aniston’s movie career.

“Are you always such a f—ing shrew?”

Cake is about Claire Bennett (Aniston), a former lawyer living in California who is dealing with severe chronic pain. (And up until this film, I might’ve taken a cheap shot involving “chronic pain” and Aniston’s filmography.) The movie opens with Claire savagely mocking her drippy support group, which recently had one of its members named Nina (Anna Kendrick) commit suicide.

Claire becomes drawn to the circumstances surrounding Nina’s suicide and to the family she left behind, which includes wounded widower Roy (Sam Worthington). Claire’s devoted housekeeper/caretaker Silvana (Adriana Barraza) is along for the ride as the movie gradually reveals the tragedy that resulted in Claire’s physical and emotional scars, and led to her nice-guy husband (Chris Messina) to move out.

The movie is directed by Daniel Barnz, who opts for a largely naturalistic approach that contrasts nicely during any dream/fantasy sequence where Claire interacts with Nina. (Not a spoiler, unless you really thought they’d cast someone of Kendrick’s stature to play a portrait in the opening support group scene.) Those sequences are a jarring, but necessary bit of vulgar whimsy given the grim subject matter.

Patrick Tobin’s sharp, thoughtful script captures precisely how manipulative someone in Claire’s predicament can be, whether she’s putting on a friendly face for a genial doctor (Lucy Punch) or berating Silvana. Speaking of Silvana, I also appreciated that the movie took a couple of scenes to show us she was a living, breathing character in her own life and not just a minority sidekick to (literally) prop up the main character. I’d say the one misstep is the script’s view on therapy support group; it’s unclear if the movie agrees with Claire’s early mocking or if it’s trying to convey they have real therapeutic value. (Felicity Huffman plays the support group leader, and real-life husband William H. Macy also shows up for a tiny, pivotal scene.)

Aniston’s vanity-free performance has been rightly praised, but the reasons she’s great in this movie go beyond her “bravely” choosing to appear on screen without makeup. To her credit, Aniston has taken indie swings before (The Good Girl, Friends with Money), but this feels like the least self-conscious one. Ten seasons on Friends honed her comedic timing, which is a big asset whenever Claire tosses off one of her prickly insults. Of course, her most valuable quality is the “America’s Sweetheart” likability that keeps you on Claire’s side even as she rudely alienates everyone in her life.

Barraza’s compassionate performance is a pleasing counterbalance to Aniston’s cantankerous work. Kendrick flits in and out of her handful of scenes, but is an effective presence throughout. I also enjoyed Worthington’s no-nonsense grieving as potential sad-sack soulmate for Claire. The movie sneaks in a few vignettes that could’ve easily been trimmed — including one involving a runway (Britt Robertson) that ties into the movie’s title — but otherwise makes affecting use of its 102 minute running time

Despite largely being a downer, Cake mines its subject matter for dark humor and even manages to end on somewhat of a hopeful note.

Cake is presented in an aspect ratio of 2.40:1. The 1080p image is arrived at with an AVC MPEG-4 codec at an average of 32 mbps. As I mentioned earlier, director Daniel Barnz and cinematographer Rachel Morrison largely opt for a starker, more naturalistic approach in their presentation. Since the film is set in California, however, that still results in a warm, golden hue for most of the film. The exceptions are the intentionally over-saturated dream/fantasy sequences involving Nina. Overall, this Fox Blu-ray offers a clean, blemish-free image with terrific fine detail on close-ups. (So you can see precisely how much makeup Aniston isn’t wearing.)

The DTS-HD Master Audio 5.1 track is obviously dialogue-heavy, but it also has a sneaky amount of directionality in its presentation. (When Silvana moves off-screen to fetch something from the fridge, the action is carried out in the corresponding rear speaker.) Christophe Beck’s score tends to dominate the rears (and the rest of the surround sound field) whenever it pipes up. There were also a few instances where the movie’s music would explode out of the speakers compared to the relatively quiet scene that precede it. (This happened about two or three times, so it wasn’t a serious issue.) Otherwise, the rears feature a solid amount of atmospheric noises, which results in a decent sense of immersion. Dialogue is always clear and confined to the front speakers.

The Many Layers of Cake — Learning to Live Again: (3:33) Aniston talks about drawing inspiration from stunt coordinator Stacy Courtney, who talks about her own real-life troubles dealing with chronic pain following a serious accident. The filmmakers and other cast members also pipe in to reiterate the film’s themes, and Claire’s quest to feel like a “normal person” again.

The Icing on the Cake — Meet the Cast: (3:28) Guess they ran out of corny “cake” puns, since this is the only other special feature. This mini-doc may be called “Meet the Cast”, but it’s pretty much exclusively (and justifiably) focused on Aniston’s performance.

While it’s certainly not the feel-good movie of the year, I still recommend you sample some Cake.

For Aniston apologists supporters, this movie represents validation. And for Aniston-skeptics (like myself), it’s the film that finally and fully showcases the actress’s abilities in feature-film form.