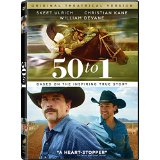 I will be the first to admit that I never watched a horse race prior this film. Just never interested me; however, it did not take long to see that 50 to 1 is more of a story about unwavering friendship; friendship between two men who had a chance encounter years before becoming a team and a friendship between a trainer and a horse that everyone has all but given up on. As cheesy as that may sound in theory, it was actually a very warm concept, and the production team manages to unfold the story in a way that makes it easy to watch.

Ten years ago, Chip Woolley (Skeet Ulrich) saved Mark Allen (Christian Kane) during a barroom altercation. Despite not knowing each other, Woolley made a spur of the minute decision to aid Allen in the fight. After the fight, the two bond briefly over their shared life in the horse race circuit before departing with Allen proclaiming that he owed Woolley one.

Fast forward to present day. Woolley has fallen on hard times. While trying his hand at training horses, he hasn’t been able to produce a winner in quite of length of time. Many question his ability as a trainer as crushing debt begins to pile up on him; there appears to be no end for his string of bad luck in sight. It is in this mindset that he reconnects with Allen. Unlike his own string of bad luck, Allen has had better times, producing a string of successful horses that have made him a nice profit. Despite his reputation and his advisor Doc (William Devane) telling him not to hire Woolley, Allen takes a chance on the only guy to come to his defense when he needed it most.

On his first assignment, Woolley is sent to scout a prospective horse. At first not being impressed by the horse due to his size and seemingly uncontrollable nature, Woolley’s opinion changes the minute Mind That Bird steps on the track and displays amazing speed. He convinces Allen to take a chance on the horse despite having to pay a steep price for him. At first Mind That Bird is a disappointment and Doc again advises Allen to let Woolley go, but good news comes in the form of Mind That Bird qualifying for the Kentucky Derby. Recognizing that this is the last shot for them both, they will have to give their all and earn their place in the history books.

So as I said early on, I don’t know anything about horse riding, but the good thing about 50 to 1 is you don’t need to to understand the film. It is an extremely relatable story with themes that everyone will be able to relate to. I wouldn’t label it a drama; if I had to pick a genre to place it under I’d probably go with subtle comedy. There is plenty of hijinks to coax a laugh out of the most stoic. Most of the comedy of the film comes from or at the expense of Kane’s character, who is also probably the easiest to play given that his character doesn’t seem capable of taking anything seriously. Despite being incapable of being serious, Kane does bring a certain level of southern charm to the character, and that endeared him to me. I also had a little sympathy for Ulrich’s character given his string of bad luck and his willingness to bet it all on one long shot in hopes of turning everything around. It takes a particular mindset to bring that kind of desperation across on the screen, and Ulrich does it with ease.

It was good story, though it did deviate from the point a few times in hopes of adding a subplot that would reveal a softer side to two of the characters such as Woolley and Alex (Madelyn Deutch) who were at odds in the beginning but found common ground towards the middle of the film. All things considered, the character of Alex, although interesting, was a somewhat unnecessary character. She doesn’t serve any real purpose to the overall telling of the story if you ask me. Another point, though, we have a good idea of the tight position Ulrich’s character is in, and he does convey it nicely, I think the story went a little light on bringing that to the attention of the audience. I think showing a little bit more desperation could have made the point a bit more strongly.

In conclusion, it is a good story and easy to follow even for a laymen like me. If horse racing is your thing, I’m sure you will love it. In fact, I’m pretty sure that even if horse racing isn’t your thing that you will be able to find a few things to like about 50 to 1; I know I did.

Jeremy Butler is a film school graduate of the International Academy of Design and Technology. He is been writing for Upcomingdiscs since 2012; however, movies have played a big part of his life for much longer. Favorite genres include horror, science fiction/fantasy, and comedy. Favorite movies are V for Vendetta, Boondocks Saints, Kiss Kiss Bang Bang, and The Godfather.
Apparition Bar Rescue: Toughest Rescues